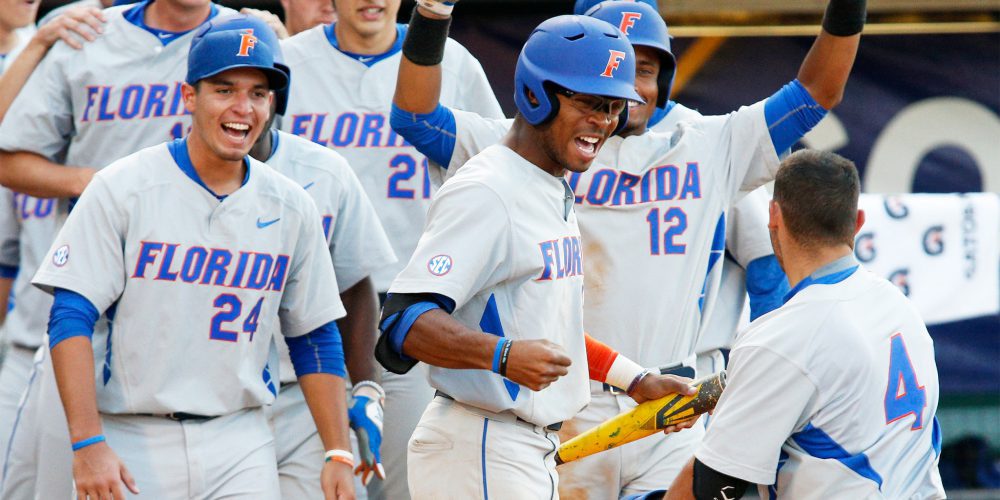 Florida should have plenty of reasons to celebrate in 2016. (UF)

It’s hard to believe, but the college baseball season is back.

The last time we saw live action between a pair of teams, the Virginia Cavaliers were the last team standing in Omaha last summer with the program earning its first national title.

Will the Cavaliers, despite having some gaping holes to fill, repeat as national champs? Or, will a team like Florida finally get over the hump and, too, win its first national title in 2016? We’ll find out all the answers to those questions in the coming months, but in the meantime, it’s never too early to take a gander at how we, as a staff, feel the postseason picture should look come Selection Monday.

To no surprise, Florida is the top national seed after also earning a No. 1 ranking in our top 25. The Gators are joined in the top eight by fellow Southeastern Conference stalwarts Vanderbilt and Texas A&M, while the league as a whole garnered an impressive five regional hosts and 10 overall bids to the postseason, with other teams including LSU, Mississippi State, South Carolina, Arkansas, Kentucky, Ole Miss and Missouri.

The Atlantic Coast Conference is also well represented in the projections with Louisville having the No. 2 national seed, while the league as a whole has eight teams in the field, with Wake Forest narrowly missing the cut. Meanwhile, the Pac-12 has two national seeds with Oregon State and California leading the charge, while the league as a whole has six bids. The Big 12 is also projected to have a strong spring with five teams making the field, with Oklahoma State earning a national seed, while the American Athletic Conference and Big Ten Conference are expected to earn four bids to the postseason, with both leagues having other teams that could find their way into the mix – South Florida and UCF in the AAC, and Illinois, Nebraska, Michigan State and potentially Ohio State out of the Big Ten.

Wake Forest, Wichita State, College of Charleston, Southern Mississippi and Clemson were our last five teams out of the field, while Liberty, Stanford, South Alabama and San Diego were teams up for discussion.

The D1Baseball.com staff determines the weekly projections, with the next set coming sometime in mid-April.

* denotes automatic qualifier, () denotes national seed and super regional pairings are side-to-side with the host on the left-hand side.