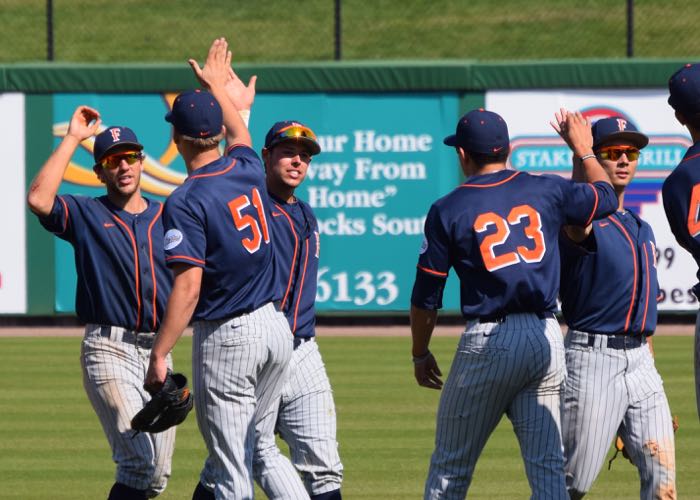 CLEARWATER, Fla. — Cal State Fullerton’s hitters struck out 27 times in losses to South Florida and Alabama State on Friday and Saturday, but coach Rick Vanderhook and the Titans kept an even keel and did not overreact. Their weekend concluded with a tough assignment against No. 11 Louisville on Sunday, making an 0-3 trip to Clearwater a distinct possibility. But Fullerton showed a dramatically improved offensive approach Sunday right out of the gate, jumping out to a 4-0 lead in the first inning against Josh Rogers en route to an 8-6 win.

The Fullerton dugout was energetic and loud from the first inning on, and the hitters were locked in and aggressive. Before the weekend began, Vanderhook planned out the three very different lineups he would use in the first three games, because preseason competitions had yet to solidify any roles. So Sunday, sophomore first baseman Josh Estill made his first start (in the cleanup spot), and Hudgins was back in the lineup for the second straight day (at DH, after catching Saturday) and hitting fifth. Another lesser-known Titan, Dustin Vaught, found himself in the starting lineup in left field (hitting seventh). 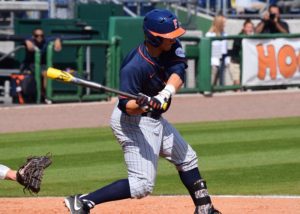 All three provided big hits in that big first inning. Estill put the Titans on the board with an RBI double to left field. The next batter, Hudgins, cranked a two-run single to left. Two batters later, Vaught drove him home with an RBI single to left-center. Fullerton jumped on first-pitch fastballs and tried to avoid chasing Rogers’ good slider.

Hudgins had two hits Saturday, including a double and a single that both went to right-center, showing off his all-fields hitting ability. He finished Sunday 1-for-3 with two walks and two runs. Afterward, he said the Titans were determined not to finish the weekend 0-3.

“Just motivation, man. We’ve got to come out here and show what Cal State Fullerton baseball is all about,” Hudgins said. “We’re Titans, we’ve been known to do that. That’s our baseball team.”

Freshman lefthander John Gavin was sharp in his first career start, holding Louisville to one run through the first five innings before the Cardinals got to him for three runs in the sixth. Tall, physical and athletic with an easy delivery, Gavin’s calling card is an 87-90 fastball with good sink and arm-side run, and he mixed in some 77-79 changeups. He threw his breaking ball just once, as that pitch remains a work in progress, but his fastball command and life are good enough that he can succeed this year with his fastball-changeup combination. 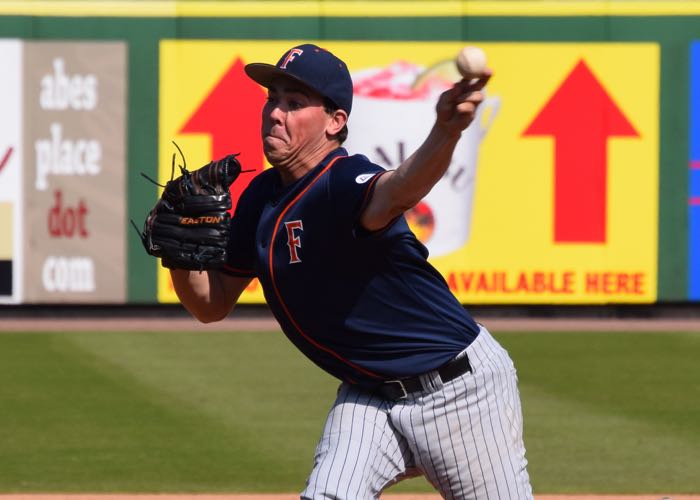 “He’s good. He’s good,” Vanderhook said. “He shut us out for five in the alumni game. That fastball’s sneaky. Guys don’t see it. You’re coming out, and your first start against somebody like that, you’re good.

One other note: Vanderhook said third-team preseason All-America righthander Justin Garza threw Saturday and “is ready to go.” He’s slated to start next Saturday against Stanford.

Fullerton is far from a finished product, but the Titans can pitch, and they have an elite defensive catcher in Kennedy, whom Vanderhook called “the best catcher in the country.” Jake Jefferies and shortstops Timmy Richards and Tristan Hildebrandt also made a number of standout plays, making this team very good defensively up the middle.

And maybe Hudgins and Estill will prove to be crucial pieces for the offense, which responded in very encouraging fashion when the Titans had their backs to the wall Sunday against a very good opponent.

OTHER NOTES FROM CLEARWATER

• Even down 8-1 heading into the sixth inning, Louisville did not roll over. The Cardinals made Fullerton sweat a little bit with three runs in the sixth and two more in the seventh. Sophomore outfielder Corey Ray continued his big weekend with a towering leadoff homer in the sixth; he finished the day 2-for-4 with two RBIs. For my money, he was the best player on the field in Clearwater. He’s so fluid in all facets of his game, and he has easy lefthanded power. I spent regional weekend last year in Louisville, where it seemed like Ray was emerging as a star before our eyes.

“He picked right up where he left off,” Cardinals coach Dan McDonnell said of Ray on Saturday. “We challenged Corey: ‘You’ve got a chance to be a super player, and we need you to.’ That was the realization last year, playing five freshmen, knowing that they were going to grow up quick, and we’re going to need them to contribute.

“(His swing has) good balance. He worked hard to hit the ball hard the other way and stay on the ball. You just watch his BP, and you feel really good that he’s doing what we need him to do to become a middle-of-the-lineup hitter, because you’re going to see so much. You’re going to see their best. They’re going to pitch around you, you’re going to see breaking balls in fastball counts, and he’s had a lot of good swings so far.” 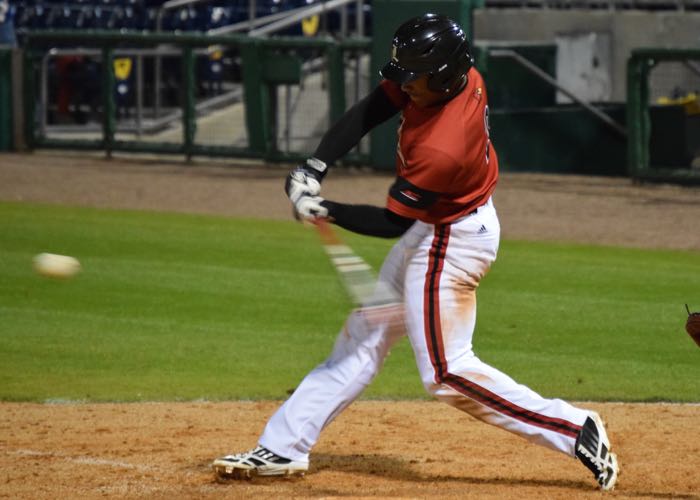 • Heralded freshman two-way talent Brendan McKay made his pitching debut Sunday for Louisville and did not disappoint. The lefthander worked in the 88-91 range and touched 92 with his fastball, but he really opened the eyes of a handful of scouts behind the plate with his power curveball, a sharp downer pitch with tight rotation that ranged from 75-81 mph. He’s going to be a real star for the Cardinals.

• Alabama State got shellacked 12-4 by South Florida on Sunday, but I still came away impressed with the Hornets, who went 1-2 in Clearwater. As I wrote Saturday, ASU’s senior core is very good, and that team will be the class of the SWAC and a dangerous regional opponent if it can make the NCAA tournament. T.J. Renda and Joseph Camacho give Alabama State two savvy weekend starters atop the rotation, while Jorge Pantoja and Armando Ruiz give the bullpen two legit power arms that any SEC or ACC team would love to have. And my man Einar Muniz, the 5-foot-5 dynamo, continued to wreak havoc on Sunday, going 2-for-3 with a double over the right-fielder’s head. Cleanup man Waldyvan Estrada, a physical presence with a good track record of hitting, delivered a two-run double in the fourth inning that helped Alabama State cut its early four-run deficit to one (4-3), but South Florida broke the game open against the Hornet bullpen late.

• South Florida had a great weekend, going 2-1 with wins against Fullerton and Alabama State. I still don’t think this team has the pitching to make a regional, because the staff is very ordinary after ace Jimmy Herget. But the Bulls do have some physicality in the middle of the lineup, led by brothers Luke and Levi Borders, who both hit some balls hard this weekend. Luke Borders capped USF’s four-run first inning Sunday with a three-run double. Leadoff man Kevin Merrell also has a chance to have a nice year, because he has a good swing and approach. He went 3-for-5 with three runs and an RBI on Sunday.