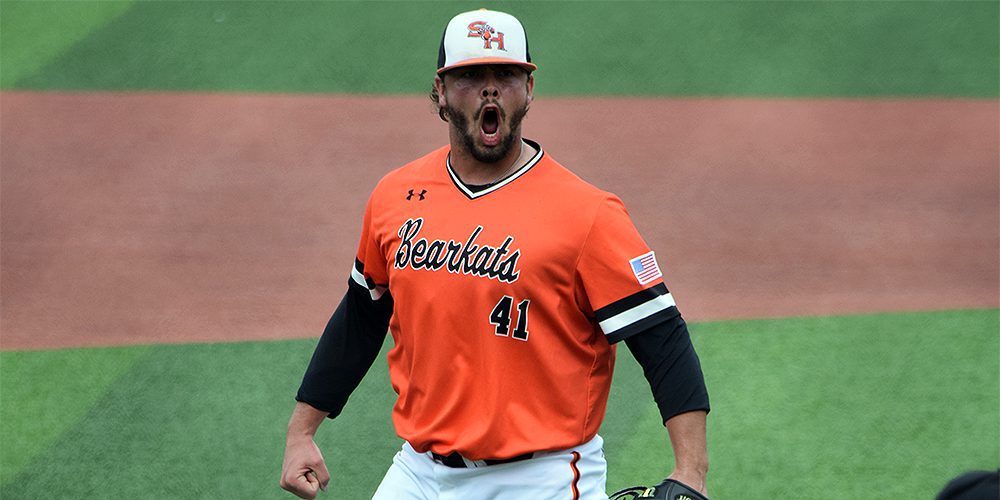 HUNTSVILLE, Texas — When you think of non-power conference teams who have made a significant impact on the sport over the past few seasons, Dallas Baptist and Sam Houston State immediately come to mind. So, it’s no surprise the two Lone Star State programs got into a Texas-sized tussle Saturday afternoon with both teams dealing some big-time blows.

Dallas Baptist dealt the first big blow of the series Friday night. The Patriots jumped out to a 6-0 lead after three innings in the series opener, and it was a shock to the Bearkats. They hadn’t been punched in the mouth quite like that so far this season.

Matt Deggs’ Bearkats adjusted. Though zeroes filled up the scoreboard through the fifth inning, they scored four runs in the sixth and seventh innings combined and two more in the ninth to send the game into extra innings. There, DBU’s Devlin Granberg hit a two-run single to give the Patriots the lead and win. The first knockout punch fo this series was delivered.

Deggs liked the way his team fought back in the opener, but on this day, he wanted his Bearkats to be the aggressor and the one that dealt the knockout punch.

He didn’t go home disappointed, as the No. 25 Bearkats got a two-run home run from Clayton Harp in the eighth inning to take a 6-5 lead and get the win over the Patriots with Dakota Mills closing out the ninth inning.

Two games decided by a total of three runs. It’s hard to beat that.

“Those guys are really tough to handle. They can really pitch it and they can obviously swing it pretty good. Everyone can see that, and we’re not playing real pretty right now,” Deggs said. “Last night early on was the first time we’ve gone down like that all-season long, and that gave us a chance to respond. We started throwing punches ourselves and both teams have come back with punches since. To me, this series has had a regional or super regional feel to it.

“The thing about these kids is they have a lot of heart and they keep finding a way to get it done” he continued. “I equate it to landing an airplane. I don’t care how you land it as long as you land it and we all walk off of it. It was a good day today. We walked off that airplane.”