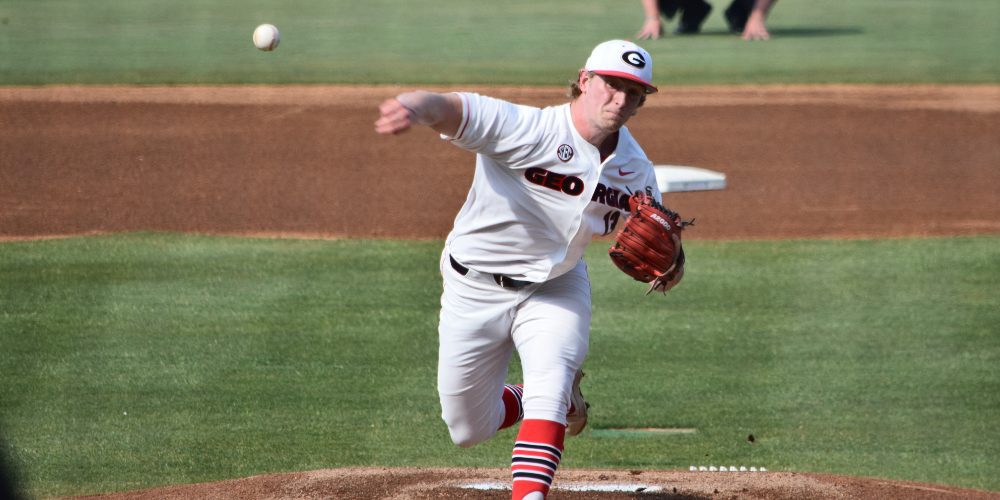 HOOVER, Ala. — It’ll be a surprise if Cole Wilcox doesn’t have a memorable career in a Georgia uniform.

Wilcox was one of the premier high school prospects just a summer ago, and he had an opportunity to get a couple of million dollars playing professional baseball. But he wanted the college experience and he wanted a chance to do big things for the Bulldogs.

The strapping 6-foot-5, 235-pounder, announced his presence in a big way at home against Florida a few weeks ago. In that game against the Gators, he struck out seven, walked one and allowed just a run and two hits in seven innings.

Sure, that was impressive. But color me even more impressed with his performance Thursday afternoon, as he helped guide Georgia to a 3-1 win over hard-hitting Arkansas, striking out five and allowing just one run and three hits in 6.1 innings.

“His coming out party was against Florida. He threw a seven-inning complete game against UF,” Georgia coach Scott Stricklin said. “That was as good of pitching as I’ve seen all year, and he just continues to get better and better.”

Contrary to what might be popular belief, Wilcox hasn’t had an easy road in his young career. Many observers would think a pitcher who possesses a power arm like his would show up to campus and mow down anyone who stepped into the batter’s box. But that didn’t happen. The opposite actually occurred.

Wilcox had a tough fall for the Bulldogs. Yes, he showed a big arm that oozed potential. But the Bulldogs have several veteran hitters and he was hit hard at times. He also got touched up early this spring before showing steady improvement.

The talented righty didn’t get discouraged and certainly didn’t lose confidence. What brought him down in the fall and early this spring has only served as a learning experience and motivational tool.

“It’s been a little unfair when a guy like that shows up to campus. I think everyone expects him to strike everyone out and it’s smooth sailing because he’s that talented,” Stricklin said. “But he got hit in the fall, and they hit him pretty good. He also got hit early this season, but this is a testament to Cole Wilcox and what type of kid he is.

“He didn’t get down. He got upset and ticked off,” he continued. “With that fastball, the slider and changeup, he’s really tough to hit. It’s really a credit to Cole [how the situation was handled]. He looked at it as a positive thing in the long run, to you know, have some failure. Sure, he’s walked some people, but he’s getting better and better.”

Wilcox has spent much of the season showing glimpses of being an incredible pitcher to go along with being a guy with a premium, powerful arm. Wilcox entered the SEC tournament with an ERA just north of four, along with 58 strikeouts and 29 walks. He’s also been lighting up the radar gun, hitting 99-100 mph with his fastball at times earlier this season.

The righty didn’t show triple digits against Arkansas on Thursday, but the potential seemed unlimited.