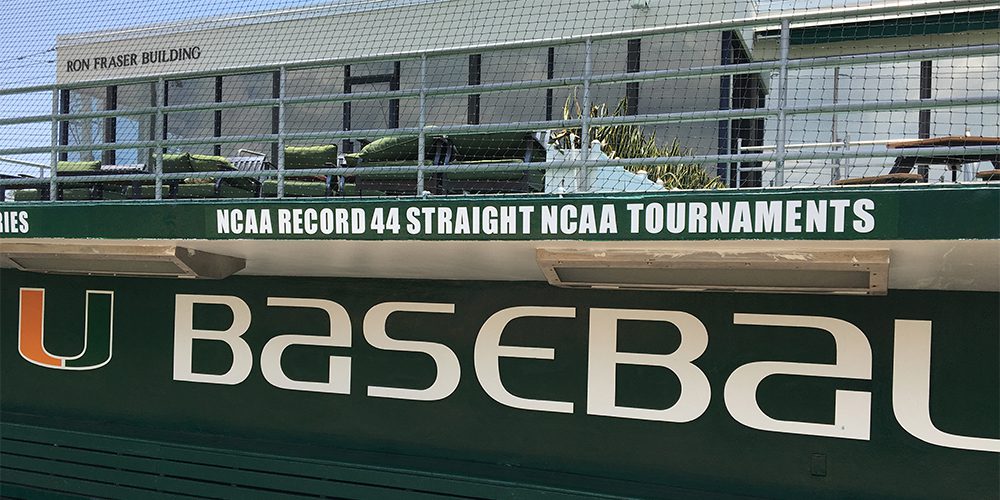 Overcome by emotion and buried under the weight of more than four decades of past accomplishments at his beloved University of Miami, Ruiz did the best he could to keep tears from running down the sides of his face.

Ruiz, the Hurricanes’ senior shortstop and team captain, grew up not far from this campus.

He knows all about the history of the four-time national championship baseball program that until Monday at about 12:30 p.m. had included an active streak of 44 straight consecutive berths in NCAA regionals, the longest playoff run in U.S. sports.

Now that’s over, and the pain of that reality was etched on Ruiz’s face.

“Nobody said a word,” Ruiz said when asked what the players said to each other once the media cleared out of the clubhouse.

Ruiz then had to pause several times to finish his comments.

Miami’s plight wasn’t made easier by the disclosure that they were the first school out – in essence, they were team No. 65 in a field of 64.

The Hurricanes (31-27) struggled almost all season, especially offensively, until catching fire at the end, winning six of their final seven games. 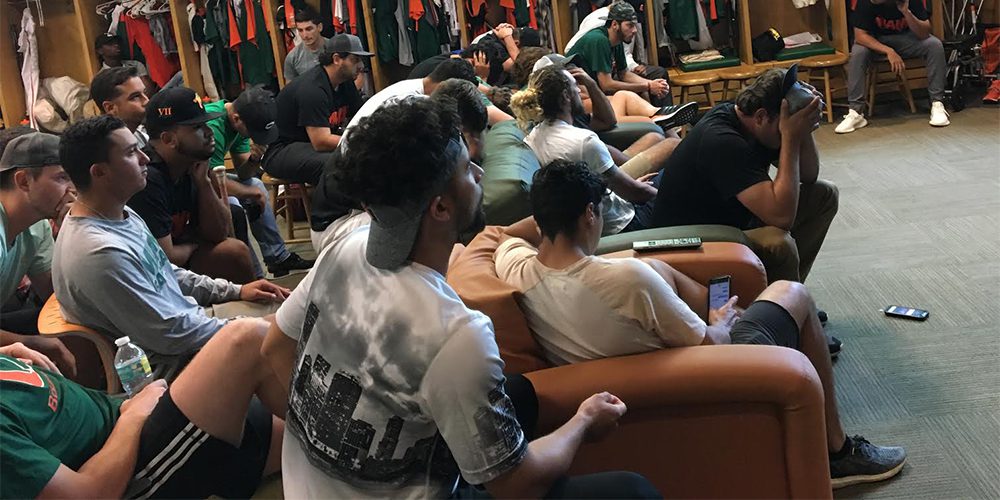 Monday was painful day for the tradition-rich Hurricanes. (Walter Villa)

In fact, over an 11-day span, the Hurricanes won six in a row and then – on that 12th day – they led North Carolina, which had the No. 2 RPI in the nation, by a 3-0 score early in an ACC semifinal game.

But then the rain came, in the fourth inning on Saturday, knocking out Miami’s starting pitcher, and the bullpen couldn’t hold the advantage.

Miami’s magic had run out.

The Hurricanes’ loss to the Tar Heels wasn’t the only bad news for Miami this weekend.

Teams such as Xavier and Rice closed the deal on Miami by winning postseason tournaments – Big East and Conference USA, respectively – that were those schools’ only ticket to a regional. Had either Xavier or Rice lost, Miami would’ve extended its streak to 45.

“Yesterday was a tough day for us,” Hurricanes first baseman Chris Barr acknowledged. “We were all watching. We saw there were upsets.

Unfortunately for the Canes, it was “out”, and Miami coach Jim Morris took the news just as hard as his players.

But Morris, who had previously announced that he will retire after the 2018 season, chose in his opening comments on Monday to pay homage to the greatness of the streak … as opposed to dwelling on the fact that it ended.

In the final analysis, Morris put 23 years into the streak, Fraser put in 20 and Brad Kelley had one.

The streak might still be alive if not for some disappointing early-season results.

Miami lost two of three to Dartmouth, which finished its season 22-17-1 and played mediocre competition compared to Miami’s ACC schedule. Dartmouth, inexplicably, shut out Miami twice in that early-March series, 1-0 and 5-0, and that is when the fire alarms, figuratively speaking, started to go off in Coral Gables.

The Canes this year resurrected their series with FIU and lived to regret it, losing three of four to the Panthers. Fresh off the 5-0 loss to Dartmouth, Miami lost 12-1 to FIU. The next night, at FIU, the Canes lost on a walk-off sacrifice fly in which the Panthers player scored from second base.

Another important date was April 23. Miami and Florida State had split the first two games of a series in Coral Gables. The third game was cancelled due to bad weather – a lost opportunity for Miami.

“All those games will haunt us,” Miami pitcher Jeb Bargfeldt said. “It’s going to be tough to swallow when you start to look back at the individual games. The whole season is haunting.”

Injuries also played a role in Miami’s demise. Freshman catcher Michael Amditis, known for his great defense, got off to a hot start with the bat on a team starved for offense. He hit .357 in six games before being lost for the season.

Barr, Ruiz and center fielder Carl Chester played most of the season but were all slowed by injuries, especially early.

Set-up reliever Cooper Hammond missed most of the year before pitching late in the year, getting into five games.

On the pitching side, Danny Garcia was a big loss, and losing save monster Bryan Garcia (1.89 ERA, 18 saves) hurt just as bad as anything else.

Finally, there were some Canes players who didn’t deliver up to expectations. Jesse Lepore went from 9-0 and a 2.20 ERA as a midweek starter last year to 1-6, 4.83 this season.

Outfielder Hunter Tackett, who put up big numbers in junior-college last year, struggled to a .658 OPS and was benched for a long stretch.

And Edgar Michelangeli (.642 OPS), who came up with clutch hits at times, was not consistent enough.

Even with all that went wrong, however, enough went right over the past two weeks to give Miami a chance.

But as the names of at-large team were read off on Monday afternoon, the situation grew more and more desperate for Miami.

“Twitter was 20 seconds or so ahead of the TV,” Barr said. “We all saw what was happening (at the end).

“We knew we wouldn’t get into Wake Forest’s regional because they are an ACC opponent. We were just waiting for Gainesville (Florida Gators), which of course was the last one.

“Once we didn’t get in there, pffff, my heart dropped. I’ve never felt that before. Coming into today was the most nervous I’ve ever felt – more nervous than in any game … not a good feeling.”

Ruiz said he was surprised not to hear Miami’s name called.

“We’re disappointed – I didn’t think this was going to happen,” he said. “I thought we were in after beating Wake Forest (to reach the ACC semifinals).

“I’m a little shocked. But I’m proud of the way we played. We gave it all we had. There’s nothing to be ashamed about – I love all the guys in there.”

Bargfeldt, who joined the team this year as a junior college transfer and was Miami’s most consistent player, earning second-team All-ACC honors, said that means little to him.

“My whole reason for coming here was to partake in postseason play, go to Omaha and be a part of the Miami tradition,” said Bargfeldt, who went 7-3 with a 2.28 ERA.  “I’d rather have had a terrible year and gone to Omaha.”

Although Bargfeldt didn’t grow up in Miami, he comprehends the championship legacy of the program.

“Just disbelief and hurt – you feel for the seniors and the fans and everyone who has contributed to this history,” he said. “It hurts in a part of your body that you didn’t even know you had.