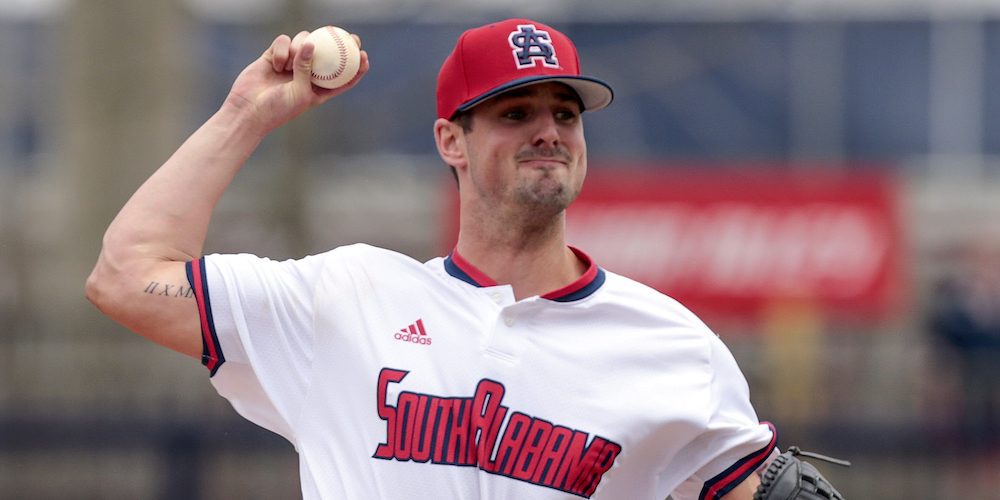 MOBILE, Ala. — South Alabama missed out on the postseason last year despite some lofty preseason expectations. This misfire happened in large part due to a lack of pitching production, primarily because a rash of injuries decimated the staff depth. Many of those arms are back and healthy now and coupled with some newcomers and the maturation of the returning letterman, South Alabama has the look of a team to be reckoned with.

The Jaguars had a great weekend with a sweep of 2018 Super Regional participant Tennessee Tech at Stanky Field this past weekend taking the three game set by a combined 25-6 margin. The starting pitching stood out.

Drake Nightengale emerged as the South Alabama ace. The 6-foot-1, 195-pound, junior righthander from Hattiesburg, Miss., mixes four pitches well. His fastball hovers around 88-91 while also featuring two breaking balls and a plus change. Nightengale (1-0) worked five scoreless innings in his start and allowed just four hits. He struck out nine and walked a pair. He pitched out of bases loaded jams in the first and fourth, with the latter coming courtesy of three consecutive strikeouts after the Eagles packed the base paths. He left after five innings and just under ninety pitches.

“Drake Nightengale is a Tommy John survivor so I take all those things into account,” said South Alabama head coach Mark Calvi.  “He had that emotional inning in the fourth, that pitch-wise it was an inning and half worth, but energy-wise it was more like two, just with the emotion of it all.”

Through his starts against Clemson and Tennessee Tech, Nightengale now has worked 9.1 innings and allowed only five hits, one run, with 15 strikeouts and six walks.

The strong starting effort continued in the series second game as sophomore RHP JoJo Booker showed swing-and-miss stuff collecting ten punch outs in his 4.1 inning start. He left after 83 pitches, but just 44 of them strikes in the five-walk effort.

“JoJo has been working out of the stretch,” said Calvi. “He is 90-to-93 out of the stretch with a 94 mixed in. He has been up to 95. He has gotten much better command. He has shown more poise. He is better and he knows he is better. He can throw more strikes. For him, last year was deflating. He worked extremely hard but he wasn’t getting the results. We made some small tweaks mechanically to get him on time and he is starting to take off. His best days are ahead of him. Credit him, when you walk five you are not supposed to get away with it, but he made some pitches. Just like last week when he had his back against the wall against a very good Clemson team and he made pitches.”

Sunday starter Caleb Yarborough has also been solid. Against Tennessee Tech he threw four innings of two-hit, shutout ball. Nightengale, English and Yarborough have combined to provide a quality starting rotation early on as the Jags have the look of a regional contender.

“I have been pleased with the starting pitching,” said Calvi. “They were good in the preseason, they were good in the fall. You have some quality new guys like Nightengale, and some returners like JoJo who have the ability. If he cuts down a few of those free passes. He has put in the work. You can see him getting better. The guys who were hurt last year like Yarborough and (Andy) Arguelles. They have been a big shot in the arm. I’m proud of how we pitch and play defense. You play Clemson last week and now Tennessee Tech, we are getting a test and learning about our club.” 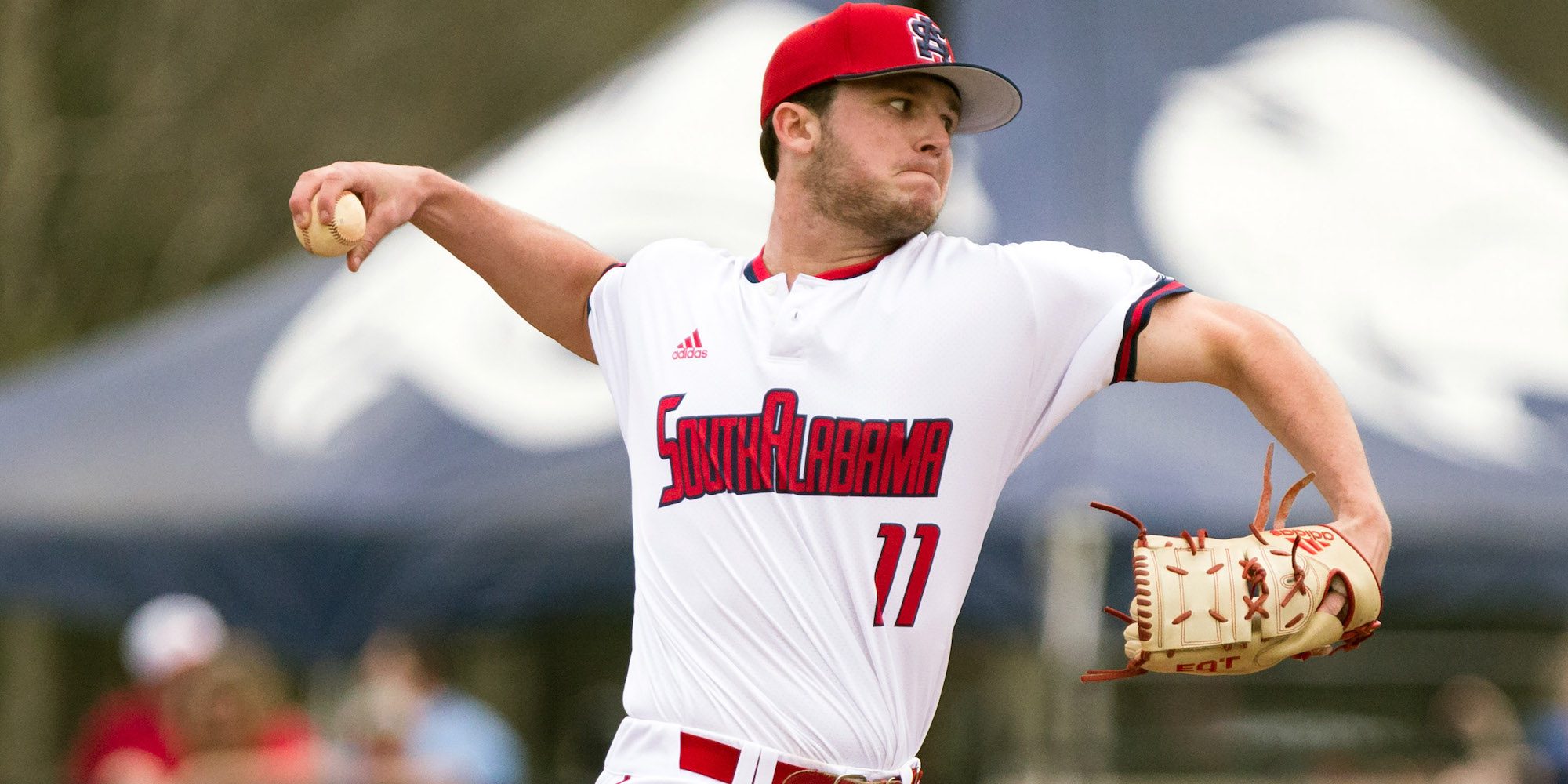 The difficult schedule continues after the Clemson and Tennessee Tech series with a midweek contest at LSU February 26 before Alabama visits for three games this coming weekend. So why would Calvi schedule games against Clemson (47 wins), Tennessee Tech (53 wins) and LSU (39 wins) followed by a visit from an in-state SEC school among their first 10 games?

“To me it is multi-purpose,” said the eight-year Jaguar coach. “You have to play good teams to learn about your own team. I usually give myself about 25 games to figure out what we have before we start our challenging conference schedule. Then it is about the optics of it, putting your team in position to get in the postseason.”

The pitching isn’t the only item Calvi is pleased with through the first two weekends. Though the Jaguars are batting only .246 as a team, freshman outfielder Ethan Wilson is hitting .565 with 13 of the team’s 48 hits. Of those 13 hits, Wilson has a pair of doubles, a triple and a home run. The first-year player from Andalusia, Alabama has shown huge upside. At 6-foot-2 and 205 pounds, Wilson is an impressive specimen who should only continue to develop.

“Ethan was one of those three-sport athletes, football, basketball, baseball. He was doing 7-on-7 (football) up to his junior summer. He is from Andalusia High, a big-time quarterback who helped his team win the (4A) state title last year. He is an athlete. He was not out there at showcases and the big summer events because he was multi-sporting it. He has fallen right into the place where some of the guys we have gotten who played multiple sports like Jordan Patterson who went in the fourth round and was a big leaguer. We have had success with those guys. Ethan has really good makeup and work ethic. The sky is the limit with him. Nothing has been too big for him. He will get punched in the mouth like everyone will, but that kid, he doesn’t take a day off, a practice off, a play off. He is always going hard thinking baseball. I think his best days are ahead of him.”

If Wilson and those starting pitchers continue to develop, those best days ahead could have the Jaguars back in the postseason this June.