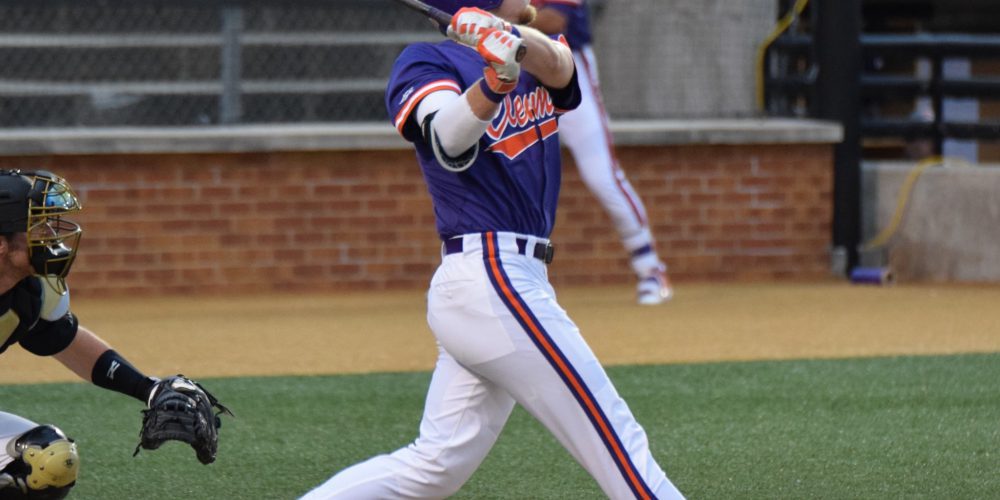 Team of the Day: Rice

The Owls are on a serious roll. After opening the season with back-to-back losing weekends, Rice has won five straight weekend series, highlighted by a set against East Carolina and a sweep of Old Dominion. On Tuesday, the Owls knocked off No. 6 Texas A&M 4-3, giving them nine wins in their last 10 games — a stretch that includes other quality midweek wins against Houston and Sam Houston State.

Dane Myers led the Rice offense with two hits and two runs Tuesday, and his triple sparked a three-run rally in the fourth inning that proved decisive. The Owls also got two RBIs from Hunter Kopysinski in the No. 9 hole, and righties Willy Amador (4.1 IP, 1 ER) and Glenn Otto (4.2 IP, 2 R, 0 ER) held the potent A&M offense at bay. Otto ended the game with a strikeout to strand the tying run on base. The rivalry showdown drew 5,478 fans, the second-largest crowd ever for a Rice game at Reckling Park.

Player of the Day: Evan Guillory

Guillory, a sophomore righthander, was sublime in Louisiana-Lafayette’s 4-0 win against Northwestern State. After allowing a one-out single in the first inning, Guillory shut down the Demons the rest of the way, finishing with a one-hit shutout. He issued just one walk and struck out six in his 93-pitch masterpiece, and he retired the final 15 batters of the game in order.

“Evan was really in control of his pitches, moving them in and out, up and down and commanding all three pitches,” ULL coach Tony Robichaux said.

Since losing a series to Arkansas-Little Rock and a midweek game against LSU, the Cajuns have won seven of their last eight, and Tuesday’s game was a nice RPI win against a Northwestern State club that ranked 38th entering the day. The Cajuns are knocking on the door to returning to the Top 25.

The Aztecs have been one of the season’s biggest disappointments in the first half, carrying a 6-19 record into Tuesday’s game against No. 20 Long Beach. After the two teams traded three-spots in the fifth, the score remained knotted at 5-5 until the 12th inning, when SDSU won on a walk-off single by Andrew Brown. The Aztecs also got three RBIs from Chase Calabuig and three hits from Spencer Thornton. For Long Beach, it’s not a good loss to a team that had lost nine of its previous 11 and ranks just 210th in the RPI.

• No. 25 Michigan also lost its first game after entering the rankings, 9-5 at Notre Dame. Michael Hearne (7 IP, 3 H, 1 ER) turned in a strong start for the Irish, who have quietly won eight of their last nine.

• Struggling Kansas State knocked off surging Nebraska 4-2 in Lincoln. That’s a bad loss for the Huskers, as K-State had lost 11 of its previous 13 games, including three-game sweeps at the hands of Western Carolina, Oklahoma State and Texas Tech.

• No. 9 Florida State throttled No. 22 Texas Tech 10-1 in the first game of an intriguing two-game midweek set that was scheduled after both teams lost some early games to weather. In typical FSU fashion, the Seminoles drew 10 walks and supplemented them with nine hits, led by two apiece from John Sansone and Cal Raleigh. Six FSU pitchers limited Texas Tech to four hits. 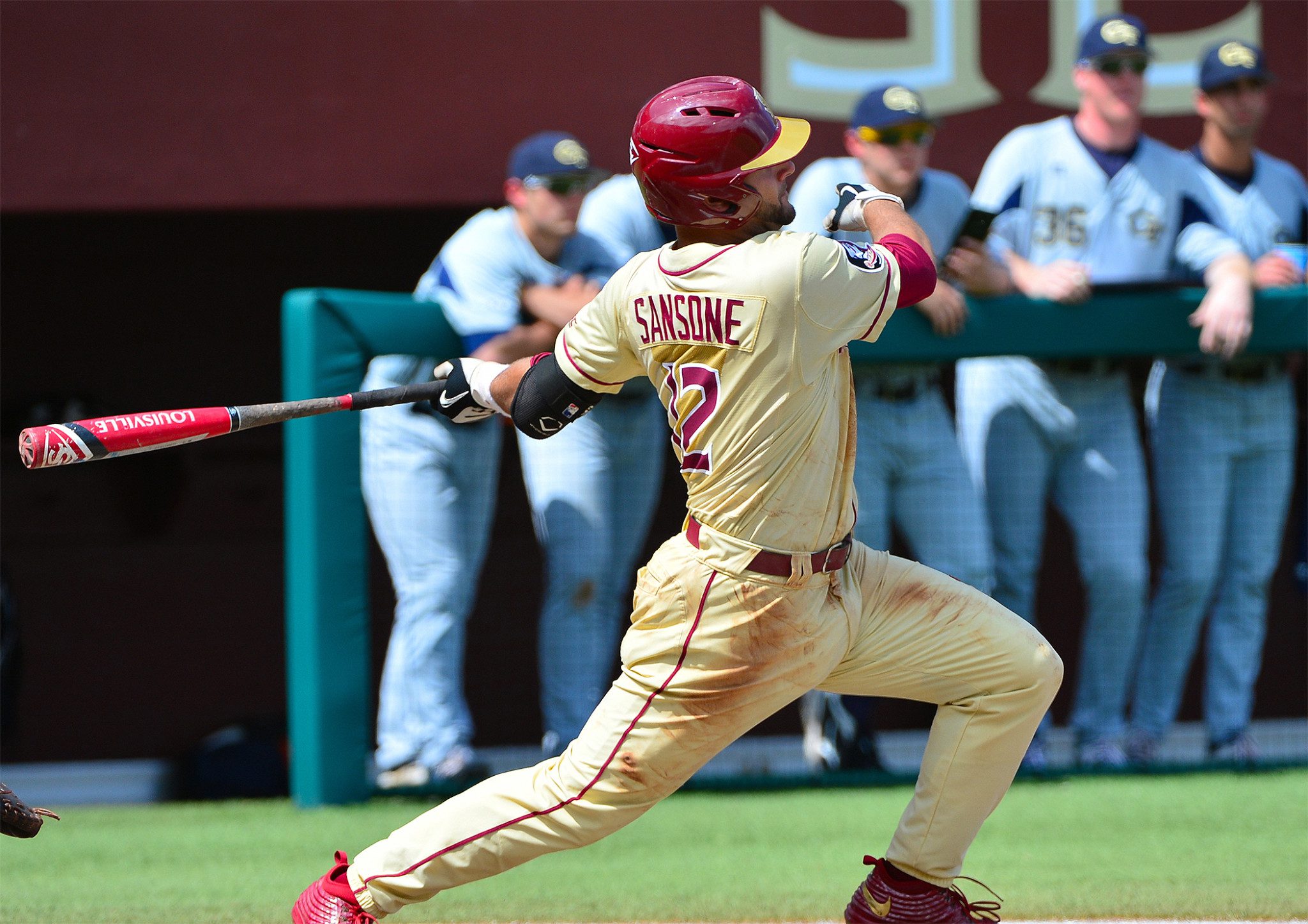 • One of the more notable developments in college baseball Tuesday happened in Nashville, where lefthander John Kilichowski made his long-awaited season debut for Vanderbilt in a 4-3 win against Lipscomb. Kilichowski struck out one and walked one in a scoreless inning of relief, and freshman Patrick Raby (3 IP, 1 H, 0 R, 0 BB, 5 K) was outstanding in a predetermined three-inning start to improve to 4-0 on the season. But the big story was Kilichowski’s return from the mysterious arm ailment that had sidelined him for the first seven weeks; he has the talent and experience to make a major impact for the Commodores down the stretch, perhaps eventually in the rotation.

• No. 3 Miami kept on chugging along with a 4-0 win against Florida Gulf Coast, extending the Hurricanes’ winning streak to eight games (including sweeps of Clemson and North Carolina). Brandon Lopez (3-for-4, 2 RBI) led the Miami offense in support of Jesse Lepore (7 IP, 2 H, 0 R, 1 BB, 7 K), who improved to 4-0.

• No. 8 South Carolina bounced back from a series loss at Vanderbilt with a 4-2 win over surging Coastal Carolina in Columbia. Dom Thompson-Williams (2-for-4, RBI) led the South Carolina offense in support of Taylor Widener (5 IP, 2 H, 2 R, 1 ER, 1 BB, 5 K), who picked up his first win of the year. The South Carolina bullpen followed with four innings of shutout relief, led by closer Josh Reagan, who pitched two hitless innings a day after passing a kidney stone (and with one more that still needed to be passed). Coastal, meanwhile, has squandered some opportunities to make some noise in midweek action, going 0-3 so far against top-10 RPI in-state foes College of Charleston and South Carolina.

• Stanford came from behind with three runs in the ninth to win a nonconference road game against rival California, 8-6. Matt Winaker sparked the ninth-inning rally with a leadoff double, and Johnny Locher capped it with a tie-breaking two-run homer. Quinn Brodey had three hits and two RBIs to lead the offense for Stanford, which improved to 15-8 on the season. The Cardinal is quietly building a nice at-large resume.

• In another nice in-state showdown, No. 18 Ole Miss earned a much-needed 6-2 win against Southern Miss in Pearl, Miss. The Rebels have lost back-to-back weekend series against South Carolina and Mississippi State, but they snapped their five-game losing streak Sunday against the Bulldogs, then followed it up with a win against a top-15 RPI opponent Tuesday. Ryan Olenek (3-for-4, R, 2 RBI) led the Ole Miss offense in support of James McArthur (6 IP, 4 H, 0 R, 2 BB, 5 K).

• Stop me if you’ve heard this one before: Seth Beer homered for Clemson, which beat Georgia 11-6 in Athens. Beer’s 13th long ball of the year (one behind national leader Heath Quinn) easily cleared Georgia’s scoreboard; the freshman sensation went 2-for-3 with three RBIs to lead Clemson’s 11-hit attack. On the mound, power lefty Alex Bostic made his first start of the year for Clemson, allowing five walks in 1.2 innings of work (he’s spent the first half of the year at the back of Clemson’s bullpen).

• No. 17 Florida Atlantic got a strong start from David McKay (6 IP, 2 H, 0 R) and excellent work from three relievers to beat UCF 5-0 in 11 innings. The game remained scoreless until the top of the 11th, when the Owls erupted for five runs. FAU improved to 22-4.

• Southeastern Louisiana won a nice intrastate showdown at Tulane, 7-6. Drew Avans went 4-for-5 and Brennan Breaud added three hits to lead the SLU offense in support of Pat Cashman (5 IP, 6 H, 2 ER). The Lions are building a very nice nonconference resume; they are now 2-0 in midweek games against Tulane, and they also split a two-game series against Southern Miss and beat South Alabama.