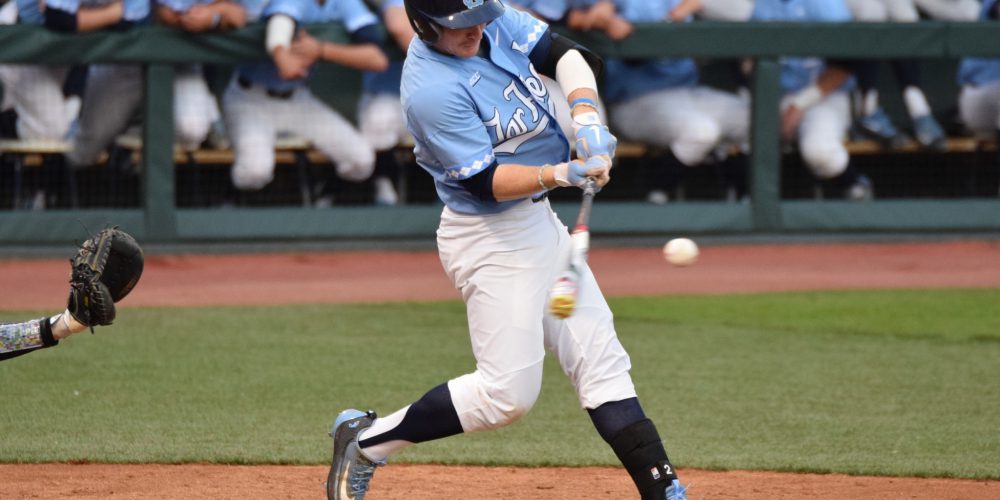 • No. 6 North Carolina followed up Tuesday’s 17-6 blowout of East Carolina with an 11-6 victory at home against Elon, improving the Tar Heels to 14-2 on the season. Aside from getting shut out Sunday against Pittsburgh, UNC has been on an offensive role of late, scoring in double figures in six of its last eight games. I was on hand for UNC’s win Wednesday, and the Tar Heels got quality at-bats up and down the lineup — this offense looks a whole lot more potent than last year’s bunch. The top two hitters in the UNC order set the tone Wednesday, as leadoff man Brian Miller reached safely in each of his first four plate appearances, and No. 2 hitter Adam Pate went 3-for-5 with three RBIs and a double.

I was eager to see what Elon outfielder Kyle Jackson could do at UNC — he entered the contest batting a ridiculous .441/.566/.966 with eight homers and 22 RBIs. After North Carolina built a 9-2 lead through five innings, the Phoenix pushed across four runs in the sixth inning on four walks and three singles, and Jackson came to the plate with the bases loaded and one out, representing the go-ahead run. But after working the count full, Jackson struck out on a 93 mph fastball from Spencer Trayner, who then fanned Danny Lynch to strand the bases loaded and end the threat. UNC’s bullpen depth looks like a real asset, as expected; on Wednesday, Brett Daniels turned in 2.2 scoreless innings, and freshman Taylor Sugg worked three hitless frames with five strikeouts to end the game. Both righties bumped the low 90s and showed some feel for their breaking balls.

• Having a dominant midweek starter is a nice luxury that few teams enjoy. But Louisville is one of the lucky few. Sophomore righthander Kade McClure worked five innings of one-run ball in Wednesday’s 9-1 win against Wright State, improving him to 4-0, 0.86 on the season. He now has 17 strikeouts and just three walks in 21 innings. Sophomore shortstop Devin Hairston had three hits to lead the offense. Hairston was known as a defensive whiz entering the spring, but his bat has taken a big step forward — he’s now batting .403 in 62 at-bats.

• Antoine Duplantis has played in all 16 of LSU’s games this year — and he has recorded a hit in all 16 games, too. The freshman No. 3 hole hitter went 3-for-3 with two runs and two RBIs Wednesday to lead the Tigers to a 9-4 win against New Orleans. The Tigers improved to 13-3.

• Ole Miss extended its winning streak to 12 games with a 5-1 win against UAB. For the second straight day, the Rebels got a strong start from a freshman on the mound, as James McArthur allowed just one run on five hits to pick up his second win in as many starts. The disciplined Rebels drew six walks in their five-run fifth inning to break the game open. The Ole Miss bullpen continued to sparkle; it has allowed just one earned run in the past 10 games, spanning 35 innings.

• I wrote in Tuesday’s GSA Spotlight that Matt Thaiss has become one of college baseball’s best players. The Virginia catcher backed up that praise with a big game in Wednesday’s 10-8 win against Towson. Thaiss went 3-for-5 with a pair of two-run homers, and Daniel Pinero added three hits to help lead UVa.’s 12-hit attack. Thaiss is now hitting .380/.476/.620 with four homers, 17 RBIs, five doubles and an absurd 12-1 walk-strikeout mark in 18 games. 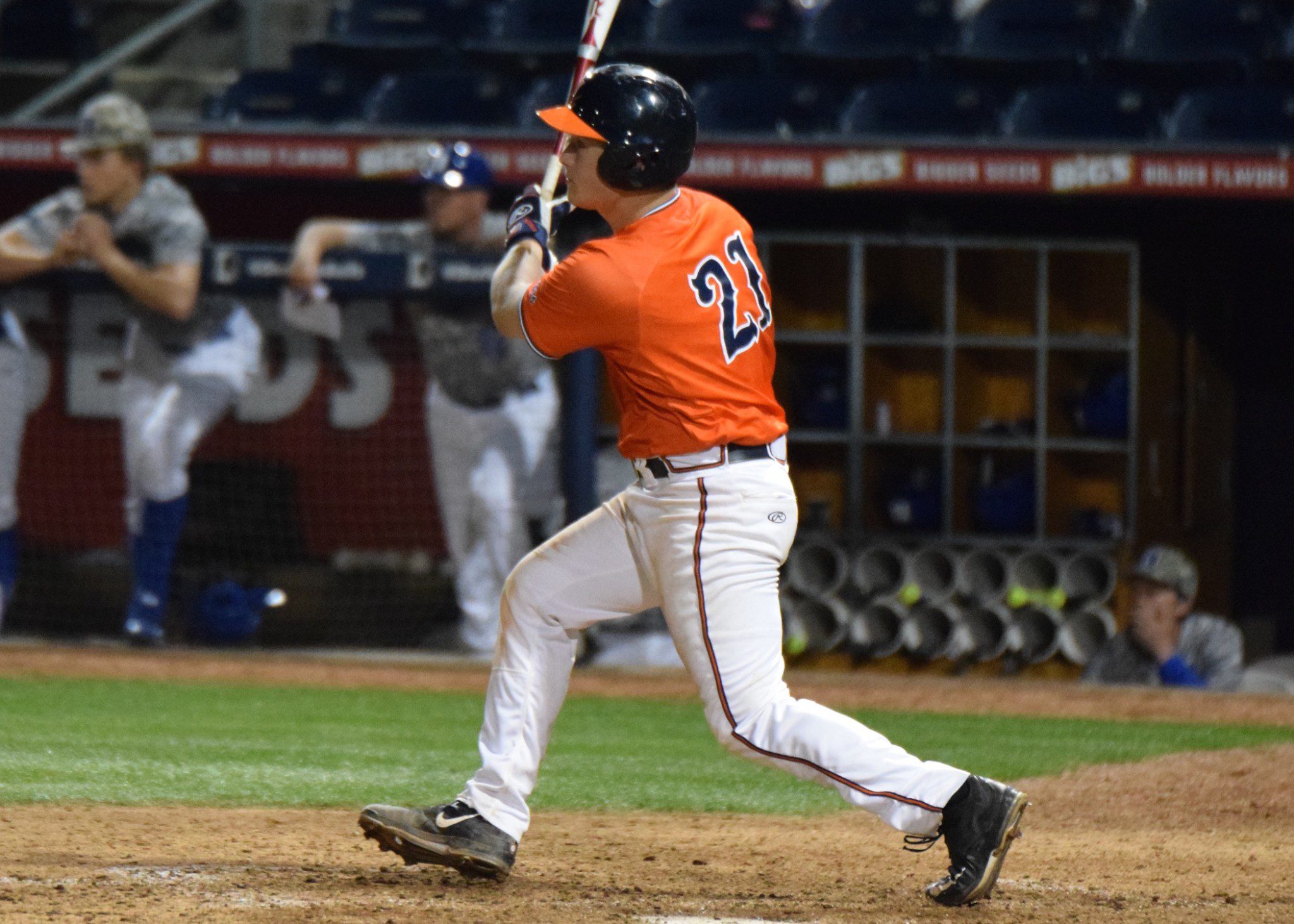 • Speedy leadoff man Carl Chester and slugging catcher Zack Collins have carried Miami in the first quarter of the season, and they continued to do so in Wednesday’s 5-2 win at UCF. Chester went 3-for-5 with two runs scored, while Collins went 2-for-3 with a run and an RBI. Jesse Lepore (5 IP, 2 ER) was solid in a no-decision, and Miami got four combined shutout innings from relievers Andrew Cabezas, Frankie Bartow and Bryan Garcia. That trio figures to carry much of the bullpen load for Miami with Cooper Hammond out another month-plus.

• Big Ten favorite Maryland continued to scuffle, dropping a 9-5 contest at UC Irvine. The Terrapins fell to 7-9 on the season, while the Anteaters have stealthily gotten off to an 11-6 start. Irvine cranked out 13 hits Wednesday, led by leadoff man Cole Kreuter (3-for-5, 2 RBI), one of five ‘Eaters with multi-hit games.

• Coastal Carolina won a big midweek game against UNC Wilmington, 6-4. The Chanticleers mustered just three hits but took advantage of nine walks from the UNCW staff and three errors from the UNCW defense. Andrew Beckwith worked 3.1 hitless innings of relief to close out the game for the Chants, who improved to 11-7. Coastal had an uneven first month, but it has now won four straight, including a pair of nice wins against Illinois to end the weekend and a Tuesday win against 12-5 UNC Greensboro.

• No. 12 Mississippi State has fallen flat in two straight midweek games coming off a big series sweep of Oregon. The Bulldogs blew a big lead to Eastern Kentucky on Tuesday, then were silenced by Oral Roberts on Wednesday, 3-1. Cale Tims (5 IP, 4 H, 1 ER, 1 BB, 6 K) picked up his first win for the Golden Eagles, and Noah Cummings had two hits to lead the offense. ORU improved to 8-8. MSU now heads into its SEC-opening series at Vanderbilt on a sour note.

〈
Previous Article Sorenson: Off The Top Of My Head, March 18
Next Article Under The Radar: Brigham Young
〉