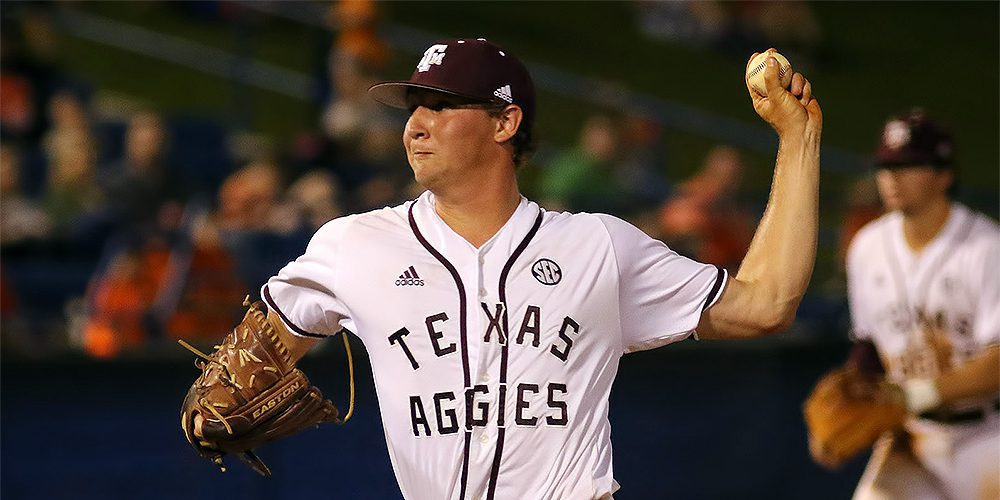 John Doxakis is red-hot for the Aggies.

HOOVER, Ala. — There’s little margin for error when you’re facing one of the nation’s premier arms and prospects in Auburn’s Casey Mize. So, when Texas A&M lefthander John Doxakis warmed up in the bullpen before the game, there might’ve been at least some concern.

As Doxakis went through his warmup pitches, he didn’t feel all that great. He didn’t think his stuff was ultra crisp, and against an Auburn lineup that put up nine runs on Ole Miss the day before, that seemed like a recipe for disaster.

Doxakis shook off the bullpen rust and put together his best performance of the season, carrying a no-hitter in the eighth inning against the Tigers, and doing the unthinkable in the process — he outdid Mize, whom many believe will soon be the top draft choice of the Detroit Tigers, in a 4-2 Aggies victory that sends them to the bracket championship of the SEC tournament.

“You know, I wasn’t really that amped up. I know he’s a great pitcher, but we started 0-0 at the beginning of the game, and it’s not about who’s the best pitcher out there, it’s about who was the best on that day and in this game,” Doxakis said. “I definitely didn’t feel great before the game. I wasn’t really 100 percent in my bullpens and I was talking to one of our coaches [Kyle Simonds] about it, because he knows what it’s like. He just said to go out there and throw and don’t even think about it. So, that’s pretty much what I did.”

Apparently that sage advice from Simonds worked, because Doxakis was electric against the Tigers, and he set the tone with a strong first inning. Auburn’s Will Holland popped out to begin the game, before Doxakis raised some eyebrows with a pair of strikeouts to end the frame. He punched out Steven Williams on a 93 mph fastball, his high water mark velocity-wise for the evening, while also striking out Brett Wright on an 82 mph slider.

That was the theme the rest of the evening for Doxakis and Auburn’s hitters. He went the rest of the way mystifying Auburn’s lineup. Doxakis threw well against the Tigers earlier this season. And while it was thought coming into the day that righthander Mitchell Kilkenny would start against AU, the Aggies liked Doxakis’ splits against AU’s lineup.

You saw the reason for that decision from the first inning on Thursday night.

“I feel like Dox [Doxakis] has been as hot as anyone on our pitching staff as of late,” Texas A&M coach Rob Childress said. “I thought he was really aggressive in the strike zone with all three of his pitches, and he knew he’d have to be at his absolute best against Casey Mize. He knew Mize wasn’t going to give us many opportunities, if any.

“I was just really proud of the way those two went at it,” Childress added about Doxakis and Mize. “If you were a baseball fan at this game tonight, you saw two pitchers going toe-to-toe with each other. I thought it was a great performance by both of those guys. I’m a pitching guy at heart, so it was a lot of fun to watch them tonight.”