Michael Baumann breaks down the Champaign Regional, where Illinois is a heavy favorite, but Notre Dame, Wright State and Ohio are frisky.

Most Exciting Player: Kevin Duchene, lhp, Illinois. Illinois’ Friday night man has pinpoint command with which he attacks both sides of the plate, plus a funky delivery and an on-mound demeanor to match.

Best Defensive Player: Will Krug, cf, Illinois. 80-grade speed and a huge arm—good enough to be the best defensive center fielder in a regional that includes Ohio’s Manny DeJesus, which is saying something.

Best Pitcher: Tyler Jay, lhp, Illinois. Don’t believe me? Watch where he goes in the draft next week.

X-Factor: Jesse Scholtens, rhp, Wright State. He’s already nailed down some very good power-conference teams this year and makes the Raiders a favorite in a critical opener against Notre Dame.

Best Starting Rotation: Illinois. Duchene, plus the next three best starters in the regional. And that’s not taking into account that the Illini’s best pitcher is in the bullpen.

Best Bullpen: Illinois. Ohio’s got a good one, but it doesn’t include Tyler Jay.

No. 1 Seed Win Probability (1-10): 9. Anything can happen over the course of a weekend, but barring a complete Illini implosion, I don’t see any reason to forecast an upset. 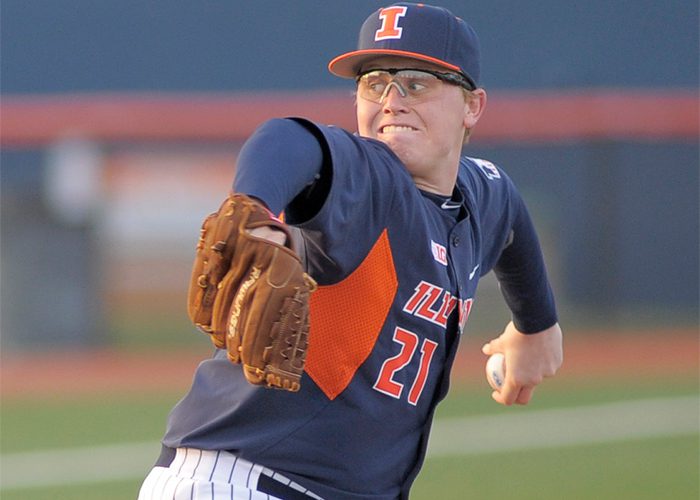 Illinois treated the Big Ten like a starving man would treat a plate of potato salad: 21-1 in the regular season, including a national-best 27-game winning streak that stretched two months. Even after losing a pair of strange games in the Big Ten tournament, the Illini still look pretty invincible in this bracket, mostly thanks to a pitching staff that, even with Tyler Jay in the bullpen, goes four quality starters deep. Friday night starter Kevin Duchene (10-1, 1.30) doesn’t throw as hard as Jay, but he’s got an excellent slider and pinpoint command. Just as point of illustration, Duchene could not be any more different stylistically than Vanderbilt’s Carson Fulmer, his likely Game 1 opponent should both teams advance to the super regional, but he surrenders nothing to Fulmer in quality, animated self-confidence or bespectacledness. Behind Duchene are Drasen Johnson (9-3, 2.17), John Kravetz (5-0, 3.32, plus a 92-pitch complete-game shutout against Michigan State in Minneapolis) and Rob McDonnell (7-2, 2.19). These pitchers have as strong a commitment to throwing strikes as any in the nation (No. 4 in BB/9), while still missing bats with an avalanche of sliders (No. 5 in K/BB ratio, No. 4 in ERA). Under the supervision of catcher Jason Goldstein and pitching coach Drew Dickinson, the Illini always seem like they’re a pitch or two ahead of the competition.

That’s not to say they can’t hit—they also go seven deep in batters hitting .290/.350/.400 or better, led by Big Ten player of the year David Kerian (.366/.452/.644). Potential knocks on Illinois? Well, they played a relatively weak conference schedule, meeting only one of the Big Ten’s four other regional teams (Indiana, whom they beat twice) in regular-season play. And while this is a heavily junior- and senior-laden team, coach Dan Hartleb hasn’t had to use the back end of his roster much—his top four starters started 53 of 56 games, and his top nine position players have all started 44 games or more. That said, with this lineup and rotation, you’d be okay with that being your biggest potential weakness, wouldn’t you? 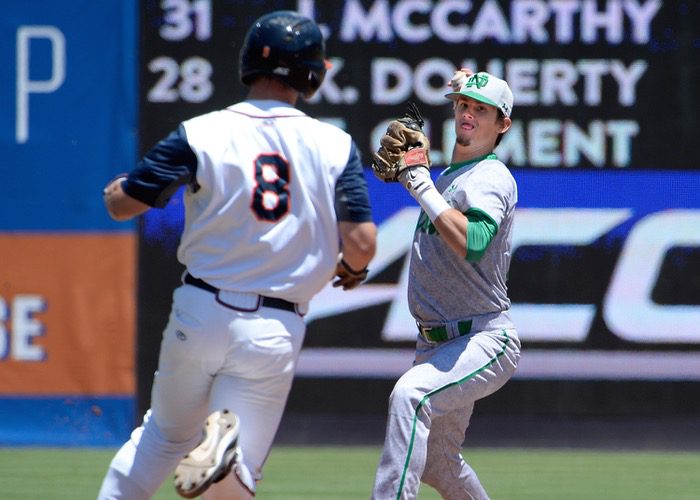 Notre Dame doesn’t do anything incredibly well, either on the mound or at the plate. In fact, looking at this team top to bottom, it’s kind of tough to figure out what there is to like about the Fighting Irish. They aren’t in the top 150 in the country in any of the three triple slash stats (AVG/OBP/SLG), and if “Pitchers Facing Notre Dame” was a college, it’d have a better staff K/9 than Illinois. On the other side of the ball, Notre Dame ranks dead last in the ACC in K/9, and while winning the battle over strikeouts isn’t the entire game, it’s a good chunk of it. The Golden Domers have lost series to Northwestern State and Wake Forest and split the season series with Boston College. Take all that together and you’d think that if the Irish face Illinois, the result would best be described using verbs you’d find on a Waffle House menu: smothered, chunked, peppered, diced.

But Notre Dame also swept Florida State and ran out to a 17-13 ACC record, so the Irish must be doing something right. Ryan Smoyer (9-0, 2.13) is something a marvel, pitching as well as he has while striking out only 31 batters in 71 2/3 innings. As strikeout rates go, that’s well below what’s usually survivable for a righthanded pitcher, and yet on he goes. Notre Dame’s +97 run differential (+26 in ACC play) is more than respectable, and then there’s the defense. Notre Dame ranks first in the country in double plays turned and eighth in fielding percentage, so inasmuch as the data available for college baseball allows us to evaluate defense, Notre Dame has a really, really good one. And when games, or even tournaments, can turn on a bad double play transfer or a ball off a third baseman’s glove, defense is no small thing to be good at. 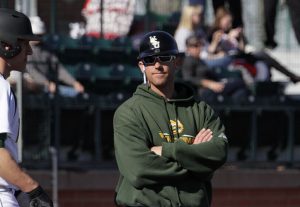 Wright State, a No. 3 seed by virtue of a 41-15 record and victory in the Horizon League tournament, is a very interesting team. The Raiders started better than the standings suggest, losing consecutive weekend series against Ole Miss, Miami and Missouri State, but they won one game in each of those series, and four of their six losses came by only one run. Wright State shares a namesake with—and, in fact, its campus abuts—Wright-Patterson Air Force Base in Dayton, Ohio, which was home of Strategic Air Command during the Cold War. Since conference play started, the Raiders have gone on a bombing campaign of their own: the team batting line of .294/.379/.419 is the result of a lineup without easy outs, rather than one guy dragging the entire lineup along. Six Raider hitters with 100 at-bats or more slugged .400 or better, and seven post an OBP of .350 or better. Ten Raiders won either first- or second-team All-Horizon League honors. That’s not to say there isn’t star power on Greg Lovelady’s team: Ryan Fucci hit 13 home runs, while Mark Fowler hit .341/.408/.510 with 16 stolen bases.

On the mound, righthander Jesse Scholtens wouldn’t look out of place in a power conference rotation—the Arizona transfer tops out in the low 90s, beat Ole Miss in February, and two weeks later pitched Missouri State’s Jon Harris to a standstill. If I had one game to win, I’d probably take Scholtens over anyone in this regional who doesn’t play for Illinois. Relievers Andrew Elliott and E.J. Trapino combined to strike out 116 in 93 2/3 innings. We have a very good idea what Wright State does to other teams at its level, and early results hint at the potential for the Raiders to repeat what Kent State and Stony Brook did in 2012. 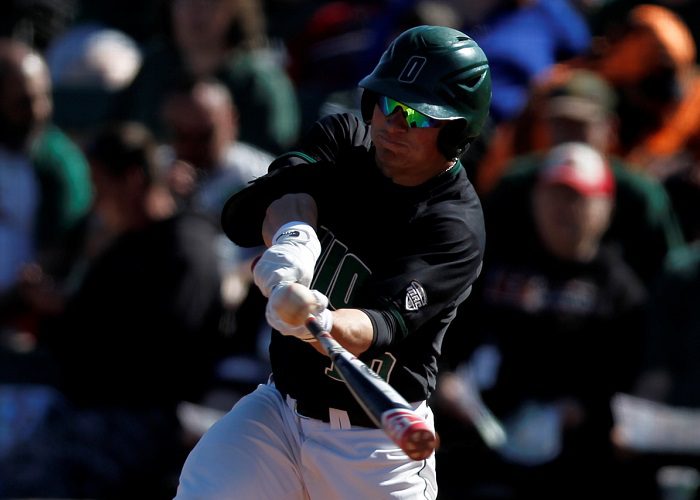 Bobcats coach Rob Smith, in our preseason questionnaires, was the only person to pick his Bobcats to finish higher than 10th in the MAC—he picked them to finish third. That’s exactly what happened. And when Kent State and Central Michigan crashed out of the conference tournament early, the Bobcats cakewalked to the automatic bid, and thanks to a no-hitter by Connor Sitz, did so with a little bit of panache.

Like Wright State, Ohio boasts a really nice, balanced lineup, though sophomore outfielder Mitch Longo (.351/.424/.500) is the offensive leader. Longo has the range to play center field, but he’s been displaced by junior-college transfer Manny DeJesus, who’s a slightly built leadoff man without a ton of speed or power, but he’s always on base and plays a smart, unfussy center field. Offensively, Smith’s philosophy mostly boils down to getting on base (219 walks, 52 HBP) while avoiding strikeouts (260, 11.4 percent of plate appearances). On the mound, the rotation has been shaky. Even Sitz (7-2, 4.62) walked five and only struck out four in his no-hitter, while Jake Rudnicki (3-4, 5.79) has been even worse. Jake Miller (6-3, 2.80) entered the rotation in midseason and won two starts in the conference tournament, while an outstanding bullpen led by converted position player Logan Cozart (7-1, 1.36, 13 saves) has helped fill the gaps. Barring something unexpected, Ohio will probably be cannon fodder for Illinois in the opener, but could easily win a game here to cap off an incredible season.