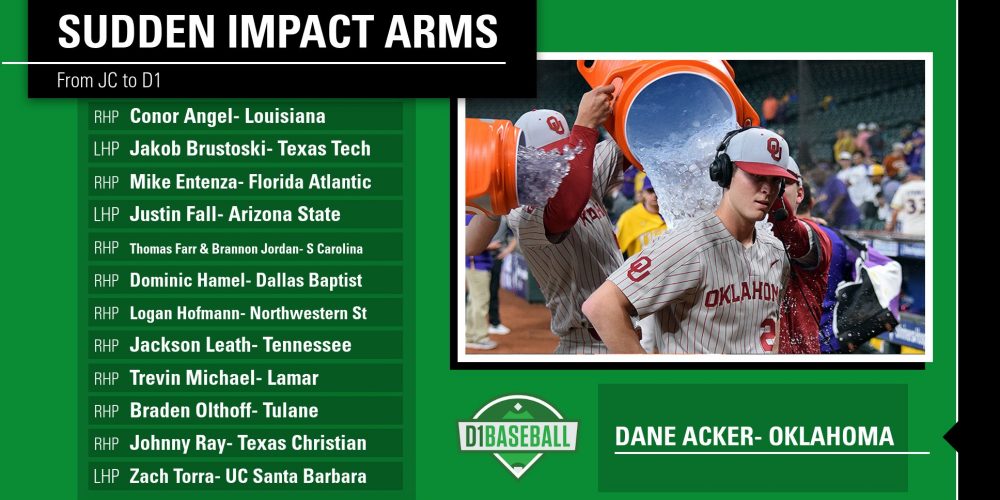 When four-year Division I programs recruit JUCO athletes the prerequisite is very simple: Find players who can contribute right away. Or better yet, provide the program with a SUDDEN IMPACT.

With typically only two years of eligibility remaining for JUCO transfers, long-term development is not in the cards. Today we identify 14 of the top JUCO transfers who provided an immediate impact during the shortened 2020 season. A few of them will likely be selected during the upcoming draft, while the others will return for a second junior season, and even more ready to hit the ground running next spring.

Dane Acker, RHP, Oklahoma– Acker made a quick highlight during the shortened 2020 season with a no-hitter against LSU at the Shriners Hospitals for Children College Classic. It was the first no-hitter in the 20-year history of The Classic and the first time LSU had been no-hit in a nine-inning game in history. Acker completed his no-hitter with 11 strikeouts, one walk and two hit batters. A 6-foot-2, 190-pound right-hander with a loose, on-line delivery from high three-quarter slot, Acker sits 91-93 mph with great down angle on his fastball. He also features a mid-80’s slider, a big breaking curveball ranging from 78-81 mph and an average, fading 84-86 mph changeup. Acker is polished with good command. He has great feel, locating his fastball while inducing numerous off-balance swings with the ability to mix all of his pitches. There isn’t much ceiling to his stuff, but he has a solid floor and the abilities for immediate success at the next level. After selection by the Diamondbacks in the 19th round out of San Jacinto JC, TX last June, look for his name to be called much earlier this time around. Acker finished the 2020 season 1-1, 3.51 ERA, 25.2 IP, 15 H, 5 BB, 28 SO, .170 OPPAVG.

Check out the full list by clicking below and subscribing!