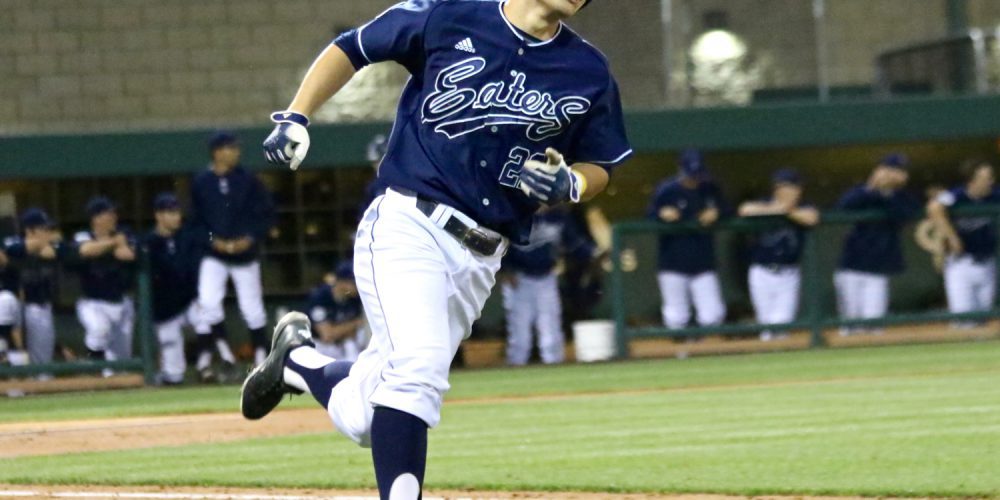 IRVINE, Calif. — Mike Shawaryn and Taylor Bloom have assured that Maryland will have a great chance to win every weekend and so far the Terrapins have successfully done that three of the first four weeks.

However, things have been drastically different during midweek contests. Coming off a series win over a quality mid-major Bryant program, Maryland dropped another on Wednesday, 9-5 at UC Irvine to fall to 7-9 on the season and 0-4 in midweek games.

“We just really haven’t been very good pitching- and defense-wise away from the weekends,” Maryland head coach John Szefc said. “We’re trying to fix it.”

After his midweek starters had given up more runs than innings pitched in each of the first three games, Szefc turned the ball over to junior lefthander Tayler Stiles for his first start since being hit in the face with a line drive last April. Stiles’ outing was up and down. Pitching with a clear face mask, he was charged with two earned runs in 4.2 innings, but gave up six total runs as the defense didn’t help him out. Maryland made two more errors, increasing their midweek total to nine in four games, compared to 13 in 12 weekend games. 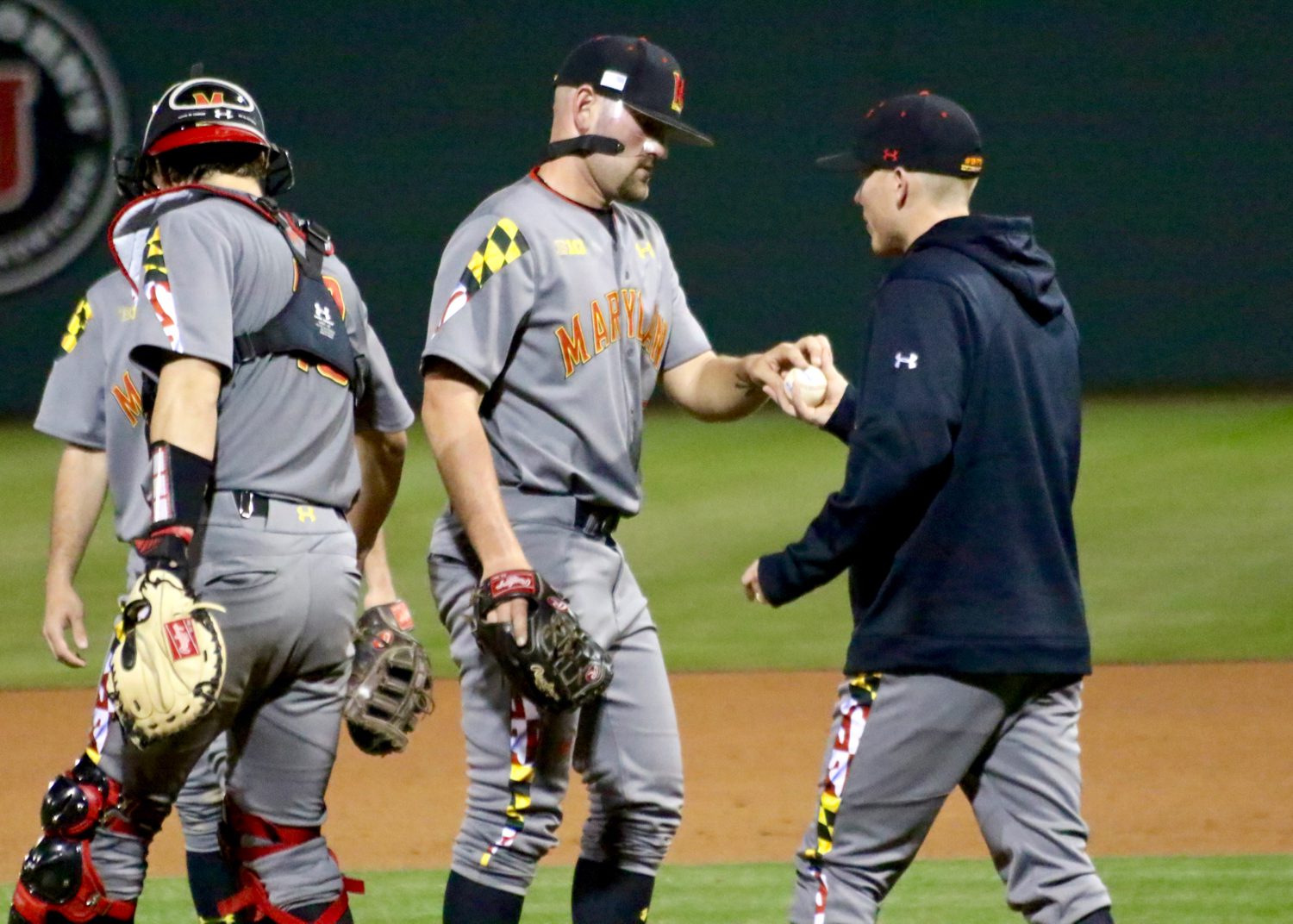 Tayler Stiles is relieved of his pitching duties. (Shotgun Spratling)

Keston Hiura singled home the first run of the game in the third inning after a two-base error allowed a runner to advance to third base. UC Irvine added three unearned runs the next inning. The Anteaters squeezed home a run before Cole Kreuter hit a two-run single, but all three runs were set up by a routine fly ball that was dropped by Madison Nickens.

The Maryland offense answered both times to even the game up, keeping Stiles in the game. Nickens made up for his defensive blunder with a two-run triple and scored the tying run on a UC Irvine error. But when Stiles got in trouble again in the fifth inning, he couldn’t wriggle off the hook. With two men in scoring position, he got back-to-back strikeouts with breaking balls in the dirt, but Jake Hazard lined a pitch up in the zone through the left side for a two-run single.

“He was just kind of inconsistent with it,” Szefc said. “He was getting behind hitters a little bit. Any time you put hitters in good counts, you kind of know where it’s going to go.”

Maryland responded with a run in the top of the sixth inning, but freshman reliever Miles Glazier came on and limited the damage to keep Irvine ahead. It added two more runs in the sixth inning and another in the eighth to pull away as first-year Anteaters Glazier, Ben Ritchey and Calvin Faucher combined for 3.1 scoreless innings of relief.

One of the causes of Maryland’s slow start has been the underwhelming performances of fifth-year senior centerfielder Anthony Papio and redshirt sophomore righthander Ryan Selmer — two guys that have been key contributors previously for the Terps.

Papio was 0-for-4 with two strikeouts on Wednesday night and is now hitting just .164 with 17 strikeouts in 16 games. With more than 170 career starts under his belt, Papio needs to make more hard contact. He hasn’t been overaggressive at the plate, leading the team with 10 walks and he isn’t going to be a guy expected to drive in a ton of runs from the three hole or mash homers as a clean-up hitter, but he has to be more productive.

Even more important, Papio can’t take his offensive struggles to center field where he’s taken over for departed superstar LaMonte Wade. He cost Maryland a run against Irvine when a runner tagged up and scored from third as Papio nonchalantly caught a shallow pop. Whether Papio didn’t realize the number of outs or assumed the flyout was too shallow to send the runner, his late throw gave UC Irvine shortstop John Brontsema time to slide in safely.

The run was charged to Selmer, who gave up two runs on two hits and two walks while recording two outs. Selmer sat 86-90 with his fastball from a low slot, but he struggled to consistently hit the mitt and left some balls up in the zone. He’s not a strikeout pitcher, so he has to work down in the zone and let the ball run off his fingertips, so it will get more movement. 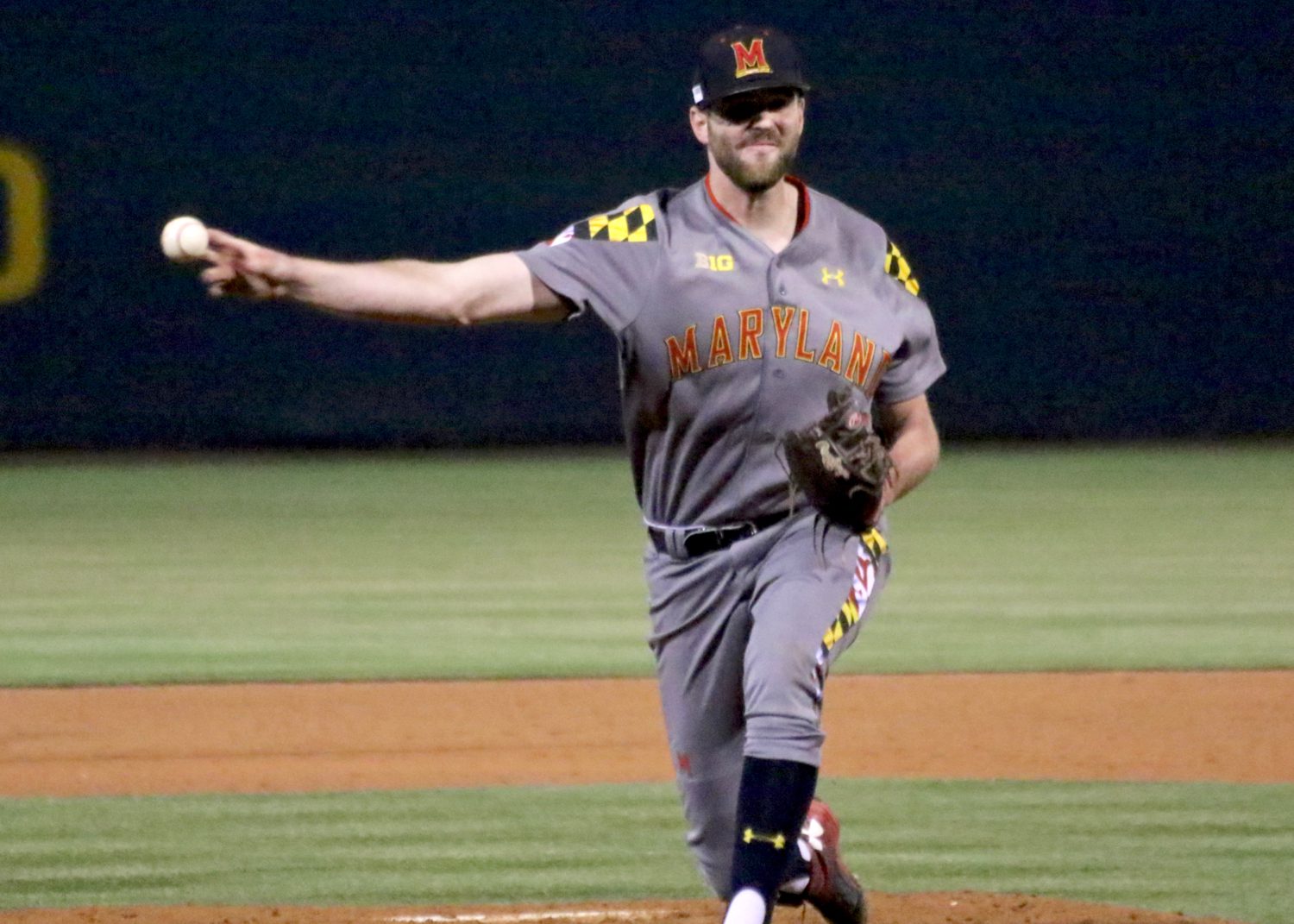 Selmer is a critical element of the Terrapins’ pitching staff because he is capable of being a swingman available for short or long appearances. Last year, he tied the school record with 31 appearances, going 3-1, 2.18 in 53.2 innings. But this season, he has a 9.31 ERA in nine appearances.

What’s the explanation for Papio and Selmer’s struggles? Szefc doesn’t have the answer.

“I can’t give you one. I wish I could. You’ve got experienced guys. They’ve had success on a high level in the postseason.”

Szefc isn’t losing faith, saying he’s going to hang with both Selmer and Papio, though he admitted that the Terrapins are going to “sink or swim” with them.

Keston Hiura just continues to be a punisher of baseballs. He hit .330 with seven homers and 52 RBIs last season, but he’s on track to smash those numbers this year. He’s taken his game to another level with a patient approach and an ability to make pitchers pay for mistakes.

“I’ve been seeing a lot of offspeed pitches, a lot of pitches that are not necessarily my pitch, but their pitch. I’ve just got to stick with my approach and hit my pitch because if I’m swinging at bad strikes our balls, it’s not going to help anyone.”

Hiura finished Wednesday’s game with two walks and two ropes for base hits, including turning an 86 mph Ryan Selmer fastball into a 98 mph rocket over the shortstop that he turned into a hustle double. He scored two runs, drove in UC Irvine’s first run, stole two bases and also made a diving catch in center field.

The Big West Freshman of the Year and preseason All-American has made tremendous strides defensively after being converted into an outfielder during his freshman year. He’s getting great reads on the ball and has made a handful of catches on the warning track without any fear in the couple of games we’ve seen Hiura in person this season. Add that to his .467/.551/.833 slash line with five homers and 16 RBIs and you’ve got a sophomore star — a true game changer night in and night out.

UC Irvine OF Keston Hiura talks about his hot start and having John Brontsema back in the lineup to give him some added protection. Hiura also discusses Irvine’s back-and-forth 9-5 win over Maryland:

– Maryland’s experienced players have to do more to help their young stars. Freshmen Nick Dunn, Marty Costes and Andrew Bechtold are off to strong starts. They just need a little help and that would be in the form of consistency from the some of the players around them. Getting Papio, Selmer and Stiles going could be the difference in another super regional appearance and not even making the NCAA tournament.

Juniors Madison Nickens and Nick Cieri swung the bat well on Wednesday night, which is important because the Terrapins need them to combine with Dunn to drive in some runs this weekend at Cal State Fullerton.

– John Brontsema’s strong start since returning from an early season injury is huge for the ‘Eaters since someone has to be able to protect Hiura. Cole Kreuter continues to be a table setter in front of the duo as well. Now if they could get the brawny bats of Adam Alcantara, Jonathan Munoz and Andrew Martinez going, UC Irvine could suddenly become a West Coast contender rather than just a Big West competitor.

〈
Previous Article Week 4 Power Rankings: Third Base
Next Article Sorenson: Off The Top Of My Head, March 18
〉