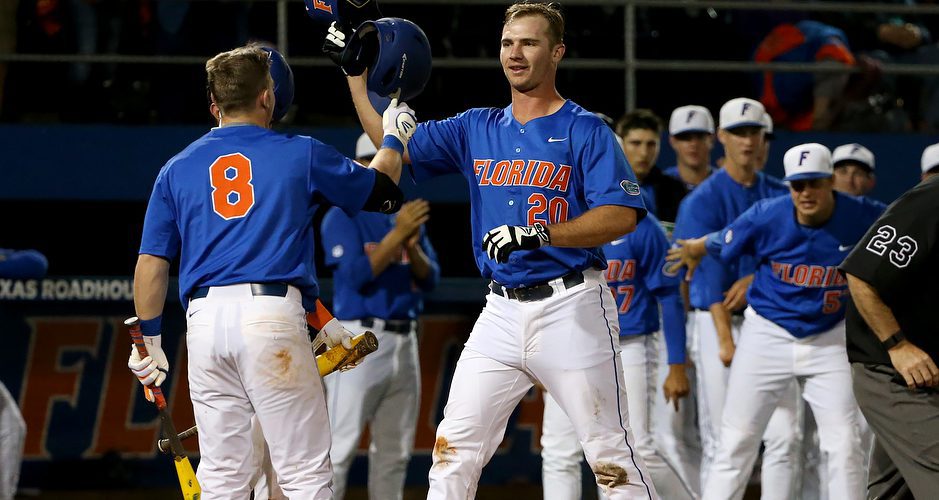 Peter Alonso and Florida bounced back in impressive fashion. (Florida)

HOW FLORIDA STATE GOT HERE: The sun came up this morning and Florida State is back in a super regional. The Seminoles put together a solid regular season campaign, and pretty much dominated their regional by using a combination of big-time offensive production and pitching in key situations to take care of business

HOW FLORIDA GOT HERE: The Gators put together a strong regular season and played for the SEC tournament title before rolling through the Gainesville Regional in rather impressive fashion with hard-hitting first baseman Peter Alonso and others leading the charge. The Gators, by the way, did not lose a game to the Seminoles this season, though, admittedly, all three games of the series were midweek affairs.

Starting Pitching: It’s pretty safe to say the Gators have the edge in the starting pitching category. Though AJ Puk can be a little iffy at times, he’s got the draft over with and he now heads into the weekend with no pressure. Puk will sit in the mid-90s with his fastball, while also showing feel for his slider at times. The slider isn’t a true putout pitch just yet, but it’s good enough if he’s command his stuff. Logan Shore will attack hitters with a three-pitch arsenal, but it will be interesting to see how he fares this weekend as he hasn’t been quite as sharp as of late. Meanwhile, you could argue that Alex Faedo is Florida’s best arm. Faedo is another velocity guy who consistently shows sharp secondary stuff. If Florida’s starting rotation is clicking on all cylinders, it could be a long weekend for the Seminoles. However, they must throw strikes against FSU’s lineup.