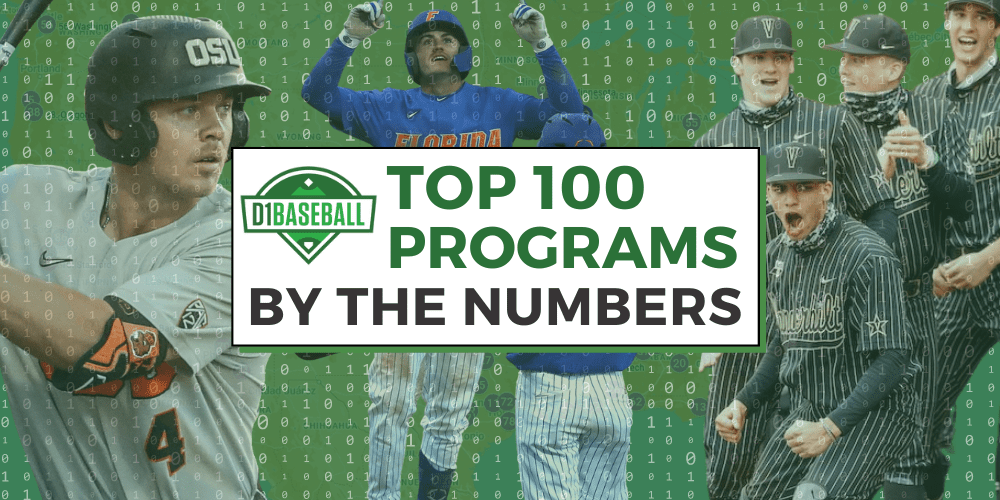 Over the last two weeks, we have counted down the top 100 programs in college baseball, as they stand in 2022. For the purpose of this exercise, we don’t care what happened in the 1970s or 80s, or even the 90s — that’s ancient history to a potential recruit in 2022. Tradition is nice, but it’s more important to establish a tradition of consistent winning in the last decade, and especially in the last five years. Our ultimate goal here is to identify the programs in the best shape right now, with an eye toward the next five to 10 years.

Now it’s time to unveil the entire Top 100, in chart form. The chart below is sortable by state and by conference, which makes it easy to see how all of the Top 100 programs stack up relative to the other teams in their state and league. A few factoids:

• California is now tied with Texas for most teams in the top 100 with 10 apiece. That’s a decrease of four teams for California since 2019, and an increase of one team for Texas. Those states are followed by North Carolina (nine), Florida (seven), Louisiana (six) and Virginia (five). Alabama, Georgia, Indiana have four teams apiece on the list.

• Fifteen teams entered the Top 100 after being unranked in 2019. That represents more turnover than the last time we conducted this exercise, as just 11 new teams entered in 2019. Out of our newcomers, Notre Dame made the biggest vault, landing at No. 40. Others that made big jumps into the Top 100 include Central Michigan (No. 55), Old Dominion (No. 64) and Georgia Southern (No. 65).