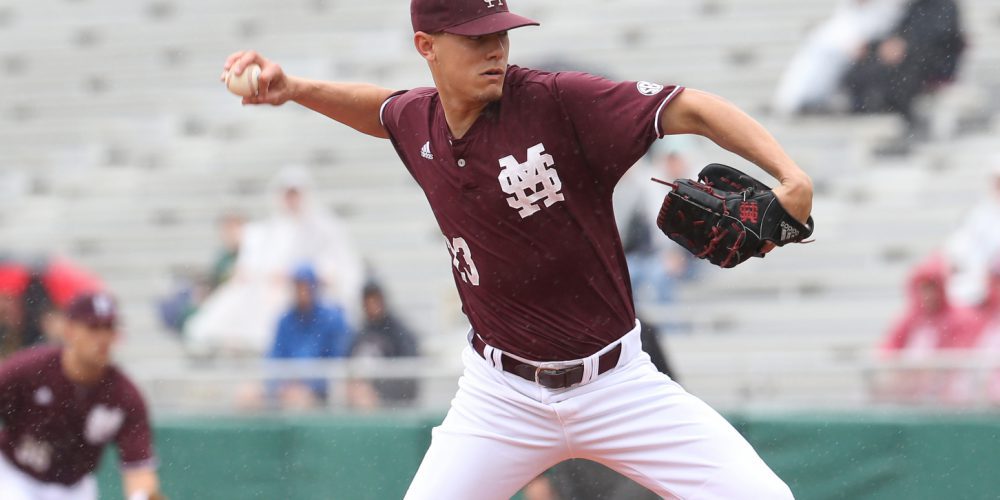 1.  Team of the day: Mississippi State

The Bulldogs had looked just OK the first three weeks of the season, but all eyes were on them coming into the weekend with a huge home series against an Oregon pitching staff that almost been flawless so far this season. Well, the Bulldogs scored 10 runs in a series-opening victory, before really making a statement on Saturday with a dominant 9-3 triumph to take the series.

Though the offense had their fair share of success in this one, the tone was ultimately set by veteran righthander Austin Sexton, who had a career day on the mound. Sexton, a 6-foot-1, 185-pounder, junior, had a career-high 12 strikeouts while also allowing just four hits in six shutout innings. 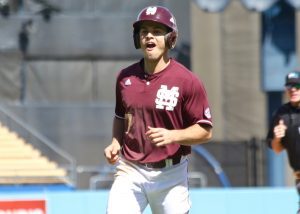 Offensively, leadoff hitter Jacob Robson had a quality day at the plate, going 2-for-4 with a triple and an RBI, while Cody Brown and Ryan Gridley each had two hits, with Nathaniel Lowe and Hunter Stovall each knocking in a pair of runs. For the Ducks, ultra-talented lefthander Matt Krook didn’t make it out of the first inning, allowing five runs on two hits in 2/3 of an inning and throwing 17-straight balls at one point.

We’re not ready to anoint the Bulldogs the nation’s best or anything like that, but this weekend certainly elevated their profile a great deal.

Well, well, well, where have we heard this before? The Seminoles were expected to be somewhat of a work in progress coming into the season, but they already have a marquee series victory after clinching a home series win over Georgia Tech with a 14-9 win on Saturday.

FSU starting pitcher Drew Carlton didn’t have a great day on the mound, allowing five runs on 10 hits in 3.1 innings, but the offense more than took care of business with first baseman Dylan Busby smacking a home run and knocking in three runs. Meanwhile, leadoff hitter Taylor Walls had a big day as well, going 2-for-5 with two RBIs.

FSU might still not to be a finished product, but the weekend went a long way in proving its stock as one of the nation’s elite.

The Cavaliers haven’t looked particularly sharp the past few weeks (sound familiar to last year’s start?), but had a chance to start with a clean slate on the road against Duke this weekend. Virginia took care of business in the series opener before clinching a series victory on Saturday with a 7-6 triumph over the Blue Devils.

Virginia catcher Matt Thaiss had a double, three hits and two RBIs, while Adam Haseley and Ernie Clement each finished the contest with a pair of hits, and five other UVa. hitters also recorded a hit.

We’re not ready to anoint the Cavaliers defending national champs just yet, but a weekend series win over a quality Duke club definitely was a step in the right direction. And oh yeah, despite some early struggles, the Cavaliers are still 11-4 overall.

The Cardinals are quietly starting to get their act together since dropping that tough series at Ole Miss a few weeks ago. UL won the series opener against Notre Dame with lefty Brendan McKay leading the charge, and they were back at it again on Saturday with a series-clinching 1-0 win over the Fighting Irish.

UL veteran lefthander Drew Harrington, a 6-foot-2, 229-pounder, led the charge for the Cards, striking out seven, not walking anyone and allowing just five hits in eight shutout innings.

Though he was tabbed with the loss, Notre Dame starting pitcher Sean Guenther put together a quality start, striking out four, walking two and allowing a run on six hits in 7.2 innings of work.

At 13-2 overall and heating up, Louisville, to no surprise, looks like the ACC’s cream of the crop in the early going. 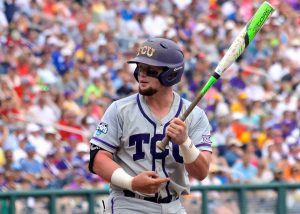 When the Horned Frogs shined a few weeks ago at the Houston College Classic, they did so with Brian Howard and others leading the charge. Well, Howard, a talented righthander, struggled on Saturday, allowing four runs on eight hits in just 3.1 innings, but the offense more than took care of business in a series-clinching 12-11 win over USC.

TCU hard-nosed catcher Evan Skoug truly had a night to remember, going 4-for-6 with a trio of doubles and a home run, along with three RBIs, while Cam Warner and Elliott Barzilli each knocked in a pair of runs, and Michael Landestoy went 2-for-4 with two RBIs. Landestoy is an athletic young player who hasn’t gotten a lot of chances during his short time at TCU, however, it appears he’s making the most of his opportunity.

As much discussion as there was about TCU’s pitching staff coming into the season, the offense already has risen the occasion multiple times. 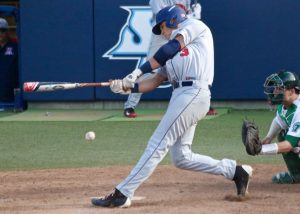 Much had been made about Bobby Dalbec’s poor start over the past few weeks for good reason. Dalbec and the Wildcats, though, went wild at the plate in a 23-1 home win over gritty Sacramento State.

Arizona is now 10-4 overall and this continues to look like a team that will legitimately compete for a berth in the NCAA postseason. Perhaps we shouldn’t be so surprised by that reality after what Jay Johnson did at Nevada.

Troy Buckley’s Dirtbags entered the season with NCAA postseason hopes, but we’re not sure anyone saw them getting off to such an impressive start, improving to 10-4 overall after a doubleheader sweep of Oklahoma by scores of 6-3 and 7-3.

In the first game, LBSU starting pitcher Darren McCaughan struck out five and allowed three runs on six hits in six innings, while designated hitter Luke Rasmussen led the charge at the plate with a home run, including a run scored and two RBIs.

In Game Two, Chris Mathewson led the way for the Dirtbags, striking out five and allowing three runs (two earned) on four hits in seven innings, though his command wasn’t the best at times.

Long Beach State joins plenty of other Big West teams in the productive category so far this season. 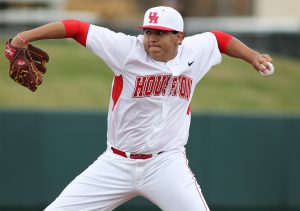 It’s well documented around these parts, but Houston didn’t exactly look the part the first few weeks of the season with Seth Romero out of commission, and the team as a whole scuffling to establish consistency. Well, Romero returned to the mound and had a career night in a 3-2 series-clinching road win over Alabama.

Romero recorded 11 strikeouts, walked just two and allowed just two runs on five hits in six innings, while Bubba Maxwell and Nick Hernandez were terrific out of the bullpen with scoreless appearances.

Joe Davis had another extra-base hit for the Cougars, while Justin Montemayor and Connor Wong each led the charge with a pair of hits and an RBI.

Houston is now 8-5 overall and trended the right direction, while Alabama suddenly looks like a team with a n offensive identity issue. 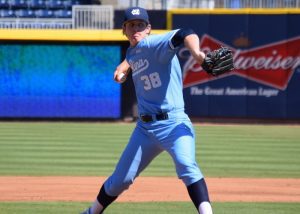 The Tar Heels have one of the nation’s elite talents in Bukauskas, the sophomore righthander. However, there have been times in the past when Bukauskas dealt with some command issues. That wasn’t Saturday, as the second-year hurler shined in a 4-0 series-clinching win over Pittsburgh.

Everything has really clicked for North Carolina so far this season, and it will be interesting to see this club, and Bukauskas, as ACC play continues.

Our Aaron Fitt got a chance to see Bryant a few weeks ago out in California and came away very impressed. Well, the Bulldogs have continued to win since that point and improved to 9-3 overall with a 2-0 road win over Maryland.

Steve Owens’ Bulldogs look like a team that will finish the season with an at-large berth in the NCAA postseason, while the Terrapins desperately need to get their act together with a 6-8 overall record thus far.