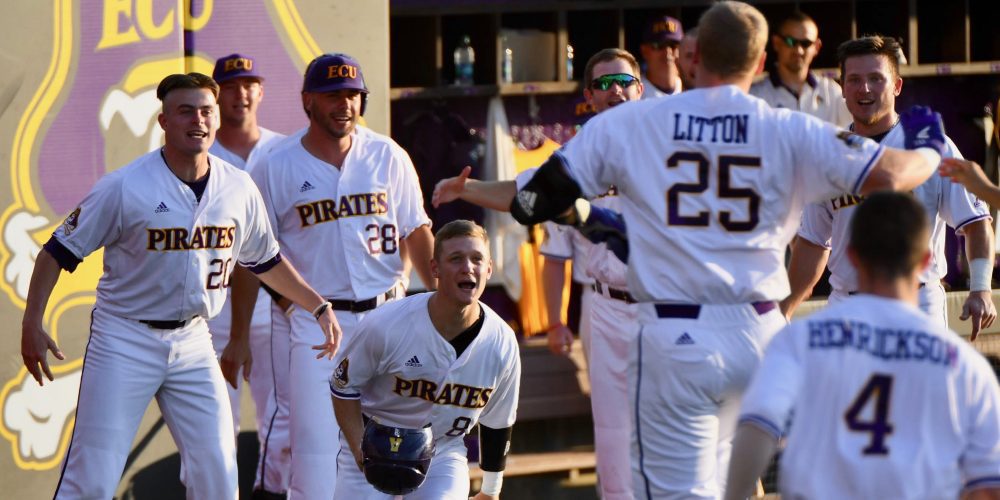 GREENVILLE, N.C. — East Carolina and UNC Wilmington faced off twice during the regular season, and the Pirates won both tightly contested affairs, 6-4 and 5-4. So these teams had plenty of respect for each other, but there’s a difference between a midweek game in early April and a regional opener in front of 4,700 fired-up fans who have been waiting since 2011 for another home regional game at Clark-Leclair stadium.

And East Carolina was not going to be denied on this night. The Pirates blitzed UNCW ace Alex Royalty for four runs in the first inning and never looked back, scoring in seven of the eight innings they came to the plate and cruising to a 16-7 win in their Greenville Regional opener. They fed off the incredible energy in the stands and made UNCW pay whenever it made a defensive miscue, and they never eased off the accelerator.

“It’s one of those things where, you don’t get those opportunities very much, when you can fire up the crowd like I did,” Litton said. “I mean — as the other team, you’re looking at like 5,000, 6,000 people cheering, that’s something that’s just gonna be like, ‘Oh crap. They’re up on us now, the crowd’s into it.’ It’s hard to come back from that.”