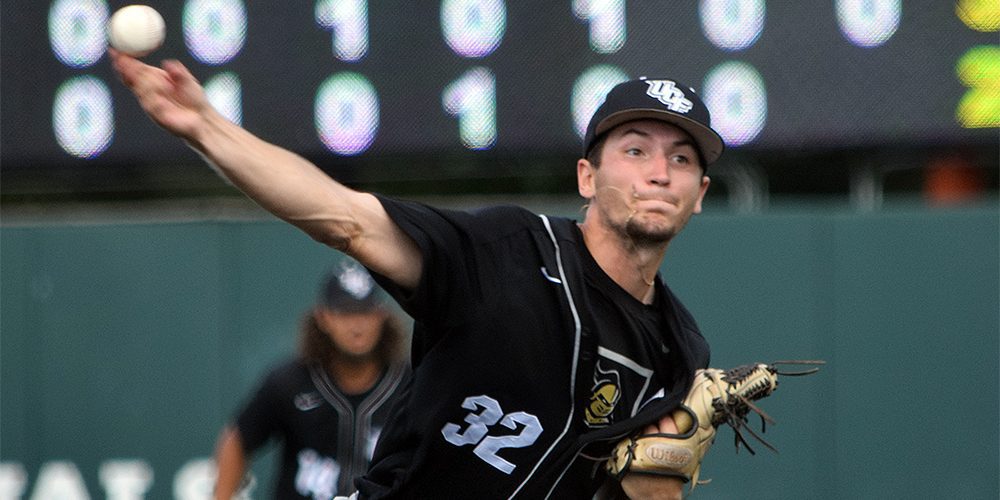 HOUSTON — UCF’s doubleheader sweep of red-hot Houston on Saturday is further proof of the importance of a strong, powerful and deep bullpen.

The tone for a series can be set by the bullpen, and that was the case in the middle innings of the series opener between the Knights and Cougars.

In the opener, UCF veteran righthander Cre Finfrock allowed two runs on three hits in five innings. He was solid the first five frames, and the Knights sent him back out for the sixth frame. That didn’t go so well, as Finfrock walked Grayson Padgett and Jared Triolo before allowing an RBI single from Joe Davis. Finfrock then proceeded to hit Tyler Bielamowicz to once again load the bases. UCF head coach Greg Lovelady didn’t hesitate. He went to one of his many bullpen stoppers — Thad Ward.

Ward was a starter for the Knights earlier this season. He’s made five starts this spring, but as the Knights get closer to the postseason, he’s developed into more of a premier bullpen arm. In this particular situation against the Cougars, Ward inherited a real mess, but he wasn’t fazed by the situation. He struck out Lael Lockhart on a 93 mph fastball before inducing a pop and punching out another UH hitter to end the inning.

Sure, the Cougars still tied the game in the sixth, but it could’ve been a lot worse if not for Ward’s mound prowess.

Ward’s relief outing set the tone for a UCF bullpen that also came up big in the second game of the doubleheader, and will be needed down the stretch if this team wants to make some serious noise the rest of the regular season and into the NCAA tournament.

“Obviously our pitching is our strength right now, and they’ve given us a chance to win every game despite the fact we’ve let them down at times with poor defense and other things,” Lovelady said. “We’ve turned the dial up a little bit as of late, and we’re starting to win those games now.

“The games earlier in conference that we kind of let get away, we are doing a much better job of finishing those games now,” he continued. “And a lot of it is because we’re really deep in the bullpen. Thad and JJ both started earlier this year, and we are comfortable that with those guys and other relievers. I think we can hang with anyone in the country. We just have to get more offense and production from the bottom half of our lineup.”