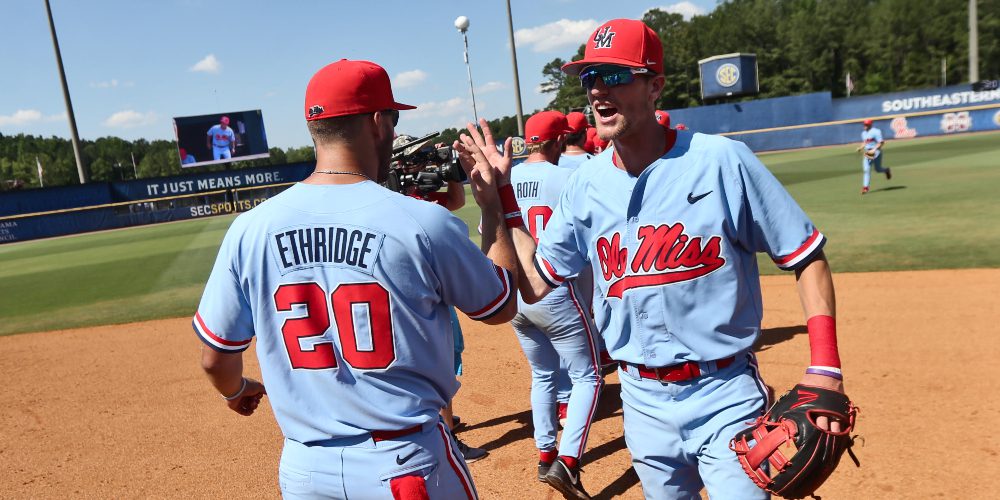 HOOVER, Ala. — It’s better late than never for Ole Miss.

The Rebels faced a tall task Saturday afternoon against Georgia. They knew coming into the day they’d have to face Georgia’s two-headed rotation monster of Emerson Hancock and Tony Locey. But it didn’t matter. As they’ve done all week, the Rebels got hits in big situations, banged out 11 hits total and got yet another crop of clutch pitching performances to beat the Bulldogs, 5-3, to advance to Sunday’s SEC tournament title game against Vanderbilt.

Ole Miss is no stranger to playing in the title game. It dropped its SEC tourney opener last year, but proceeded to rattle off four straight wins, including a title game win over LSU, to earn a national seed. The stakes have been different this season with the Rebels trying to sneak into the backdoor to a regional host and not a national seed. But they’ve put together another strong run in the tournament, beating Missouri in the opener before losing to Arkansas in the second game. However, they’ve since won games over Texas A&M, Arkansas and now Georgia in close fashion, while doing some things they hadn’t done down the stretch in the regular season.

Call it the week the Rebels reinvented themselves.

“I said it on the SEC Now stage, I’ve never really thought about it, but we stumbled the last two weeks, and came here and had a chance to find ourselves, which you can do,” Ole Miss coach Mike Bianco said. “All of a sudden people forget the last two weeks and you head to the postseason and play well.

“Sometimes it happens to older teams,” he continued. “We blew some opportunities that were thrown at us, and we were able to answer on the mound and defensively with some key hits. Once you have a little bit of that success, you start to roll a little bit.”

Bianco and Ole Miss fans would agree this is a much better feeling than the past few weeks. The Rebels were inconsistent throughout SEC play. They’ve had some stinkers, such as a home series loss to Kentucky. But they’ve also had some big-time accomplishments, taking a road series from Arkansas way back in March and taking a series at LSU late in the conference season. They also swept Texas A&M and went 4-0 against the Top 16 RPI Aggies.

But things were different after that LSU series down the stretch.

The Rebels, if you remember, held on for dear life in the series finale against the Tigers in Baton Rouge. And for whatever reason, that occurrence spelled doom the final couple of conference weekends. Ole Miss had a rough weekend at home against Mississippi State, getting swept in three games and playing uninspiring baseball in the process. Then, the Rebels blew a midweek game on the road against Arkansas State before hitting the road and dropping two of three to Tennessee.

The discussion progressed from regional hosting plans after the LSU series to fans proclaiming that Ole Miss would not bring back Bianco next season. As far-fetched as the idea seems, there indeed were decision makers who were interested to see how inspired the Rebels would be in Hoover.

They’ve gotten their answer in a big way this week, as many of the things that held Ole Miss back the past few weeks suddenly have been rectified.