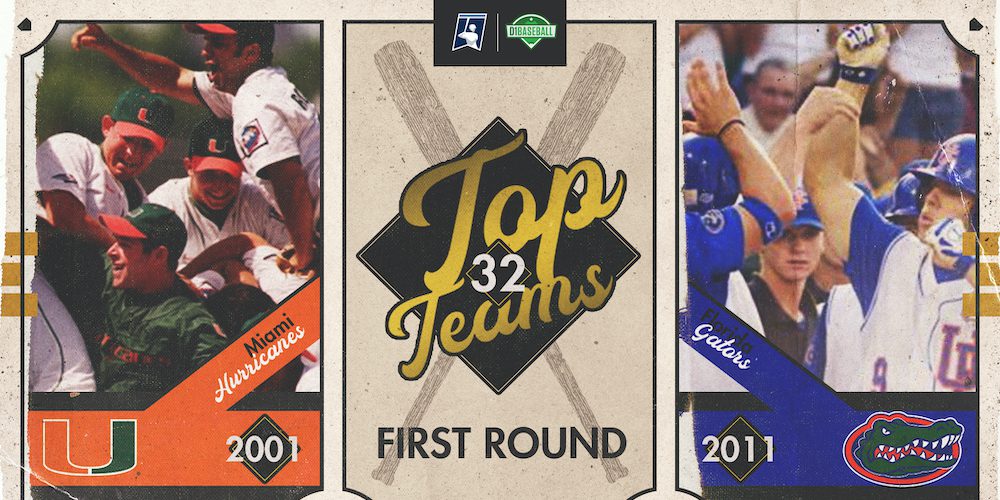 The Hurricanes had a magical 2001 season and did something no team has done in the modern era — win the national title as the top national seed in the NCAA tournament. It’s hard to imagine no one has accomplished that feat, but it’s the truth. Here’s a tip of the cap to the ‘Canes for doing it. It’s incredibly difficult to do with a target on your back.

Not only was Miami’s run through the College World Series and tournament that year impressive, it was also unblemished. The Hurricanes defeated Bucknell, Florida and Stetson in order in the Coral Gables Regional before sweeping Clemson in a Super Regional, scoring 24 runs in the process. Once in Omaha, Miami put up a 21 spot on Tennessee in its first game in Omaha before defeating USC, Tennessee again (this time with 12 runs) and beating Stanford in the national title game in dominant fashion, 12-1.

To give you an idea of how times have changed with the bats in college baseball, one gander at the team batting averages in the 2001 CWS is hilarious. For instance, Tennessee led the field with a whopping .394 team batting average, while the champion Hurricanes were second with a .373 average. The Hurricanes finished third in staff ERA with a 5.75 clip, while also leading the field with a .987 fielding percentage. Danny Matienzo led the ‘Canes in the CWS with a ridiculous .588 average, Kevin Mannix had a .538 average and Kevin Brown hit .467 with three home runs. Current UCF head coach Greg Lovelady also was a member of the squad.

At some point, a team will win the national title again as the top national seed. But for now? It’s a flag that is firmly planted by the 2001 Miami club.

In terms of individual standouts in 2011, Bryson Smith led the Gators with a .368 average and two RBIs, while current Big Leaguer Mike Zunino hit .316. Hudson Randall and Karsten Whitson (now a coach at South Florida) were the headliners on the mound. Randall had two starts and a 1.26 ERA in 14.1 innings, along with 11 strikeouts and a walk, while Whitson had a 1.93 ERA in 9.1 innings, along with nine strikeouts and three walks. Nick Maronde, Austin Maddox and Greg Larson had unblemished marks out of the bullpen.

How They Match Up: Comparing the Gators and Hurricanes is pretty difficult. The ‘Canes get the edge for having such an insanely dominant run through the NCAA tournament back in 2001, and for being the only top-seeded team to win the national title. However, those were different times. How would things look if Mike Zunino swung with those old bats? Still, Miami gets the clear-cut edge in the offensive category, while Florida gets the edge in the pitching category. It’s always fun when the two Sunshine State rivals tangle.

Comparing @CanesBaseball and @GatorsBB is pretty difficult. Miami gets the clear-cut edge in the offensive category, while Florida gets the edge in the pitching category. Who do you think would get the dub?

〈
Previous Article Off The Top Of My Head: The Omaha Edition
Next Article CWS Top Teams Bracket: 2012 Arizona vs. 2003 Stanford
〉