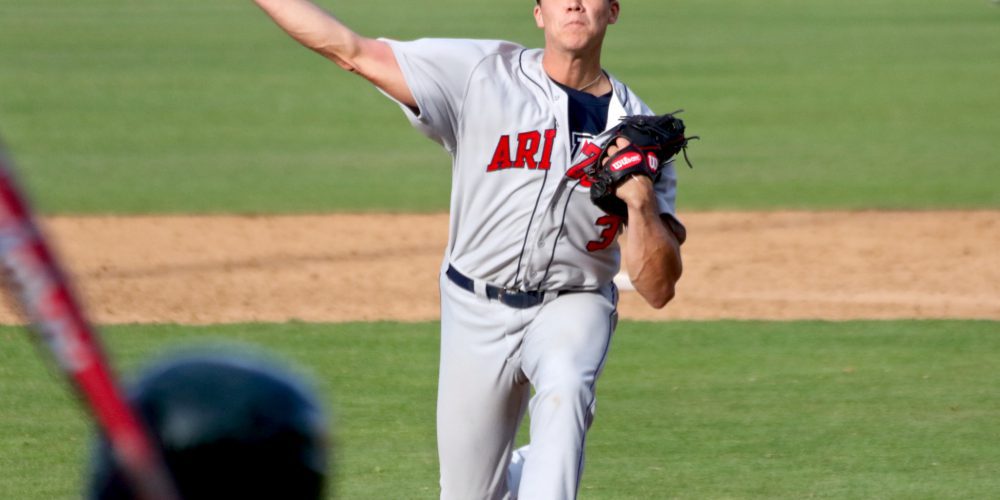 The road underdogs went 3-1 in Friday’s super regional action, putting three national seeds (Mississippi State, Texas A&M and Texas Tech) on the brink of elimination. One favorite (Miami) held serve. Before we get to the roundup, a couple of quick awards:

Players of the Day: East Carolina’s Travis Watkins and Miami’s Johnny Ruiz will have to share this one — they each blasted two homers, including a grand slam apiece.

Pitcher of the Day: Bobby Dalbec shut out Mississippi State’s dangerous offense for 8 2/3 innings to lead Arizona to a 1-0 victory in Starkville.

Surprise of the Day: Luken Baker — all 6-foot-4, 265 pounds of him — scored from second base on a wild pitch, as Texas A&M catcher Michael Barash couldn’t find the ball. It was that kind of day in College Station — everything went the Frogs’ way.

TCU’s Luken Baker scores from 180′ feet away on the wild pitch… not a typo! #RoadToOmaha pic.twitter.com/JSwhxEQxQl

So you were expecting a 2-1 pitchers’ duel with first-rounder Justin Dunn on the mound for BC? So were we. But Miami lefthander Michael Mediavilla (7.2 IP, 4 H, 3 R, 2 ER, 3 BB, 7 K) out-pitched Dunn and improved to 11-1 on the season, as the Hurricanes rode the long ball to a 12-run outburst in the series opener.

Dunn won his first battle against fellow first-rounder Zack Collins, striking out the Miami catcher in the first inning. But Collins won the second battle in a big way, blasting a three-run homer in the third that gave Miami a lead it would never relinquish.

Zack Collins has announced his presence with AUTHORITY!

Johnny Ruiz followed with a solo shot later in that inning, and the second baseman added a grand slam in the eighth to break the game wide open. That insurance wound up looming large, as the Eagles plated four runs in the ninth and brought the tying run to the on-deck circle, forcing Miami to summon closer Bryan Garcia to get the final out.

This regional now sets up very well for the Hurricanes, who have beaten BC’s biggest weapon — Dunn. The ’Canes will send Danny Garcia to the mound Saturday to try to clinch another trip to Omaha; BC will counter with Mike King.

TCU struck first with two runs in the top of the first, and Texas A&M punched back with two in the bottom of the frame to tie it. But when the Frogs landed another haymaker in the third on Luken Baker’s three-run homer, the Aggies hit the mat, and never got back up. The Horned Frogs tacked on three more runs in the fifth, highlighted by Ryan Merrill’s two-run double — but TCU starter Jared Janczak (7.2 IP, 6 H, 2 ER, 3 BB, 4 K) already had more than enough support. Janczak turned in the biggest performance of his career, and the Frogs cruised to victory.

Kyle Peterson and Kendall Rogers both observed that TCU seemed like the much looser team than Texas A&M. You have to wonder if the Aggies are a little too keyed up to get their revenge against TCU for last year’s super regional heartbreak. A&M is obviously talented enough to bounce back and win this series, but it will need to relax and just play.

Purple power ruled the day in Lubbock as well as in College Station. East Carolina, a No. 3 seed in the Charlottesville Regional last week, took the first game of its series at No. 5 national seed Texas Tech behind a huge game from catcher Travis Watkins, who hit a grand slam in the fifth to give the Pirates control of the game, then added a two-run shot in the sixth that proved crucial.

Watkins has been on some kind of a roll of late; he also homered twice in the regional last week, highlighted by a walk-off shot to beat defending national champ Virginia. Meanwhile, ECU ace Evan Kruczynski (5.2 IP, 6 H, 3 ER, 5 BB, 6 K) battled through some control issues to turn in a solid start, but the Red Raiders pulled within two runs on Tyler Neslony’s three-run homer in the seventh. But ECU freshman Matt Bridges slammed the door after that, working 2.2 hitless innings of relief and using his sharp slurve to rack up six strikeouts, earning him the save.

Now the Pirates find themselves just one win away from the first CWS trip in program history. They’ll turn to another lefty, Jacob Wolfe, on Saturday, with closer Joe Ingle still fresh in the bullpen.

With ace Nathan Bannister gassed from his two starts in the Lafayette Regional, the Wildcats handed the ball to two-way talent Bobby Dalbec in the first game of the super regional, and Dalbec responded with the best pitching performance of his career. The junior righthander held Mississippi State’s potent offense scoreless on five hits and two walks over 8 2/3 innings and struck out nine. He even endured a 37-minute delay for a power outage in the eighth inning. The Bulldogs got a pair of two-out singles in the ninth, forcing Arizona to call upon lefty Cameron Ming to get the final out against switch-hitter Jake Mangum (who is a force of nature from the left side but merely mortal from the right side). Ming got Mangum to chase a back-foot breaking ball to end the game, preserving Arizona’s 1-0 win.

Dakota Hudson (6.1 IP, 7 H, 1 ER, 1 BB, 6 K) pitched well in a tough-luck loss for Mississippi State, but Arizona got to him for its lone run in the sixth on J.J. Matijevic’s RBI double to left.

Matijevic’s opposite-field double cracks the scoreboard for the Wildcats!

So Arizona is just one win away from Omaha, but closing out the Bulldogs won’t be easy — it feels like MSU will get its bats going at some point this weekend, and Austin Sexton is fully rested and ready for Saturday. Arizona figures to call upon ace Nathan Bannister on four days’ rest (he threw 102 pitches over seven innings on Monday on two days’ rest, after throwing 96 pitches over seven innings last Friday). Will pitching on short rest again catch up with Bannister? Or will Arizona try to steal a game with another pitcher (J.C. Cloney?) Saturday and hold Bannister for a potential rubber game Sunday? Winning Friday gives the Wildcats that luxury. This is just not a deep pitching staff, and the Wildcats have ridden their horses very hard in the postseason. We’ll soon find out how much those horses have left in the tank.