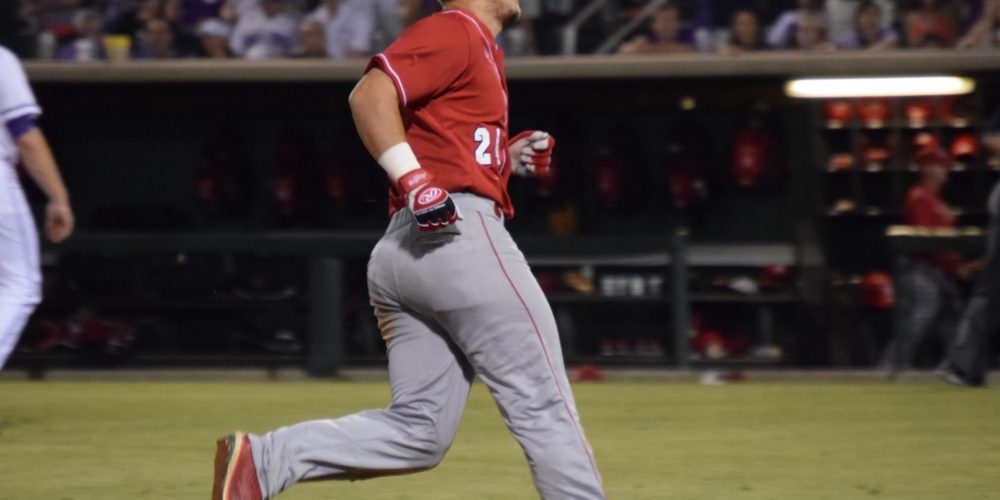 • Rogers: Clarke Schmidt, Gamecocks Impose Their Will On Clemson

UC Santa Barbara has been one of the nation’s hottest teams and most surprising early-season success stories, racing out to an 8-1 start that includes wins against Kentucky, Bryant, San Diego and UCLA in the last week — by a combined score of 47-15. Friday’s game between UCSB ace Shane Bieber (who sparkled in last Friday’s win against Kentucky) and Oregon’s Cole Irvin was one of the day’s more intriguing matchups, but Oregon stopped UCSB’s momentum in its tracks with a lopsided 13-1 blowout. Bieber (6.1 IP, 8 H, 8 R, 7 ER) was hit hard, while Irvin (8 IP, 5 H, 1 R, 0 ER, 1 BB, 6 K) continued his outstanding early-season work to improve to 2-0. The Ducks are now 7-1, although this weekend presents their stiffest test yet in this young season. They certainly aced the first part of that test on Friday.

Oregon State won its seventh straight game in convincing fashion, going on the road and topping San Diego 7-2. Drew Rasmussen (7 IP, 4 H, 1 ER, 2 BB, 7 K) improved to 2-0, and OSU got two-hit games from Cadyn Grenier, K.J. Harrison and Kyle Nobach as part of a balanced 11-hit attack. Oregon State has been playing at a high level against opposition from the Big 12, Big Ten, Pac-12 and WCC during its seven-game winning streak, outscoring its opponents 58-20 in those games. The fourth-ranked Beavers continue to look like the favorite in the Pac-12, although they won’t play a team we projected to make a regional in the preseason until starting conference play at Arizona State on March 18.

The Ducks and Beavers weren’t the only Northwest clubs that made noise Friday. Gonzaga went on the road and knocked off No. 11 TCU 4-3 behind a strong start from Brandon Bailey (7 IP, 6 H, 3 ER, 2 BB, 9 K). The Frogs started previously untouchable freshman sensation Luken Baker (5.1 IP, 5 H, 2 ER), and he was solid in a no-decision, but the Zags came from behind with two runs in the seventh against TCU bullpen stalwart Preston Guillory, highlighted by Taylor Jones’ RBI double. Gonzaga improved to 5-4, and it looks like an intriguing darkhorse in the always-competitive WCC race.

NC State slugger Chance Shepard looked out of sorts in the first weekend at Myrtle Beach. He has been very much in sorts ever since. Shepard set a school record Friday by homering for the sixth straight game in NC State’s 8-1 win against Niagara. His six home runs on the season are just one behind national leader Heath Quinn of Samford. Shepard’s raw power has always been evident, and he’s had his share of big moments during his NC State career — none bigger than the massive game-winning homer to dead-center he hit on a 96 mph fastball from TCU closer Riley Ferrell in regionals last year. But the senior is just a .236 career hitter, as his inability to make consistent contact held him back in the past. He’s still striking out at a high rate (17 strikeouts to just three walks in 41 at-bats), but he’s driving the ball when he makes contact, hitting .317/.364/.829 on the year. His six homers have already equaled last year’s season total.

Meanwhile, the Wolfpack finally got a strong Friday start on the mound for the first time in three tries this year, as lefty Ryan Williamson allowed just one unearned run over 5 2/3 innings while striking out a career-high eight. Niagara (2-9) is hardly the strongest competition, but it’s still a step in the right direction.

No. 12 California has bounced back strong from its season-opening series loss at Duke, winning six of its last seven games, including the first two games of its four-game set at Texas. Ace Daulton Jefferies has been one of the nation’s best pitchers through three weeks, and he shined again Friday, allowing two earned runs on six hits and a walk while striking out seven over seven strong innings of work. Despite giving up his first earned runs of the year, Jefferies improved to 3-0, 0.95 with a 24-4 K-BB mark in 19 innings this year. The Golden Bears have held opponents to three or fewer runs in five of their seven wins this year, and they boast a 2.60 staff ERA. The top two hitters in Cal’s lineup, Aaron Knapp and Mitchell Kranson, had two hits apiece Friday to lead a 10-hit attack against Texas ace Kyle Johnston and the UT bullpen. The Longhorns fell to 5-5 and must now win back-to-back games to salvage a second consecutive four-game split against a Pac-12 foe from the Bay Area.

6. LeClair Classic Offers A Slugfest And A Pitching Duel

Friday’s two games at the Keith LeClair Classic couldn’t have been more different. In the opener, Maryland outslugged Tennessee 10-9, as the red-hot Tennessee offense continued to produce even against first-team preseason All-American Mike Shawaryn (4.1 IP, 4 H, 6 R, 5 ER), but the Maryland offense picked up its ace by pounding out 14 hits. Sophomore infielders Kevin Smith and Andrew Bechtold led the Terps with three hits apiece, and Bechtold added four RBIs. Maryland built an 8-3 lead after four innings, but the Vols kept chipping away at the deficit and put the tying run at third base in the ninth, but Ryan Selmer struck out preseason All-American Nick Senzel to end the game.

The nightcap provided a gem of a pitchers’ duel, as Southeastern Louisiana ace Kyle Cedotal and ECU ace Evan Kruczynski both carried shutouts into the ninth inning. The Lions finally got to Kruczynski (8.1 IP, 5 H, 1 ER, 2 BB, 7 K) for a run in the top of the ninth, but the Pirates answered with two in the bottom of the frame to win 2-1. Immediately after ECU’s Brady Lloyd was thrown out at home trying to score the tying run, ECU freshman Tyler Brown delivered a walk-off two-run single. We expected a competitive weekend in Greenville, and the first day did not disappoint.

Cal State Fullerton has flown a bit under the radar early this season after losing its first series at Stanford, but the Titans have won five of their last six games against a quality schedule to improve to 5-3 overall. On Friday, Fullerton went on the road against a hot Texas Tech club that is coming off a strong weekend at Minute Maid, and the Titans cruised to a 7-3 win. Blake Quinn (5.2 IP, 2 H, 0 R, 3 BB, 10 K) was stellar for Fullerton, which carried a 7-0 lead into the ninth inning. Chris Hudgins and Dalton Blaser had two hits apiece, and Timmy Richards scored two runs and drove in two more to lead the Fullerton offense. Quinn, a transfer from Fresno State, has struck out 19 batters over his last two starts and has entrenched himself as the ace of the staff.

Oklahoma State’s offense hasn’t found its stride yet, but its pitching is keeping it afloat. The Cowboys are hitting just .238 as a team and averaging a paltry four runs per game during their 5-5 start, but the pitching staff has a 2.55 ERA. It seems like only a matter of time before the Cowboys start to hit, because they have the personnel to be a dangerous offense, but for now the arms are plenty good enough to carry the load. A huge key has been the emergence of talented fireballer Thomas Hatch, who has turned in three quality starts for OSU. Hatch threw seven shutout innings Friday against Indiana State, allowing six hits and no walks while striking out five in a no-decision. Sycamores ace Austin Conway limited OSU to two hits over five shutout innings, but Oklahoma State finally pushed across a run in the eighth to win 1-0. Oklahoma State has allowed just three runs combined in its last three games. We loved the depth of OSU’s staff heading into the season, but the staff lacked a clearcut No. 1 starter atop the rotation. Hatch appears to be seizing that role.

Baylor and Houston are going in opposite directions. The unheralded Bears have won five straight games since starting the season 1-3, as they bludgeoned Stony Brook in a three-game sweep last weekend and then dispatched Sam Houston State 5-1 midweek. Houston has lost five straight since starting the season 4-0. On Friday, the Bears beat the Cougars 4-2 behind a second straight strong outing from ace Daniel Castano (7 IP, 5 H, 0 R, 2 BB, 6 K). Houston’s Andrew Lantrip (7 IP, 5 H, 2 ER, 0 BB, 7 K) pitched well in defeat, but the Cougars couldn’t get anything going against Castano, and the opportunistic Baylor offense made the most of its five hits in the game. If the Bears can win one more game to take the series this weekend, they’ll put themselves squarely on the national radar. The Cougars, meanwhile, need to find some answers on offense — they’ve scored three or fewer runs in each of their last five games.

New Mexico made some waves last weekend by scoring 33 runs in a three-game sweep of Wichita State. The Lobos welcomed another Missouri Valley Conference contender to Albuquerque on Friday, but this time the result was different. Dallas Baptist got outstanding pitching from Colin Poche (5 IP, 5 H, 2 ER, 1 BB, 5 K) and Jordan Martinson (4 IP, 1 H, 0 R) in a 5-2 win against Carson Schneider (7.1 IP, 8 H, 4 R, 3 ER) and New Mexico. Camden Duzenack, Darick Hall and Daniel Sweet had two hits apiece to lead DBU’s balanced 10-hit attack. The Patriots opened eyes early in the season by sweeping Iowa, then took a step back with a midweek loss at Rice and a series loss to Oral Roberts. But shutting down the Lobos in Albuquerque is no small task. We’ll see if the Patriots can do it again Saturday.