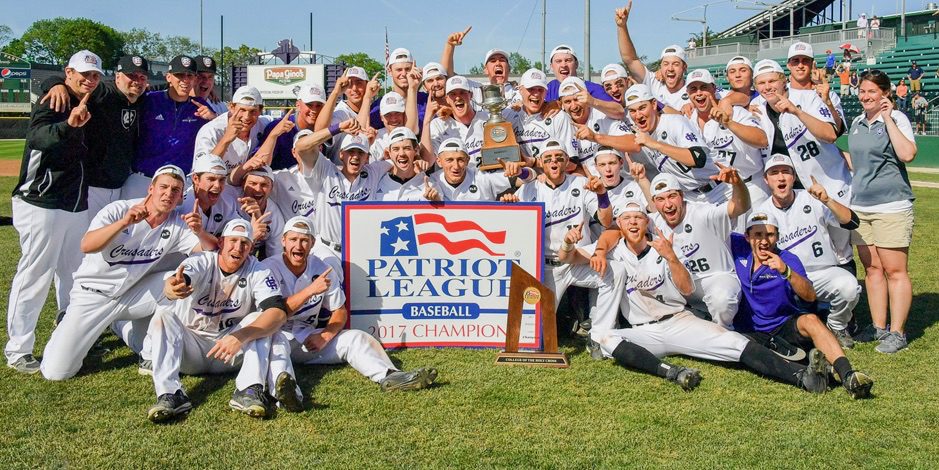 When Holy Cross won the Patriot League tournament and earned its spot in what will be its first NCAA regional in 39 years, the Crusaders did so with a roster full of players who spent their formative years crashing their opponents into the boards in hockey or slamming them to the turf in football.

DiCenzo said the Holy Cross freshmen who arrived on campus in the fall of 2013 were “like a band of misfit toys” – players who could do one or two things really well but needed Crusaders coaches to develop the rest of their games.

Crusaders players are not at all offended by that characterization.

“We didn’t fit in anywhere else,” said senior closer George Capen, “but we fit in here.”

First baseman Anthony Critelli, another one of the 13 seniors on the roster – all of whom arrived in the fall of 2013 – is a perfect example of a proverbial piece that didn’t quite fit when he signed.

A New Jersey native who played quarterback and cornerback at Christian Brothers Academy, Critelli arrived at Holy Cross as a hitter – defensive position to be determined.

He was a 6-foot-4, 190-pound shortstop in high school, played third base as a Holy Cross freshman but then settled in at first base, a position he had never previously played.

“(DiCenzo) is able to see our talent before it’s there,” said Critelli, who has filled out to 220 pounds and was recently named a first-team All-Patriot League player for the third year in a row. “He turns us into the best players we can be.”

These are serious students.

Of the 13 seniors on the roster, including one player who has a double major, there are four focused on Economics, four on Mathematics, three on Psychology, two on Political Science and one in Computer Science.

Senior Joe Cravero, who is Holy Cross’ No. 2 starter, checked all the boxes for the Crusaders. He was a high school hockey forward who scored 20 goals as a senior, he was a pitcher with potential and an excellent student.

Cravero, who has a 3.39 grade-point average and was the lone Crusaders player to make the Patriot League’s All-Academic team this year, knows exactly the type of player DiCenzo wants.

“Baseball is more mental than football or hockey, but (DiCenzo) is always looking for the type of player who wants the ball to be hit to him when the game is on the line,” said Cravero, who turned down Ivy League offers to come to Holy Cross.

“He wants guys who will stick their noses in the ground.”

The Crusaders have no shortage of that quality, especially among their senior class. It’s a group so loaded in leaders that DiCenzo for the first time went without captains.

Anyone who wanted to lead was encouraged to do so.

Many of the Crusaders have accepted the challenge of leading, including seniors starters such as catcher Alex Voitik, Critelli at first base, left fielder Bill Schlich, right fielder Josh Hassell, top-two starters Brendan King and Cravero and closer Capen.

Critelli, King, Capen and senior pitcher Jon Escobar all played in the Cape Cod League last summer, an impressive accomplishment for the Crusaders.

King, meanwhile, said you have to be tough to play baseball at Holy Cross, especially in February when the team has been known to practice outdoors in 20-degree temperatures.

Snow is shoveled off a football field, and practice is on.

“The unwritten rule is that you don’t complain about it,” King said. “It’s only cold if you want it to be.”

Many of these seniors have been contributing since their freshman years – they won twice at Mississippi State twice that season – and the Crusaders have progressed in each of the past three campaigns.

After not making the Patriot League playoffs in 2014, the Crusaders reached the semifinals in 2015 and the finals in 2016 before finally winning the conference tournament for the first time in program history this year.

Capen finished all four Holy Cross games in the Patriot League playoffs, racking two wins and one save. King earned the other two wins as the Crusaders (23-25) went 4-0, winning two one-run games and another that went extra innings.

The finale was an 11-7 win over Bucknell that took 11 innings. Holy Cross was ahead by three runs and within one strike of winning the game in the ninth inning when it blew the lead.

Not to worry, DiCenzo said.

“This is the most resilient group of guys I’ve had in my 19 years of coaching,” he said. “If they are down, they expect to come back.

“They are tenacious, and it’s great to see them get rewarded.”

Once Capen got a strikeout in the bottom of the 11th to win the game, the Crusaders got their reward for sure. Capen “chucked” his glove as high as he could before getting tackled by his catcher, Voitik.

“I couldn’t breathe at the bottom of that pile,” Capen said. “But the emotions were that much sweeter knowing that (winning the Patriot League) had never been done (by Holy Cross) before.”

After the dogpile on the field, the postgame celebration continued down the left-field line, in the picnic area.

The players and coaches shared their joy with family members, friends, fans and alumni.

“The guys who had played for Holy Cross in past years were just as happy for us,” Capen said. “This was a win for everyone, not just the 32 guys on the roster.”

It was a fitting end to the home careers for those 13 seniors, especially Cravero, who allowed a walk-off homer to Navy in last year’s Patriot League finals.

It was also special for the players’ families.

“A lot of the parents have been here with us every weekend for the past four years,” Cravero said. “They have been almost as passionate about the team as we have.”

In the end, the “misfit toys” have finally found their place in college baseball – the 2017 NCAA regionals.

“This is a team,” Capen said, “made up of guys who slid under the radar of the bigger schools.”

〈
Previous Article Field Of 64: The Road To Quahog
Next Article Day One At Stanford: Domination
〉