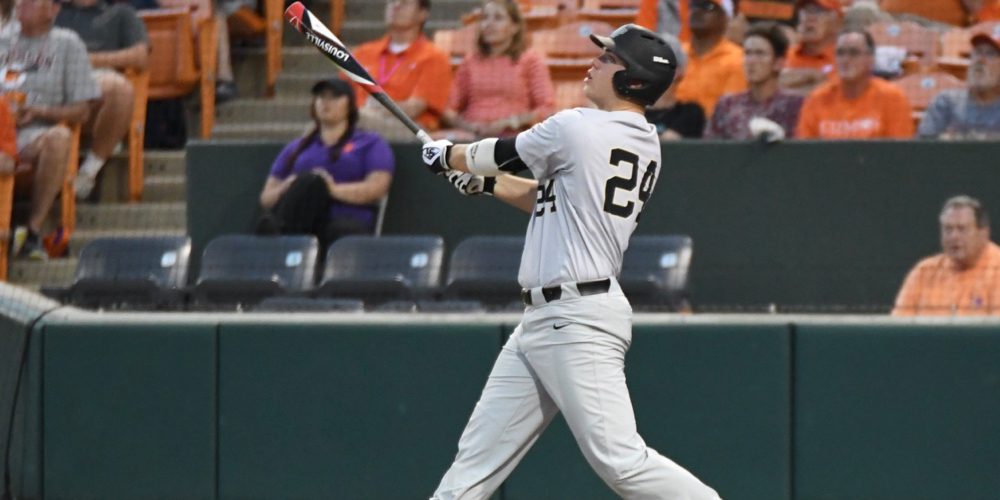 CLEMSON, S.C. — After blowing a two-run ninth-inning lead in Friday night’s exciting series opener, Wake Forest knew it needed to show some resilience in Saturday’s doubleheader. And eventually, it did. But not until after Clemson clinched the series with a lopsided 11-0 win in Saturday’s first game behind a complete-game shutout from Alex Eubanks (more on him tomorrow).

The Deacs were in danger of getting swept after falling behind 2-0 through five innings in the nightcap, but they surged ahead with six runs in the seventh and salvaged the series finale with an 8-3 victory. The big blow in that fateful seventh was a grand slam by junior first baseman Gavin Sheets.

This was a hard-fought series between two very good offensive clubs that both have real chances to host regionals, and the home team held serve by taking two of three, but the visiting Deacs showed character by avoiding the sweep.

Wake Forest has a lot of really good hitters, and several of them had strong weekends — including the dynamic Fairchild, a preseason All-American who is well on his way to earning postseason All-America honors as well. But the big hero Sunday was Sheets, so let’s focus on him.

Wake Forest coach Tom Walter always thought Sheets had a chance to grow into what he’s become — one of college baseball’s premier power hitters. For Walter, recruiting Sheets was a no-brainer. He has big league bloodlines — his father Larry was a power hitter who spent parts of seven seasons in the majors with the Orioles and Tigers, highlighted by a 31-homer campaign in 1987. And Gavin also had big league size — he’s currently listed at 6-foot-5, 235 pounds. It was only a matter of time before he unlocked his huge lefthanded power potential.