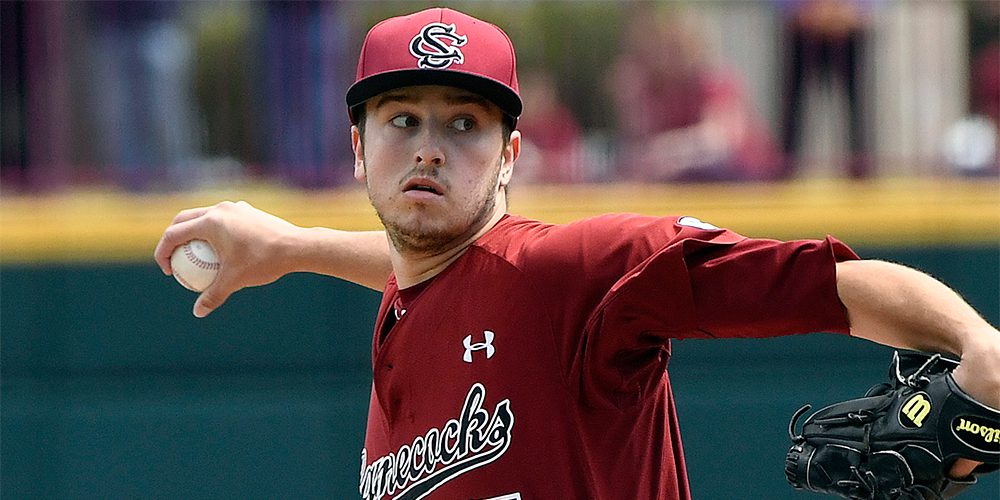 HOOVER, Ala. — South Carolina may or may not be in the NCAA postseason next week, but it’s impossible to say this team doesn’t play with a lot of heart. After all, they’re putting themselves right back in the thick of the at-large bid discussion with a strong showing at the SEC tournament this week.

For much of Friday afternoon’s elimination contest against Kentucky, it simply didn’t look like it was going to be the Gamecocks’ day. Fiery Kentucky sophomore righthander Justin Lewis was in a zone and the Wildcats were spotted a 1-0 lead over Adam Hill and the Gamecocks after scoring on an RBI groundout in the first inning.

Honestly, with the way the Wildcats were pitching much of the afternoon, one run seemed like enough. However, UK was unable to get Lewis to go the distance and were forced to turn the game over to the bullpen, notably stud closer Logan Salow.

Salow ran into a team playing on life support, but certainly not willing to give in … not just yet.

Down 1-0, South Carolina began the seventh inning with an Alex Destino walk, and moved him to second base via a sacrifice bunt from Jonah Bride. Then, Jacob Olsen reached base via an error at third base. That brought up pinch-hitter T.J. Hopkins, who replaced Hunter Taylor. Hopkins, who texted South Carolina coach Chad Holbrook Thursday night and told him he was ready to make an impact, worked an advantageous 2-0 count from Salow before getting a pitch he could drive and sending it over the fence in left-field for a three-run home run.

That home run proved to be the difference, as Reed Scott put out a fire with two outs in the eighth inning and flame-throwing righthander Tyler Johnson closed out the contest in style.

“We’ve had some tough moments. But what I’m proud of is that we’ve played some good baseball here. We’ve stayed together and have continued to have a great attitude. It’s neat to see them playing [like this] this week, we were a hurting group after last week,” South Carolina head coach Chad Holbrook said. “We knew the opportunities that we had that we let slip through. To see them come back and show resolve and put themselves back in position. It’s very meaningful to me.

“Now, we’re in the conversation,” Holbrook continued, when asked about the big win. “There are a lot of things in our favor when you look at our resume. If injuries are taken into account, such as not having our best guy [Tyler Johnson] for five or six series, I think we’re one of the better at-large teams in the country. I don’t think anyone would welcome seeing us in their regional.”