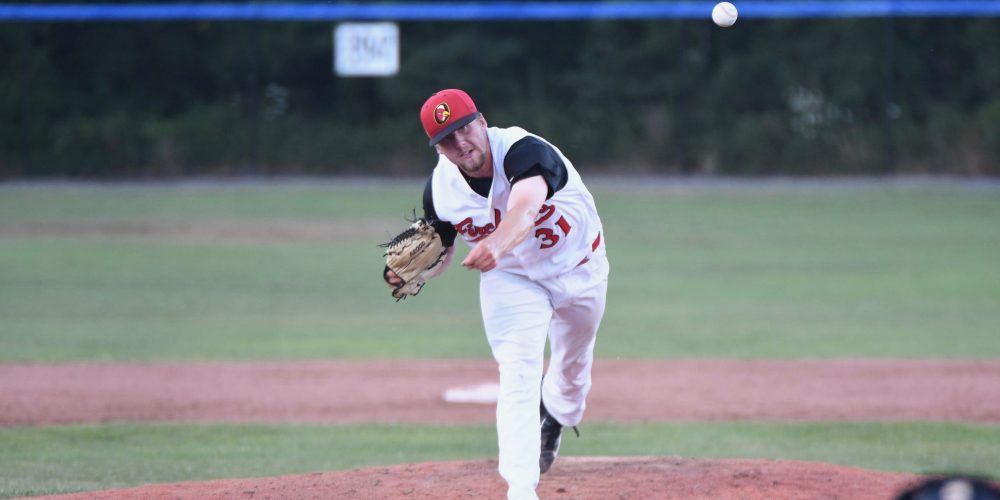 Now that we’ve ranked the Cape Cod League’s top 40 hitting and top 40 pitching prospects for the 2019 draft, it’s time to see how the league’s prospects line up by position, combining 2019 and 2020 draft-eligible players. We’ll start with scouting reports on the Cape’s top 15 lefthanded pitching prospects.

Imposing 6-foot-5, 260 pound lefty with an easy 93-96 mph fastball and a plus breaking 84-85 mph slider. Upon the first look this summer neither pitch played plus due to the lack of control. His rotational, cross-body delivery was out of sync as he scattered pitches in and out of the zone. Yet, he did it easy with a still head while also hiding the ball for some deception. Overall, he did not show the control that he did during the 2018 season when he walked just 2.67 batters/9 IP. However, Stinson showed why multiple looks on different days at prospects are so important for clubs and evaluators. During a second appearance, his slider showed the quality and command that would have gotten MLB hitters out. It was plus-plus, and he used it as the putaway pitch on all seven of his strikeouts over 2.1 innings of work. The depth was the separating quality between a plus pitch and a plus-plus pitch that he continuously repeated while striking out the first five Chinese Taipei hitters. He struck all of them out on filthy, late breaking sliders. To keep hitters honest he mixed in a low-to-mid-90s (up to 96) fastball. His delivery was much more in sync and he showed many more signs of a potential future starting pitcher. His outing was, by far, the most dominant of any USA Collegiate National Team arm during my five days of coverage. Regardless of his use by the CNT as a reliever this summer and by Duke next spring, Stinson likely will be given every opportunity to start in pro baseball. He has the size and the stuff, and on this day, he showed the command to be an early Day One selection for the 2019 draft.