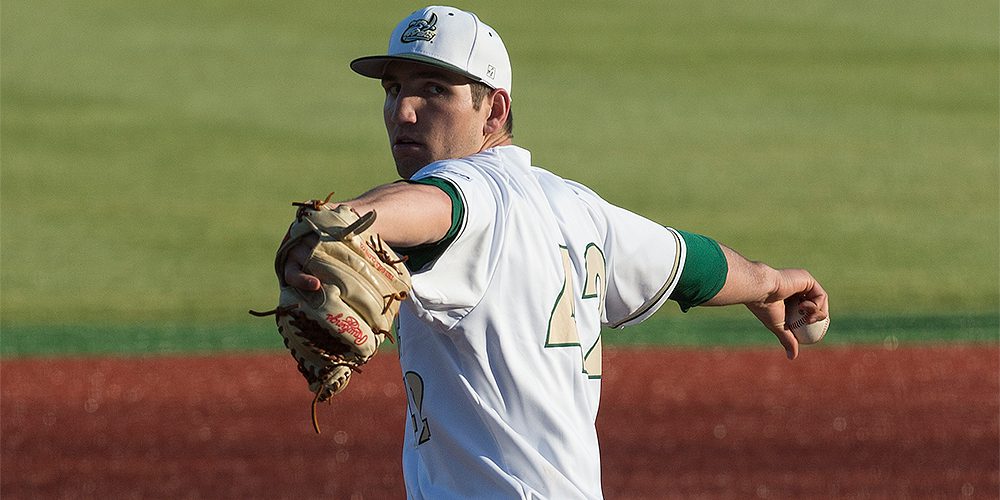 Team of the Day: UC Irvine

The Anteaters sure seem to be heating up as they notched a fifth-straight victory with a dominant 11-2 triumph over top-ranked TCU. UCI touched up TCU starting pitcher Brian Howard for eight runs in the first inning and cruised the rest of the way. Howard recorded just one out in his start. Meanwhile, for the Anteaters, All-American Keston Hiura hit a home run and a double and had two RBIs, while Cole Kreuter had three hits (one a double) and three RBIs. Irvine starting pitcher Louis Raymond had a quality start, allowing two runs on three hits in 6.2 innings. 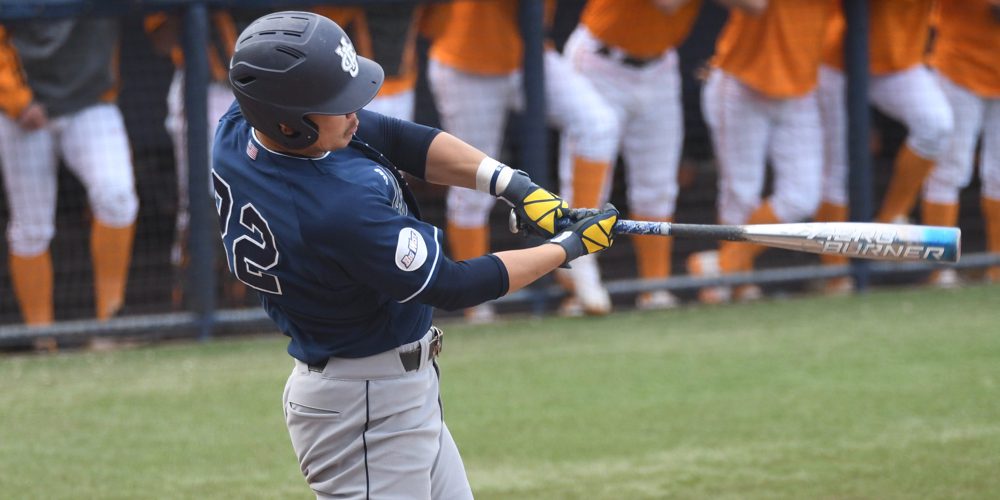 Upset of the Day: Boston College over No. 3 Florida State

Fresh off a super regional appearance last season, the Eagles have gotten off to a slow start this spring. However, perhaps an 8-5 win over Florida State to begin ACC play will get them headed the right direction. BC scored five runs in the third inning to set the tone in Friday night’s affair. BC was led at the plate by Michael Strem and Mitch Bigras, who each collected two hits and knocked in a pair of runs. Jacob Stevens put together a gritty start despite some command issues at times. He walked five, struck out five and allowed two runs on four hits in six innings. Meanwhile, FSU struggled on the bump with starting pitcher Cole Sands allowing five runs on eight hits in six innings.

McKay is one of the premier overall players and pitchers in college baseball, and he showed that once again on Friday afternoon as the Cardinals beat Pittsburg 3-0 to begin ACC play. McKay was the headliner, striking out 15, walking just one and allowing two hits in seven shutout innings. From our Frankie Piliere, McKay sat 90-93 and up to 94 mph with his fastball, while also showing excellent feel for a plus changeup. 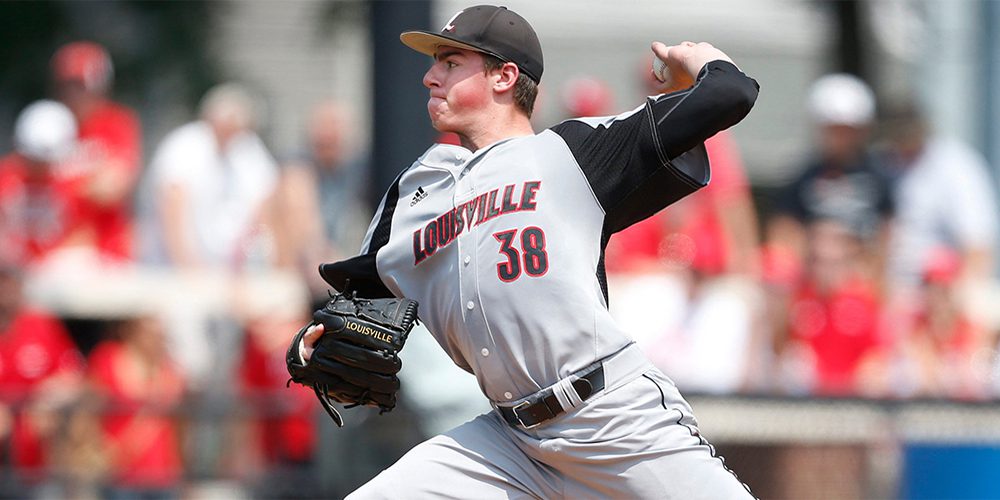 Oregon LHP David Peterson: After putting together a sensational outing last weekend, the talented lefthander was back to business on Friday in a 2-1 win over Santa Clara. He struck out 14, walked one and allowed three hits in 7.1 innings. Peterson has now accumulated 31 strikeouts in his last two starts.

Charlotte: There have been a lot of surprises in college baseball so far this season, but we’re not sure how many people thought the 49ers would be 10-4 at this point after pitching a shutout in a 2-0 win over No. 18 East Carolina on the road. Charlotte righthander Colton Laws laid down the law on the Pirates, striking out nine, walking just one and allowing three hits in 7.1 shutout innings. Meanwhile, Brett Netzer led the offensive charge with a pair of hits and an RBI.

Gonzaga RHP Eli Morgan: How about this start from the Gonzaga righty? Morgan struck out 15, walked one and allowed two hits in a complete game shutout and 1-0 win over Cal State Fullerton. Speaking of the Titans, righty Connor Seabold also had a studly performance, striking out 11, walking two and allowing a run on four hits in a complete game.

UL Lafayette LHP Gunner Leger: The junior lefty has had a wonderful career and almost notched a no-hitter in a 10-0 win over Saint Peter’s. Leger carried a no-hitter into the ninth inning and recorded the first two outs before allowing a blooper that ended the no-hit bid. Still, what a performance, as he struck out nine in 8.2 innings.

Baylor: Boy, are the Bears hot right now. BU improved to 13-1 with a hard-fought 2-1 win over Houston. BU righthander Nick Lewis put together yet another solid start despite battling some command issues. He allowed a run on four hits in 6.2 innings. Meanwhile, UH All-American lefthander Seth Romero struck out 11, walked four and allowed two runs on four hits in 6.1 innings.

Georgia Southern RHP Brian Eichhorn: The Eagles hit the road and picked up a 7-0 shutout win over Elon with Eichhorn leading the way. He struck out 12, walked just three and allowed two hits in seven shutout innings. His ERA for the season is now down to 2.12.

Missouri: You want to talk about surprises — how about the Tigers? Goodness gracious, this team is now 14-1 after a 4-0 win over Appalachian State. Junior righthander Tanner Houck put together a strong performance, striking out seven, walking two and allowing four hits in 8.2 shutout innings. Meanwhile, Kameron Misner led the charge at the plate with a pair of hits and two RBIs.

Mississippi State LHP Konnor Pilkington: South Alabama has one of the better offenses in college baseball and the talented lefty had his way with the Jaguars on Friday night. Pilkington struck out 13, walked two and allowed just four hits in 7.2 innings.

Butler LHP Jeff Schank: The Bulldogs improved to 8-6 overall with a 2-0 win over Fort Wayne. The story of the game, though, was the performance by Schank, who struck out 11, walked two and allowed four hits in a complete game shutout.

Southeastern Louisiana RHP Mac Sceroler: The Lions are back to their winning ways since that midweek trip to Vanderbilt and Sceroler led the way in a 8-0 road win over New Orleans. He struck out 11, walked two and allowed just four hits in eight shutout innings. Sceroler now has a 2.08 ERA in 26 innings, along with 37 strikeouts and five walks.

Ole Miss LHP David Parkinson: After not looking too hot last weekend at the Shriners College Classic, Parkinson was very good in a 2-0 win over Furman. The lefty struck out nine, didn’t walk anyone and allowed just one hit in eight shutout innings. Meanwhile, premier prospect and Furman starting pitcher Will Gaddis had a solid outing, striking out six, walking two and allowing two runs – one earned — on six hits in seven innings.

Arkansas RHP Trevor Stephan: The Hogs swept a doubleheader from Rhode Island on Friday and Stephan was terrific in the nightcap, striking out 13, not allowing a walk and allowing just two runs on two hits in 8.1 innings. He had his typical stuff with a fastball into the mid 90s.

Rice RHP Matt Canterino: We’ve written about Canterino already this season, but he was put in quite the spot going into Friday’s game against Stanford. Rice looked atrocious in the series opener against the Cardinal, but bounced back in impressive fashion with a 4-0 win on Friday. The talented freshman righty was the key, striking out 10, walking one and allowing two hits in seven shutout innings. Perhaps that’s the spark that will get Rice going.

Dallas Baptist: In one of the more underrated series of the weekend, the Patriots led off the weekend with a nice 9-7 triumph over Oral Roberts. Freshman Ray Gaither got the start on the mound and allowed a run and a hit in five innings, while offensively, leadoff hitter Jameson Hannah went 3-for-6 with a home run, two runs scored and three RBIs. Matt Duce also had three hits, while Austin Listi and Devlin Granberg each had two hits and two RBIs.

UCF 1B Rylan Thomas: How about the day he had at the plate in a 21-1 win over Central Michigan? Thomas went 3-for-3 with a pair of homers and seven RBIs to lead the Knights to a 19-hit barrage against the Chippewas.

Oklahoma’s Starting Pitching: The Sooners have played an impressive brand of baseball this season and didn’t allow a run in a doubleheader against Buffalo. In the second game, an 11-0 win, Devon Perez struck out nine and allowed just four hits in six shutout innings, while in a 1-0 win, Austin Hansen struck out three and allowed just two hits in seven shutout frames. OU is now 16-2.

Maryland: Are the Terps ready to scurry back into the national picture? They sure seem like it, as they notched their sixth-straight victory in a 7-1 win over Bryant. Maryland starting pitcher Brian Shaffer struck out eight, walked one and allowed just five hits in seven innings. Meanwhile, Andrew Miller was nails out of the pen with two shutout innings and five strikeouts.

UC Santa Barbara: The Gauchos, at least on paper, returned just enough to make more noise this spring. However, some things will need to change soon for that to happen. UCSB dropped both ends of a doubleheader to BYU, getting outscored 24-9 in the setbacks — 7-6 and 17-3. In the first game, Kyle Nelson allowed six runs on eight hits in 4.1 innings, while in the second, somehow Chris Clements allowed 13 runs on 13 hits in three innings as the starting pitcher. UCSB is now 5-9 after another setback.

Oklahoma State: The Cowboys scuffled offensively in a tough 2-1 loss to South Dakota State. SDSU lefthander Brady Stover struck out six and allowed just a run on three hits in five innings, while the Jackrabbits’ bullpen did a masterful job. OSU wasted a solid start from Tyler Buffett, who struck out seven, walked one and allowed one earned run on six hits in 6.1 innings.

Georgia: You have to wonder what’s going on in Athens, Ga., these days. Scott Stricklin’s Bulldogs dropped an ugly 11-4 contest at home to Rider. And how about this? Georgia lefthander Kevin Smith allowed six runs on five hits without recording an out in his start. Meanwhile, Rider’s Harrison McClure had a huge night at the plate, going 4-for-5 with a home run and three RBIs.

Indiana: The Hoosiers entered the season with some serious promise, but they’re having an issue finding their footing thus far, dropping to 4-7 with a 5-3 home loss to Middle Tennessee State. IU’s Tim Herrin allowed four runs on six hits in 3.2 innings, while MTSU’s Jake Wyrick put together a strong start, striking out 11, walking just one and allowing just two runs on four hits in seven innings.

We’ve talked about LSU outfielder Greg Deichmann and his raw power a lot in the past. Well, he put that on display Friday night in LSU’s win over Wichita State. Check this out …