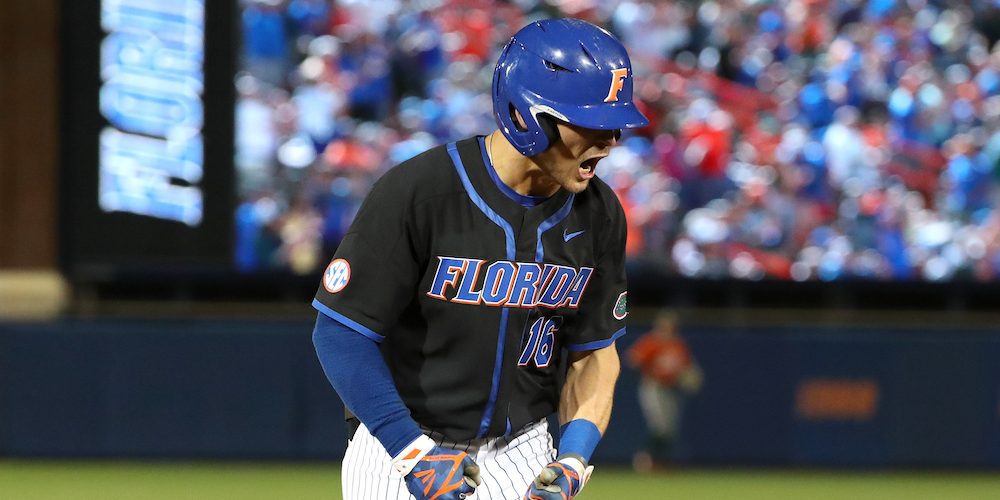 1. UCLA bounces back against Georgia Tech

The Bruins were left standing in the field in the series opener on Friday as Georgia Tech’s Kyle McCann hit a walk-off home run to take them down. But John Savage’s club turned their fortunes around and left zero doubt in an 8-2 victory to even the series on Saturday.

UCLA righthander Jack Ralston put together another successful performance, striking out four and allowing two runs on four hits in five innings, while the Bruins bullpen rose to the occasion. Jack Filby struck out two in a pair of shutout innings, Nathan Hadley tossed a shutout innings and closer Holden Powell struck out a batter in a scoreless frame to end the game. The big story line for the Bruins is that for the second-straight week, Ralston stepped up in Ryan Garcia’s absence.

UCLA’s win sets the stage for a terrific series finale on Sunday.

Freshman CF Matt McClain gets into this one for a HR to left center making it 6-1 @UCLABaseball top 3 pic.twitter.com/R6L06t2jf4

2. What’s in that Tennessee water?

It’s been a long time since the Volunteers were relevant on the national stage, but that could be changing this season — at least if the first two weekends are any indication.

It was one thing for the Volunteers to silence Appalachian State last weekend and Northern Kentucky in midweek action. But the Vols faced their toughest test this weekend against Indiana, or so we thought.

The Hoosiers are a solid club, and just like App and NKU, the Vols have made easy work of them this weekend, winning the series opener 5-1 before crushing them 11-0 to clinch an important series victory.

Evan Russell led UT’s offense with a pair of hits, while Ricky Martinez and Jake Rucker each had two hits to lead the way.

For the season, the Vols have now scored 45 runs … the opponents? Just one. What a start for Vitello’s club.

3. Illinois. The team to beat in the Big Ten?

Though Nick Faleris and Burke Granger did the Big Ten preview for us, I also put together my own Big Ten projected standings. It wasn’t easy. The top of the league was pretty much equal, and now, with Minnesota and Indiana both showing chinks in the armor early this season, Illinois looks like the team to beat outside of Michigan.

The Fighting Illini, who caught everyone’s attention last weekend by going 3-0, along with a win over Wake Forest, are red-hot again this weekend with a pair of wins over Florida Atlantic to clinch a road series win. The Illini beat the Owls 5-3 to improve to 5-0 for the first time since 2015.

Illinois starting pitcher Andy Fisher put together a strong start in the win, striking out nine, walking three and allowing just a run and two hits in six innings, while the bullpen performed admirably as well with Ty Weber striking out two in an inning of work. Meanwhile, Zac Taylor had a double and went 3-for-5 with an RBI, while Michael Michalak and Michael Massey also had productive days with three hits each.

“We did a great job of putting pressure on them all game,” said head coach Dan Hartleb. “We couldn’t bury them, but that’s what happens when you play a good team. I was really pleased with the progress we made from last night.”

“(Fisher) did a great job,” said Hartleb. “He pounded the zone, was down in the zone a lot. He’s got some toughness and our defense did a good job behind him.”

We’ve got our eye on you, Illini.

After Friday’s series-opening loss to the Hurricanes, Florida coach Kevin O’Sullivan said he couldn’t understand why his team was pressing. It was early and everyone should be having fun at this stage in the season. Well, those words appeared to fall on deaf ears through the first six innings of Saturday’s contest, as Miami carried a 3-1 lead into the bottom of the seventh, smelling a series victory over O’Sullivan’s club.

Miami lifted starting pitcher and righthander Chris McMahon, who tossed a gem, in the inning, and the Gators pounced. Miami began the inning with a pair of quick outs, but after Brady Smith walked, the ‘Canes went with a reliever in McMahon’s place. That proved to be a tough decision.

Florida’s Wil Dalton cleared the bases with a triple to give his team a 4-3 lead, while Kendrick Calilao added to the heartache for Miami with an RBI double to extend the lead to 5-3.

The Gators scored four more runs in the eighth to put the game out of reach and secure an impressive 9-3 victory. In the eighth, Brady McConnell, who has had a solid series at the plate, brought in two runs with a single, while Calilao, again, came through with an RBI single.

Today’s result sets the stage for a terrific finale.

This 3-run triple put the #Gators on top!

Rain has caused issues in the Carolinas this weekend, but the Pirates and Burleson finally got to play a doubleheader against Monmouth Saturday afternoon.

ECU took the series opener 3-1 before crushing the Hawks, 10-0, in the nightcap. Today belonged to ECU two-way star Alec Burleson, who had an afternoon to remember.

In the opener, Burleson struck out 10, walked three and allowed a run and five hits in seven innings, while also helping his own case at the plate with a 3-for-3 performance, which included a double.

In the nightcap, Burleson went 3-for-4 with a pair of doubles, a run scored and two RBIs to help the Pirates earn a convincing victory.

Burleson is now hitting .682 with three doubles, a home run and eight RBIs, along with a .955 slugging percentage, while on the mound, he’s now allowed just three runs in 12 innings.

HAVE A DAY ALEC BURLESON!

1. A good day for the American Athletic Conference

A couple of teams in the American pulled off notable wins Saturday, in addition to UCF’s victory against Auburn (which our Kendall Rogers covered elsewhere):

• Houston clinched its big series against Arizona with a 9-7 victory, a day after winning a 2-1 pitchers’ duel. This time, Houston’s offense carried the load, as the Cougars drew nine walks and rapped out 10 hits. Jared Triolo led the way with two hits and three RBIs. This should prove to be a very nice series win for the Cougars, because we expect Arizona to make some noise in the Pac-12.

• Tulane slugged its way past Ole Miss, 13-12, to even the series. This was a wild back-and-forth affair that was capped off by David Bedgood’s goodnight homer — a pinch-hit, two-run walk-off shot in the bottom of the ninth. Kobi Owen went deep twice and drove in five runs for the Green Wave, which has ridden a potent offense to a 6-1 start.

The Mountain West feels wide open this year, with San Diego State, Nevada, Fresno State, New Mexico and UNLV all looking like bona fide contenders. Fresno has made a bit of a splash already this weekend, beating Kansas State and Cal State Fullerton to start 2-0 at the Tony Gwynn Legacy tournament in San Diego. The Bulldogs got three hits (including a triple) from leadoff man Zach Ashford, two hits and two RBIs from cleanup man McCarthy Tatum, and five strong innings from Nikoh Mitchell in a 5-2 win over the Titans on Saturday. Things got hairy in the ninth, but Jaime Arias inherited a bases-loaded, no-outs jam and proceeded to strike out the side to save Fresno’s bacon.

UNLV opened the season with a series win over Seattle, then split a two-game midweek set with UC Santa Barbara before traveling to Stanford this weekend. The Rebels got off to a strong start in the series opener Saturday, winning the first game of a doubleheader 2-1, as Cameron Jabara (7 IP, 5 H, 1 R, 0 ER, 3 BB, 3 K) outdueled Cardinal ace Brendan Beck (6 IP, 6 H, 2 ER, 1 BB, 5 K). UNLV coach Stan Stolte told D1Baseball this week that Jabara has come on strong as the rotation anchor.

“With [UNLV pitching coach] Greg Maddux working with him, he’s really picked up how to pitch, because he’s got movement and he’s got offspeed,” Stolte said. “And he’s sharp, he’s smart. He’s pitching now instead of throwing. He’s got good movement and he’s a good athlete.”

UNLV pitched well in the nightcap too but fell 3-2 on Christian Robinson’s walk-off double in the ninth.

3. Upset of the Day: Quinnipiac over Wake Forest

The 20th-ranked Demon Deacons haven’t gotten off to a great start. After getting blown out by Liberty 9-3 on Tuesday, Wake was knocked off by Quinnipiac 8-6 on Saturday, dropping the Deacs to 2-3 on the young season. Wake ace Morgan McSweeney failed to get out of the first inning, allowing four runs on six hits and a walk in just two-thirds of an inning, as the Bobcats put up a four-spot. Six Bobcats recorded multi-hit games as part of a balanced 15-hit attack in support of Tyler Poulin (6.1 IP, 5 H, 4 ER, 2 BB, 12 K). Wake faces Quinnipiac again on Sunday, then takes on Elon later in the day and again on Monday. Time to see if the Deacs can mount an early rally before they dig themselves into a hole.

Texas Tech has opened its season with a pair of nice tests against Oregon and Kentucky, both of whom have regional-caliber talent. After taking two of three from the Ducks last weekend, the Red Raiders have taken the first two games of their series against the Wildcats. The offense did the heavy lifting in Saturday’s 10-7 win, as TTU responded to Kentucky’s four-run fifth with six runs in the bottom of the frame and never looked back. The highlight of that rally was a grand slam by the talented Dylan Neuse, one of Tech’s most important newcomers this spring. Another newcomers, freshman shortstop Dru Baker, went 3-for-5 with a pair of runs in the 3-hole. Tech’s pitching has been a bit shaky in the early going, but its big bats have picked up the slack.

Speaking of big bats carrying the load, Oklahoma State’s offense erupted in a 17-5 win against Horizon favorite Wright State, clinching the series for the Cowboys, who are now 5-1. Carson McCusker and Huey Morrill had four hits apiece, and four different Cowboys homered (McCusker, Andrew Navigato, Christian Funk and Alix Garcia) as part of a 20-hit barrage. The long ball figures to be a staple of Oklahoma State’s offense once again this year, and OSU’s team power loomed large on this day.

No. 21 Coastal Carolina improved to 7-0 with a good 8-2 win against MAC favorite Kent State. Sophomore outfielder Parker Chavers remained hot for Coastal, stroking a three-run homer and driving in four runs on the day — he’s a dynamic player on the verge of a huge year. And talented lefthander Anthony Veneziano turned in his second straight solid start, allowing just two runs in five innings. Veneziano is a major key for Coastal, so his early success is a good sign for this team’s future. Relievers Alaska Abney and Trevor Damron held Kent State scoreless the rest of the way.