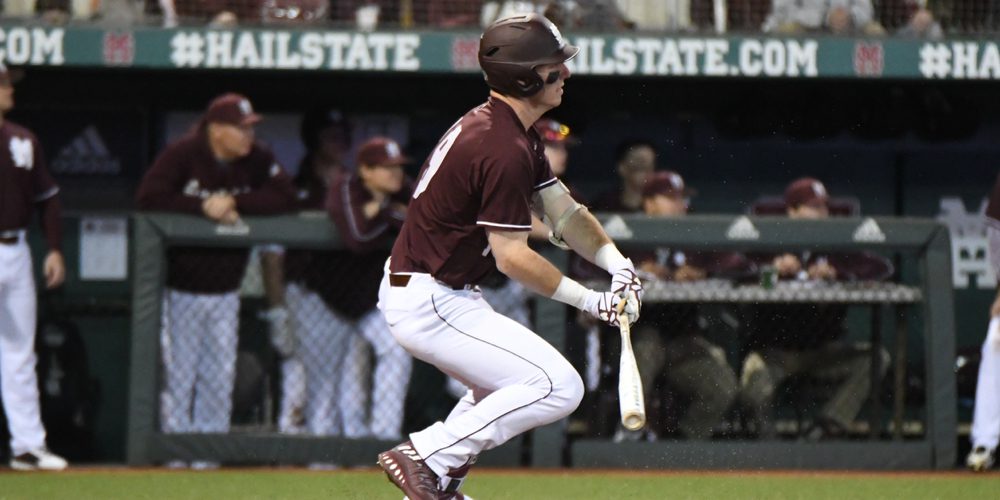 We’ve chronicled the Gators success against the Hurricanes in the past, and that trend continued Saturday afternoon in UF’s 2-0 win over Miami to take the series. UF sophomore righthander Brady Singer, who was up to 97 last weekend, was electric yet again, striking out 11, walking three and allowing just five hits in 7.2 shutout innings. Meanwhile, the ‘Canes wasted a quality start from junior college transfer Jeb Bargfeldt, who allowed just two runs in six innings. The good news for Miami? The pitching staff has been a bright spot this weekend. The bad news? The Hurricanes are still looking for their first run in the series entering the finale.

After the series opener against Sam Houston State on Friday, we spoke with Cajuns head coach Tony Robichaux about impressive-looking freshman Todd Lott. He felt like Lott was close to turning the corner after adding an insurance run in that game. Well, Lott turned that hit into a grand performance on Saturday in a 6-1 series-clinching win over the Bearkats. Lott went 4-for-5 with a two-run single, a home run and three RBIs. Meanwhile, ULL got another solid pitching performance, this time from sophomore righthander Nick Lee, who struck out eight, walked one and allowed just a run on five hits in seven innings. After looking rather iffy last weekend, this series was a step forward for the Cajuns.

Tigers head coach Paul Mainieri would gladly admit it at this point, but his team’s greatest recruiting victory last summer was getting the veteran lefthander to come back to LSU for another season. The senior has started his final campaign in brilliant fashion. Last week, he tossed a seven-inning no-hitter in a win over Army. That trend continued Saturday night in a dominant 14-0 win over Maryland, as Poche didn’t allow a hit until the first batter of the ninth inning. He struck out six and walked two and allowed just a hit in eight innings. Meanwhile, Antoine Duplantis and Jake Slaughter led LSU’s offensive charge with three hits each. Maryland has the personnel to get things back on the right track, but what an ugly start to the 2017 campaign. Terps starting pitcher Taylor Bloom had an afternoon to forget, allowing six runs on seven hits in just two innings.

Hopefully this doesn’t become a consistent trend, but Chanticleers Preseason All-American righthander Andrew Beckwith had another performance to forget in an ugly 22-9 loss to West Virginia. Beckwith came out of the bullpen last weekend, but was moved back into the starting rotation against the Mountaineers. He’s had better days. Beckwith allowed nine runs (eight earned) on 14 hits in just 3.1 innings. Meanwhile, West Virginia’s offensive surge was led by Darius Hill and Jackson Cramer. Hill had four hits and a home run, while Cramer had a monster day, collecting five hits and a home run and knocking in six runs.

5. Tulane And Cal Poly Are Scuffling

The Green Wave and Mustangs are two teams who entered the season expected to compete for postseason berths. Well, both teams better figure something out sooner rather than later. Tulane dropped its Saturday contest to UC Santa Barbara, 14-1, to lose that series and fall to 1-5 overall. J.P. France had a tough day on the bump for Tulane, allowing eight runs on eight hits in three innings … As for Cal Poly, it hasn’t scored a run in 20 innings after losing 16-0 to Pacific on Saturday. CP starting pitcher Kyle Smith allowed six runs in 2.1 innings, while for the Tigers, James Free had a big day at the plate, smacking three doubles and knocking in four runs.

UNC Wilmington has one of college baseball’s most explosive offenses, with a plethora of accomplished veterans back from last year’s elite lineup. But the Seahawks have not been able to get their bats going on the road at Ole Miss, which clinched a second straight big series win against a contender from the Old North State with an 8-4 win against UNCW on Saturday. Big righty James McArthur (6 IP, 2 H, 1 ER, 1 BB, 11 K) was dominant on the mound Saturday for the Rebels, who got three hits apiece from Tate Blackman and Colby Bortles plus four hits from freshman Cole Zabowski. The Seahawks actually took a 4-3 lead in the top of the eighth, but Ole Miss responded with a five-run outburst in the bottom of the frame, highlighted by Bryan Seamster’s pinch-hit, go-ahead two-run homer. The Rebels improved to 6-0, and their early series wins against East Carolina and UNC Wilmington will prove to be huge feathers in their cap by season’s end, because the Pirates and Seahawks are going to have very good seasons. So is Ole Miss, clearly.

Pepperdine evened up its series at No. 14 Texas A&M with a big 2-1 win in College Station. The Waves broke a 1-1 tie on Aaron Barnett’s RBI double against preseason All-American Corbin Martin in the seventh, and Max Gamboa (6.2 IP, 5 H, 1 ER, 2 BB, 10 K) stymied an A&M offense that scored a boatload of runs in Week One against Bowling Green. Pepperdine, which opened the season with a nice sweep of A-10 preseason favorite Saint Joseph’s, improved to 4-1 on the young season. The West Coast Conference race should be a dandy, with Gonzaga, San Diego, Loyola Marymount and even Pacific (which shellacked Cal Poly to clinch its first series win over the Mustangs since 1999) all making noise early in the season.

Speaking of USD, the Toreros won the championship at the second annual Tony Gwynn Classic by going 3-0 and finishing with a better run differential than Tennessee, which also posted a 3-0 mark on the weekend. The Toreros notched a pair of convincing victories against quality West Coast opponents on Saturday, roughing up UC Irvine 14-6 in the morning and then taking down Oregon 7-2 on Saturday night. USD catcher Riley Adams won tournament MVP honors after going 3-for-4 with four RBIs against the Anteaters and then hitting a two-run homer against the Ducks. The athletic, speedy duo of Jeff Houghtby and Colton Waltner wreaked havoc atop the San Diego lineup all weekend and contributed three hits apiece in the Oregon game. Talented freshman Chris Murphy earned the win in relief with 4.2 innings of two-hit, shutout ball, striking out eight.

The Volunteers, meanwhile, followed up their pair of wins Friday with an exciting 10-9 win against UCI on Saturday. The wild back-and-forth affair ended when Tennessee pushed across the go-ahead run in the bottom of the eighth and the game was called due to a curfew (a local noise ordinance required the late game to start immediately thereafter). Dynamic freshman Justin Ammons had three opposite-field doubles and a triple off the right-center wall to lead Tennessee’s high-flying offensive attack. I’ll have plenty more later Sunday on the Volunteers, Toreros and the other teams I watched in a Saturday tripleheader in San Diego.

Mississippi State senior slugger Brent Rooker started this weekend off on an incredibly torrid streak, going 8-for-8 with 14 RBIs in his first two games against Indiana State and Marist. After hitting two homers and two doubles in his eight-RBI onslaught Friday against the Sycamores, Rooker kept rolling with another homer and another double in his six-RBI performance in a 12-4 win against Marist on Saturday. He finally came back to earth with an 0-for-3 showing in Saturday’s second game against ISU, but it’s hard to complain about going 8-for-11 with 14 RBIs in the first three games of a four-game weekend. Peyton Plumlee delivered eight innings of three-hit, shutout ball to help lead MSU to a 9-1 win in that Saturday night game against the Sycamores.

Good luck picking which Saturday game gets the nod for wildest comeback of the weekend. Nominee No. 1: Memphis trailed Illinois State 11-0 after two and a half innings, and stormed all the way back to win 12-11. The Redbirds did most of their damage in a seven-run second, but the Tigers put together a seven-run rally of their own in the fifth, highlighted by Kyle O’Keefe’s three-run triple. That cut the deficit to 11-9, and the Tigers added single runs in the eighth and ninth to force extra innings, then won it on Colton Neel’s walk-off bases-loaded walk (his fourth free pass of the game) in the 11th. You might not be shocked to learn that the two teams combined for 20 walks in the game, with Illinois State pitching issuing 12 of them.

Nominee No. 2: Dayton led USC Upstate 16-6 after putting up 11 runs in the fifth inning, but that wasn’t enough to win. The Spartans answered with eight runs in the bottom of the fifth and kept the offense going, eventually winning by the absurd score of 21-20 in 12 innings. The two teams had 19 hits apiece and combined for six errors and 24 walks (15 of them issued by Dayton pitching), and that’s the recipe for a 41-run ballgame. USC Upstate’s Charlie Carpenter had four hits and six RBIs while Jordan Miller had three hits and six RBIs to lead the offense; Carpenter homered twice while Miller went deep once.