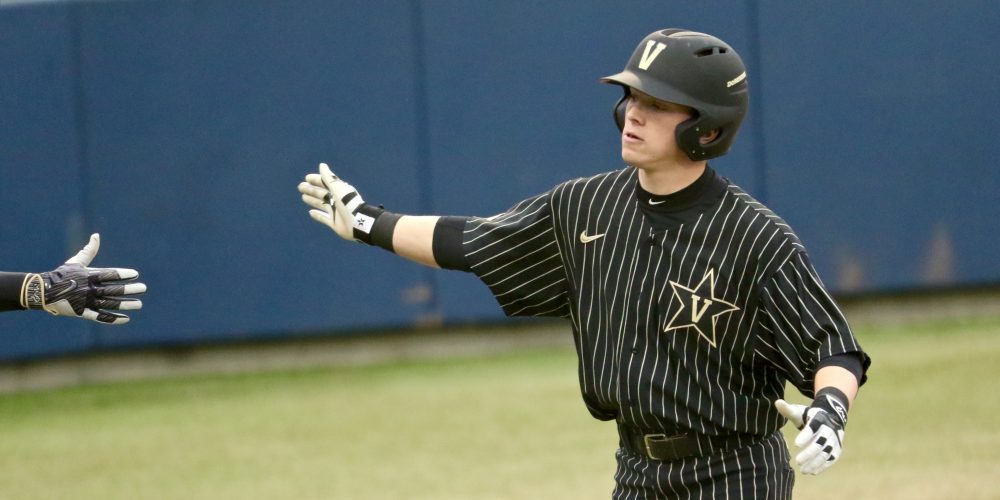 The Commodores fell out of the No. 1 spot in the D1Baseball Top 25 for the first time this season after losing a series at Texas A&M last weekend, but they have responded in impressive fashion. After four pitchers (led by Mason Hickman) combined on a midweek shutout of Belmont, Vandy got a complete-game shutout from Drake Fellows in Thursday’s series opener against rival Florida. On Friday, Vanderbilt simply shellacked the Gators 15-2 to clinch the big series and improve to 3-2 in the SEC.

Seniors Ethan Paul and Stephen Scott had huge days to lead Vanderbilt’s 19-hit barrage. Paul went 5-for-6 with three runs, a double, a triple and six RBIs, boosting his season line to a robust .416/.451/.618 with 35 RBIs. Scott went 4-for-4 with three runs scored to raise his slash line to .386/.514/.566. That might be the best duo of senior hitters in college baseball this year.

Vanderbilt also got six innings of one-hit, shutout work from another senior, Patrick Raby — who worked around six walks and struck out seven. Raby improved to 4-0, 0.57 in six starts this season. For all the gnashing of teeth about Vanderbilt’s flaws — and the walk rate of this pitching staff does remain a concern, as it issued 10 more free passes Saturday, giving it 109 walks in 205.2 innings this year — the Commodores now find themselves 18-5 on the year. Florida, on the other hand, is desperate for a Sunday win to avoid falling into a 1-5 hole in SEC play.

The senior has four of Vandy's 18 hits. 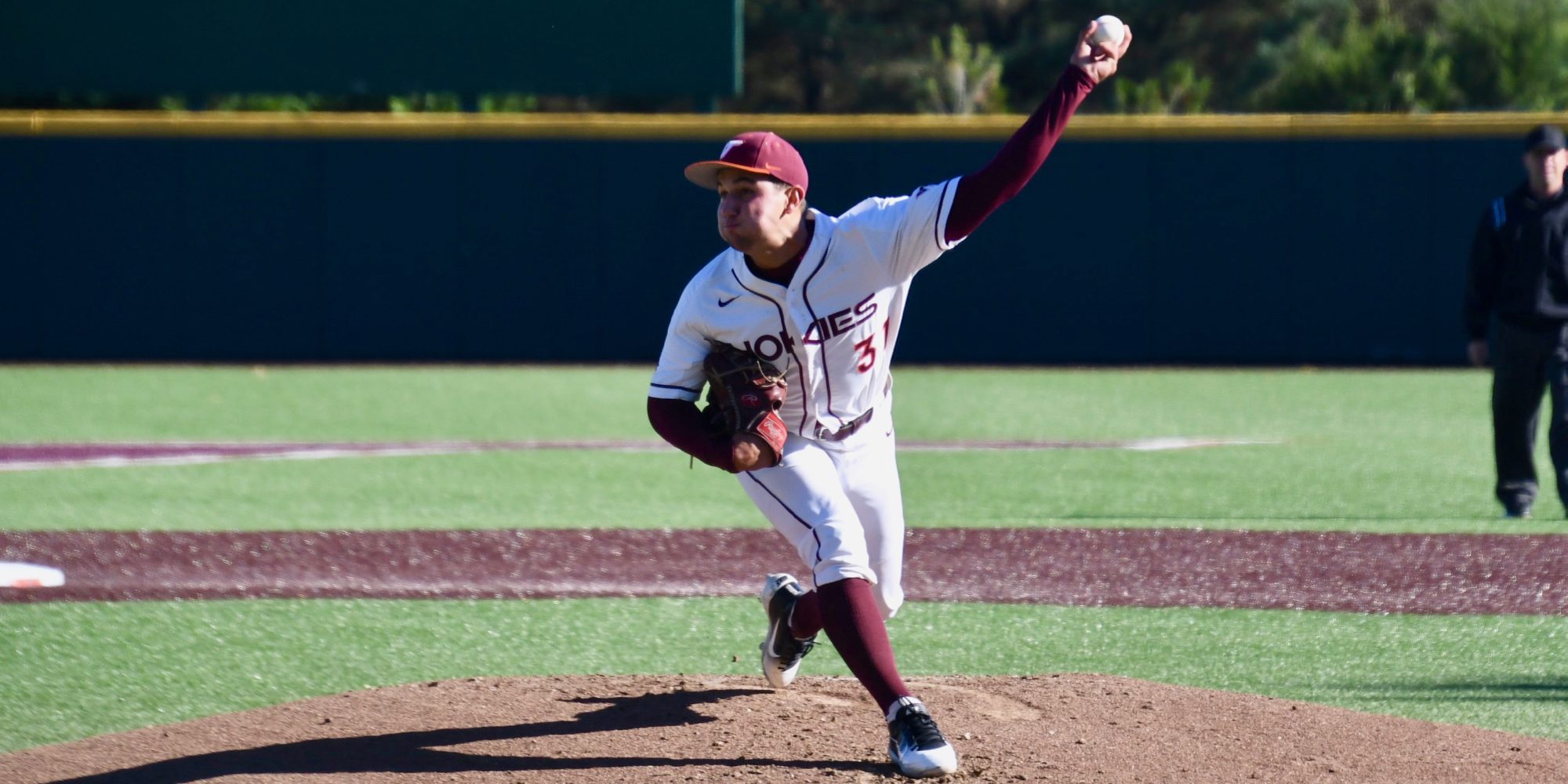 Talented lefthander Ian Seymour has put together a very good sophomore year for Virginia Tech thus far, but he turned in his best outing of the season in Friday’s 4-1 win against No. 16 Virginia Tech. Seymour held the Tar Heels hitless until allowing an infield single to Danny Serretti with one out in the ninth. He settled for a three-hit, complete-game victory, walking just one and striking out six.

Seymour was simply masterful against a good UNC lineup, allowing just four balls to leave the infield and retiring 19 straight hitters during one stretch. Virginia Tech coach John Szefc said in the fall that Seymour added 15 pounds of strength to his 6-foot frame over the sumer and fall, helping his fastball gain velocity (he can now bump 90-91, after working mostly at 86-89 last year) and improving his stamina. He turned in his first career complete game on Friday, improving to 4-0, 3.00 on the season, with 36 walks and 10 strikeouts in 33 innings.

The Hokies are now 16-6 — the first time they have been 10 games over .500 this late in the season since 2013. They’re also 4-3 in the ACC, putting them in a tie with Georgia Tech atop the Coastal Division standings — while UNC has found itself in a 2-5 hole in conference play.

NC State started ACC play 5-1 after two home series victories, but this weekend presented its first conference road test of the year against a talented Miami club. But it was business as usual for NC State on Friday night, as the Wolfpack rode a five-run fifth inning to a 6-3 victory, improving them to 21-1 on the season.

The big blow in that big fifth inning was a three-run homer by David Vazquez, who has provided a nice spark of late, as I wrote Monday. Freshman hit machine Tyler McDonough added three hits to lead NC State’s 13-hit attack, and sidewinder Baker Nelson worked two hitless, scoreless innings of relief to earn the win. NCSU rapped out 12 hits against Miami ace Evan McKendry, who took his first loss of the season.

Lefthander Jacob Cantleberry has been a huge addition for Missouri out of the junior-college ranks, and he led the Tigers to their first SEC victory Friday night, 2-1 over No. 18 Ole Miss. Cantleberry limited the loaded Ole Miss lineup to one run on six hits and a walk over 6.1 innings, striking out eight. Cantleberry impressed D1Baseball scouting director David Seifert last week against Arkansas, showcasing a plus changeup, an 87-90 fastball that he locates well, and a fringe-average curveball (read more about him in this week’s Scouting Trail).

The Rebels tied the game at 1-1 with a run in the top of the fifth, but Missouri answered with a run in the bottom of the frame on Josh Holt’s RBI double, and that proved enough offense. Jordan Gubelman followed Cantleberry with two scoreless innings of relief, and Cameron Dulle recorded the final two outs for his third save.

5. Yellow Jackets come from behind to sting Louisville’s Detmers

Another week, another superb outing from Louisville ace lefthander Reid Detmers, who broke Brendan McKay’s Patterson Stadium record with 16 strikeouts Friday against Georgia Tech — but lost. Xzavion Curry (8 IP, 1 H, 1 ER, 2 BB, 9 K) went toe to toe with Detmers, allowing a hit and a run in the first inning and then shutting down the Cardinals for the next seven. Tech tied the game on a sacrifice fly in the seventh, then took the lead on Kyle McCann’s RBI double in the eighth to hand Detmers his first loss of the season. Baron Radcliff added a solo homer in the ninth for insurance, and Tristin English worked a scoreless ninth for his third save.

It’s a big win for Georgia Tech, which earned its first-ever win against Louisville in ACC play (the Cards swept the first two conference series between the teams, in 2015 and 2017). Tech climbed above .500 in the ACC at 4-3.

Detmers, by the way, now has 66 strikeouts and eight walks in 41.1 innings this year, along with a 0.87 ERA. But he took a very tough-luck loss on this night. Credit Curry and the Yellow Jackets for coming up big on the road against a marquee opponent.

1. LSU’s Hess steps up in win over Georgia

No pitcher in college baseball is more under the microscope right now than LSU righthander Zack Hess. There’s a portion of the LSU fan base that believes he should stay in the weekend rotation, while there’s a more vocal portion that feels he should be relegated to the bullpen.

Well, Hess knows it’s his job to get the Tigers’ weekend started in a positive fashion, and he pitched like a guy with something to prove Friday night in a 1-0 win over sizzling hot Georgia. Hess struck out nine, didn’t walk anyone and allowed eight hits in eight shutout innings. The most telling stat of the night for the talented righty was no walks. That was an issue at Texas a few weekends ago.

While Hess shined and led the charge in Athens, it’s worth mentioning Georgia sophomore righthander Emerson Hancock as well. Hancock, too, put together a terrific start, striking out four, walking two and allowing a run on two hits in eight innings.

It was a perfect night for LSU and, especially, Hess. He’s silenced the doubters for at least one evening.

"My gut feeling is telling me to take you now," Mainieri told him.

"My gut tells me you ought to go back to the dugout," Hess replied.

Mainieri loved the response, left him in the game. #LSU

2. TCU rallies to win wild one against Texas

The rivalry between Texas and TCU always has some interesting happenings, and Friday’s series opener was no different. The Longhorns and Horned Frogs traded zeroes for much of the night, as the two teams entered the eighth inning scoreless.

Then, in the eighth inning, Texas center fielder Duke Ellis stole home before a sacrifice fly in the ninth gave the Longhorns a 2-0 lead heading to the bottom of the inning with Kam Fields on the mound. Fields, though, struggled, walking two batters in the frame, allowing another run to score via a wild pitch, and allowing the final two runs to score via RBI singles.

It was a night to remember for the Frogs, and certainly center fielder Johnny Rizer, who finished the contest with two hits and an amazing defensive play that robbed UT of a home run in a 3-2 triumph.

HIGHWAY ROBBERY!!! Johnny Rizer robs the Longhorns of a home run in the top of the fourth! ??? #GoFrogs #SCTOP10 pic.twitter.com/lQkRwcQDtx

Will Arizona State ever lose? I know we’re kind of kidding about that at this point, but are we? The Sun Devils just continue to roll, dominating Oregon 12-2 on the road to begin that crucial Pac 12 series.

The nation’s hottest hitter, Hunter Bishop, had yet another huge night at the plate. Bishop hit two homers in the win, while Spencer Torkelson also smacked a home run. Lyle Lin and Sam Ferri also knocked in two runs, while on the mound, ASU’s Alec Marsh put together a quality start in spite of some command issues. Marsh struck out five, walked five and allowed just three hits in 6.2 shutout innings.

As for the Ducks, starting pitcher Cullen Kafka has done some nice things this season, but was rocked for six runs on seven hits in 3.1 innings.

With the win, ASU is now an incredible 21-0 on the season. What a campaign thus far for Tracy Smith’s crew.

The Tigers showed all of us something Friday night. Auburn stellar sophomore righthander Tanner Burns had been incredible so far this season. But on Friday, he was finally human, allowing five runs (four earned) on five hits in five innings, putting the Tigers in a hole after a four-run MSU first inning.

Well, the Tigers still found a way to come back and win, scoring two runs in the sixth, seventh and eighth innings to beat the boiling hot Bulldogs, 6-5. Steven Williams and Rankin Woley each hit solo homers in the sixth, while a pair of groundouts led to two runs in the seventh. In the eighth, Edouard Julien hit an RBI double before Kason Howell, a freshman, brought in the go-ahead run with an RBI single.

Woley and Howell each finished the night with two hits, while righthander Cody Greenhill earned his fourth save by tossing two shutout frames to end the game. Speaking of MSU, lefthander Ethan Small struck out seven, walked three and allowed two runs on three hits in six innings.

The rest of the weekend could be interesting for the Tigers. Lefty Jack Owen is out with an injury this weekend, while righthander Davis Daniel still isn’t ready to return. So, safe to say all hands are on deck in the final two games.

Out in front! ?@edouardjulien7 ties the game with a RBI double and @kasonhowell splits the right side with two outs and two strikes to drive him in!

5. Texas Tech gets back to business

The Red Raiders have one of the nation’s premier offensive lineups but scuffled earlier this season at the Frisco College Classic, and also last weekend down in Austin against Texas to kick off Big 12 Conference play.

Well, the Red Raiders appear to be back on track from an offensive standpoint, pelting Michigan pitching on Friday night en route to a series-clinching 10-3 victory. Speedy Tech freshman Max Marusak hit a triple and finished the night with two hits, while leadoff hitter Gabe Holt knocked in two runs and Braxton Fulford and Cam Warren also each knocked in a pair of runs. Warren finished the night with three hits, while Brian Klein and Tanner O’Tremba chipped in two-hit performances.

On the mound, righthander Caleb Kilian put together a strong start for the second straight week, striking out six, not walking anyone and allowing two runs on five hits in six innings, while Michigan’s Karl Kauffmann allowed six runs on nine hits in five innings of work.

With the win, Tech has now outscored Michigan 21-5 in two games in Lubbock. That’s what you call making a statement.