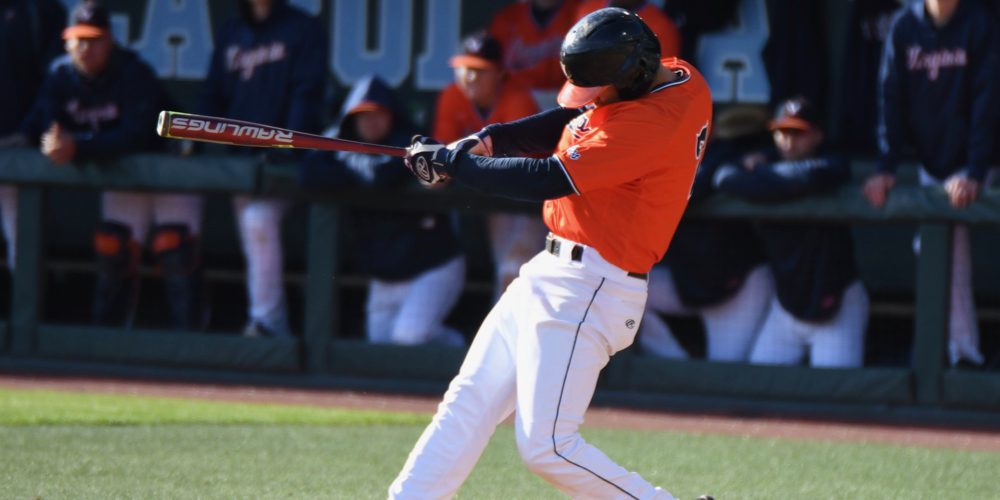 The Eagles are getting used to being in this position. They moved to 4-0 on the season against Miami, Florida and Florida State with a 3-0 home win over the Hurricanes. FGCU righthander Mario Leon put together a strong start in the victory, striking out six, walking one and allowing just two hits in seven shutout innings. Meanwhile, Julio Gonzalez led the offense with a hit and two RBIs. Miami wasted a solid start from Greg Veliz, who struck out four and allowed just a run on three hits in 6.1 innings. How about this from the Eagles? With the win, they’re now 9-1 vs. RPI Top 50, along with a Top 10 RPI and a respectable strength of schedule. FGCU could be that mid-major regional host for 2017.

In college baseball, it’s all about making the best of every situation. So, that’s exactly what the 5-foot-9, 155-pound, Horned Frogs senior did Wednesday afternoon in an 18-2 win over UT Rio Grande Valley. Hesse, who had a limited number of at bats so far this season, went 2-for-3 with a home run, walk, two runs scored and five RBIs.

— Michigan third baseman Drew Lugbauer had an afternoon to remember in a crushing 13-4 win over Central Michigan. Lugbauer went 3-for-5 with a home run, a run scored and three RBIs to lead the Wolverines, who improved to 19-6 overall.

— Virginia hit the road and picked up a nice 4-2 win over VCU. Righthander Derek Casey put together a strong start for the Cavaliers, striking out 10, walking two and allowing two runs on five hits in 6.1 innings, while Adam Haseley had two more hits to up his batting average to an impressive .412. He also has hit eight homers and knocked in 22 runs.

— Clemson got a walk-off RBI single in the bottom of the 11th inning from Reed Rohlman to beat Winthrop 6-5 at home. Grayson Byrd had a solid night at the plate with three hits, while four others had two-hit performances. Monte Lee’s club continues to get it done, now sitting at an impressive 22-4 overall.

— Texas Tech continues its impressive play on Wednesday with a midweek series sweep over Texas Southern in a 14-7 victory. John McMillon hit another homer after his ridiculous shot on Tuesday, while Michael Berglund went 3-for-6 with a homer and two RBIs.

— Southeastern Louisiana got off to a fast start this season, but took a step back this past weekend by somehow getting swept by Houston Baptist. Well, the Lions just needed the Cajuns to roll into town to get back on track. Southeastern won the first game of the afternoon, which was the resumption of an earlier game postponed because of rain. Meanwhile, the Lions cruised to a 15-3 victory over the suddenly scuffling Cajuns in the nightcap. How about this? Cajuns pitchers walked 10 batters, while Carson Crites hit a homer and Drew Avans and Brennan Breaud each had two hits and the duo combined for five hits.

— Bethune-Cookman is having a nice season and Tyler Krull struck out eight, walked one and allowed a run in six innings in a 10-2 road win over North Florida. BCC’s Jordan Stacy had a huge night at the plate, going 3-for-4 with a homer and five RBIs.

— Northwestern is having a tough season thus far, but had plenty to cheer about Wednesday in a 2-0 win over Chicago State. Lefthander Cooper Weatherbee had a solid start for the Wildcats, allowing just four hits in seven shutout innings. Meanwhile, Connor Lind and Matt Hopfner each had a pair of hits.

— Indiana State earned state supremacy for at least one night after it beat Indiana 7-3 on the road. The Sycamores were led by a pair of solid pitching performances from Ryan Keaffaber and Ethan Larrison. Keaffaber allowed a run on two hits in four innings and Larrison struck out seven and allowed just two hits in 3.1 shutout innings. Offensively, outfielder Tony Rosselli led the way, going 2-for-4 with a double and two RBIs.

— Coastal Carolina picked up a solid midweek win over UNC Wilmington in an easy 13-2 victory. CCU’s Kyle Skeels hit a home run in the contest, while Peyton Isaacson knocked in three runs and Kevin Woodall went 2-for-4 with two RBIs.

— Old Dominion is one of the hottest teams in our sport right now. The Monarchs have won 10 of their last 11 contests after beating William & Mary 11-6 on the road. Culver Lamb led the ODU offensive charge with a homer and four RBIs, while Nick Walker hit a homer, smacked a double and knocked in three runs. You can check out our Aaron Fitt’s in-depth report on the Monarchs in this week’s Under The Radar feature.