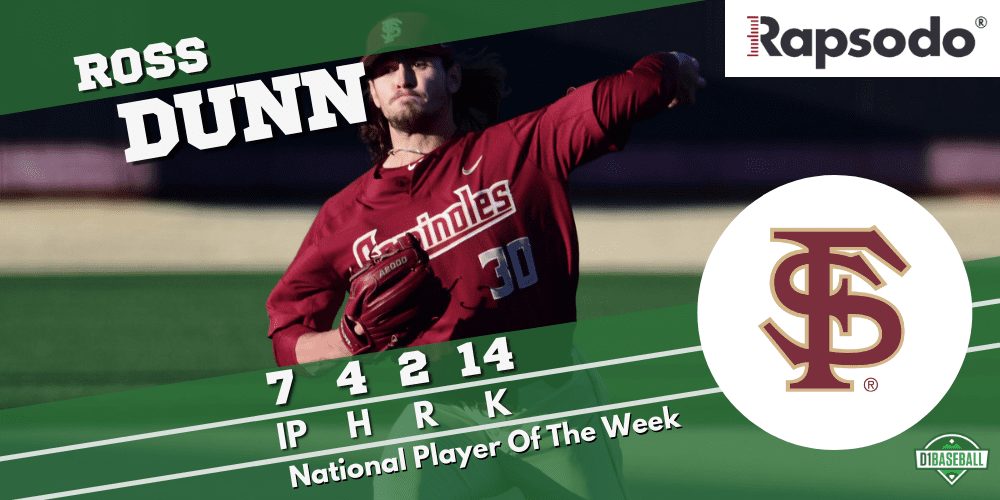 Florida State picked up a big ACC road series win over Wake Forest this past weekend, and sophomore lefthanded pitcher Ross Dunn was a big reason for that. For his stellar performance in the series finale, he is this week’s D1Baseball/Rapsodo National Player of the Week.

Dunn, a 6-foot-3, 221-pounder, is one of the more improved pitchers in college baseball so far this spring. Dunn worked just 12 games last season and tallied a 2.13 ERA in 12.2 innings of work. During that time, he was more 90-92 and up to 93 mph with his fastball with solid overall stuff. Well, his stuff has taken a big leap forward this season, and that has led to more dominant numbers, tallying a 1.86 ERA in 19.1 innings of work, along with 36 strikeouts and 12 walks. Teams are hitting just .134 against him.

He was at his absolute best against the Demon Deacons last weekend, striking out 14, walking three and allowing two runs on four hits in seven innings of work. Stuff-wise, he was electric, sitting comfortably in the 92-95 range, while also bumping 96 mph at least once according to our Aaron Fitt. Dunn worked with a slider in the 82-84 mph range along with a changeup.

FSU already had two premier starting pitchers coming into the season in Parker Messick and Bryce Hubbart. Now, they have another in rising lefthander Ross Dunn.

Congratulations to Dunn for the weekly honors.