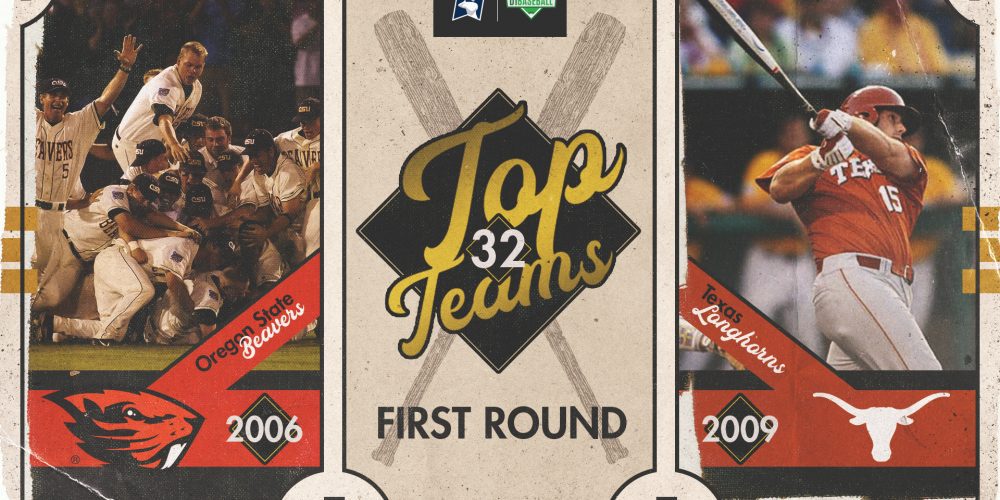 Today would have been the day two of the 2020 College World Series. Since we don’t have live baseball to watch, we’re taking a look back at the greatest CWS teams of the modern 64-team NCAA tournament era. In conjunction with NCAA.com, we’ve made our picks for the 32 best Omaha teams since 1999 and seeded them into a bracket.

The 2000s were an exceptionally fruitful decade for Texas, and you can surely find folks around Austin who regard the 2009 team as the most talented Longhorn squad of the era — but it fell one win shy of taking home the ultimate prize. Otherwise, this team accomplished just about everything it could accomplish. It won the Big 12 regular-season and conference tournament titles to earn the No. 1 national seed. It survived the longest game in NCAA history during the Austin Regional, outlasting Boston College in 25 innings thanks in large part to a legendary outing from closer Austin Wood, who held BC scoreless for 13 innings (the first 12.1 of which were also hitless). Then the Longhorns survived a scare from TCU in super regionals, and won three hard-fought games in Omaha against Arizona State (twice) and Southern Miss. Texas fell behind 6-0 through three innings its CWS opener against ASU (which had first-team All-American and future big leaguer Mike Leake on the mound), prompting coach Augie Garrido to summon his team for an impromptu dugout tongue-lashing between innings — which was immediately followed by a six-run fourth inning to tie the game, propelling the Horns to a 10-6 win. The rematch against ASU was almost as memorable, as the Horns came from behind with a pair of solo homers in the ninth to win 4-3, sending them to a CWS Finals showdown against No. 3 national seed LSU.

That showdown between blue bloods lived up to its billing. LSU broke a 6-6 tie in the ninth to win the opener 7-6. Texas bounced back win even the series 5-1 behind a complete-game masterpiece by first-team All-America ace Taylor Jungmann, who finished the CWS 3-0, 0.59 in 15.1 over four appearances (three in relief). But UT’s pitching ran out of gas in the finale, as LSU cruised to an 11-4 victory. Uncharacteristically for a Garrido club, power bats actually carried these Longhorns in Omaha, as they cranked 14 homers in six games, led by four from Russell Moldenhauer and three from Cameron Rupp (including the walk-off shot in the bracket final against ASU). But for most of the year, elite pitching carried the Horns, which ranked second in the nation with a 2.95 ERA and first in fewest hits allowed per nine innings. Jungmann, Chance Ruffin and Cole Green formed the nation’s best weekend rotation, while Wood, future big leaguer Brandon Workman, and Austin Dicharry anchored an elite bullpen.

How They Match Up: These teams played in the same offense-oriented era, when bats were potent and the wind at Rosenblatt Stadium was often blowing out. Nonetheless, both teams were built around pitching and defense. The ’06 Beavers ranked 14th nationally in ERA and eighth in fielding percentage, while the ’09 Longhorns ranked first in ERA and eighth in fielding percentage. OSU was the most offensive team overall (ranking 57th in scoring, while Texas was 217th), but UT’s offensive numbers were always suppressed by cavernous UFCU Disch-Falk Field, especially in those days before the fences were moved in. Once UT got itself into a more hitter-friendly ballpark, it proved it had the pop to take advantage, walloping those 14 long balls in Rosenblatt. The best big league hitter to come out of either of these teams was Texas first baseman Brandon Belt, who was just starting to scratch the surface of his potential in 2009, when he was a fifth-round pick. From an overall talent standpoint, these teams were very comparable; each club was well stocked with college stars, but neither was overflowing with players who would become stars in the majors. These were just two very balanced teams with similar styles of play and similar roster composition.

Both the '06 @BeaverBaseball squad and '09 @TexasBaseball team played in the same offense-oriented era, when bats were potent and the wind at Rosenblatt Stadium was often blowing out.

Who do you think takes the dub?