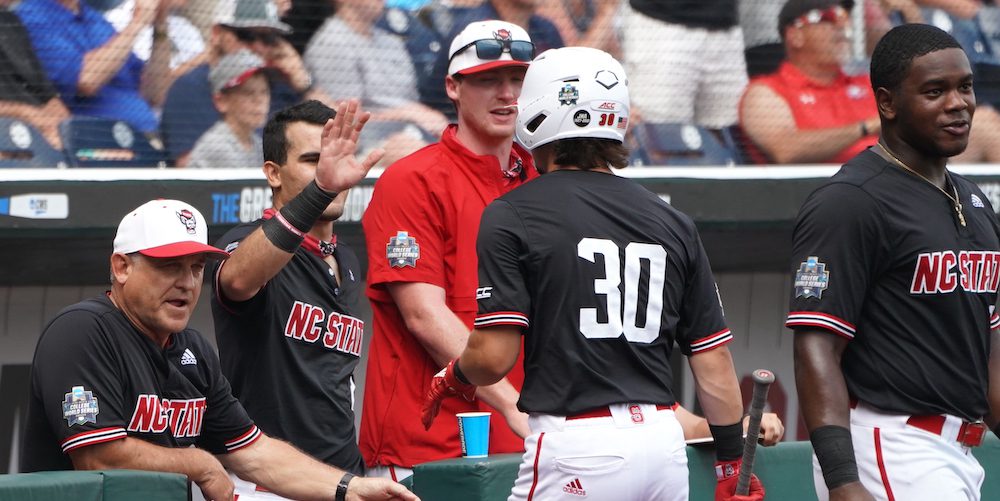 OMAHA — NC State is living a nightmare as Vanderbilt and Mississippi State prepare to play the CWS Championship Series beginning on Monday night.

The last 48 hours have been a tumultuous time for college baseball, to say the least. NC State’s incredible run came to end, and there’s little doubt the Pack would’ve had a strong chance to win the program’s first national title. However, as the college baseball world knows by now, their season ended after several players contracted COVID-19, and subsequent contact tracing declared their Saturday game against Vanderbilt a ‘no contest’.

NC State’s removal from the College World Series has caused some serious vitriol toward the NCAA on social media and other avenues. And I get it. This is no way anyone’s season should have ended, and it’s by far the last way I want to see anyone’s season ended. I was thoroughly enjoying NC State’s CWS run. What an incredible, incredible run, and consummate ‘team’.

In the early morning hours on Saturday, the D1Baseball staff hit the phones trying to figure out exactly what had happened on Friday leading up to the NCAA’s decision to declare Saturday’s Vandy-NC State game a ‘no contest’ at 1:10 a.m. Sources close to the NC State program spoke to myself and Aaron Fitt early Saturday. And today, we got to the bottom of everything with Anthony Holman, the Managing Director of Championships and Alliances for the NCAA. We corroborated much of the timeline with NC State sources on Sunday, though those same sources said this issue between NC State and the NCAA is far from over, and that the lack of communication was a serious problem.

For some context on COVID protocols and COVID-19 regarding other NCAA championships, Holman said this morning the NCAA has had 64 total championships (including baseball) with 284 total events, including the preliminary rounds of the championship tournaments, since the second week of February.

During that time, the NCAA has administered more than 130,000 tests with a positivity rate of 0.04% amongst more than 2,700 teams. Only two sports — men’s and women’s basketball — have had championships take place in a bubble where the NCAA has total control of who’s going in and who’s going out. The rest of those 62 championships, including baseball, fall under what are ‘controlled access’ championship events.

So, what exactly are the testing procedures for controlled access events?

It’s a two-step testing process. Every unvaccinated member of a team is required to take an antigen test upon arrival at a championship event, and the testing for unvaccinated individuals continues on a routine, scheduled basis. In Omaha, those have typically occurred a day before each team’s game.

So, the procedure is as follows: A player/coach/travel party member will take an antigen test, which has a higher false positive/negative rate than a more conclusive PCR test. If that person tests positive on an antigen test, the NCAA sends that person to take a more confirmatory PCR test. If that PCR test is positive as well, they are not cleared, and the individual then enters what the NCAA dubs ‘blue protocol’.

What does that mean? It means they are not clear to participate, and they immediately go into isolation, and thus contact tracing begins. All those guidelines, Holman said, are consistent with local health guidelines.

“It’s important to note that this approach has been working with other championship events,” Holman told D1Baseball. “When you look at the championships we have conducted, only two have been in a bubble, and for the most part, the championships have been successful in keeping COVID away. Our data continues to show that student athletes are not contracting this from competition.”

As our Aaron Fitt noted in this story from a couple of days ago, NC State joins an unfortunate list of programs who have had their seasons ended because of COVID issues — VCU Men’s Basketball, Michigan Men’s Ice Hockey, Notre Dame Men’s Ice Hockey and Rice Women’s Volleyball.

As for NC State, let’s get to the timeline of events over the past week.

— The NCAA confirmed that testing the day before the Vanderbilt game revealed no positive COVID-19 test results among all members of the NC State traveling party. NC State was given the all clear to play Vanderbilt on Monday.

— It was a great day for the Wolfpack. They defeated Vanderbilt 1-0 to move to 2-0 in the winner’s bracket. In the postgame press conference, NC State coach Elliott Avent pointed out a few members of the traveling party, including a player, had caught a ‘bug’ and were needing some rest the next few days. He pointed out that ‘other’ players were dealing with this bug, too. The NCAA said they found out later Monday that one of the players who had the ‘bug’ had a roommate removed at some point on Sunday, which created some concern inside the NCAA.

— The player that Avent said had a ‘bug’ on Monday, June 21, tested positive in an antigen and PCR test on Tuesday, which deemed him ‘not clear to participate’, and thus was directed to isolate. The roommate of the individual, who was in direct contact, was then directed to quarantine, according to the NCAA. The NCAA later found out that the first individual was symptomatic prior to Monday’s game, which Avent alluded to in his press conference. Avent did not know at the time it was COVID-19, however, just to make that perfectly clear. Avent, assistant coach Chris Hart and others also were tested, and were COVID-19 negative, NC State sources told D1Baseball.

* Avent confirmed to D1Baseball that he was vaccinated in early March.

“We continued to test the close contact in hopes that they could come out of quarantine sooner, and perhaps they could actually play,” Holman said.

— Also on Tuesday, the NCAA sought out NC State to find out which members of the traveling party Avent was referring to when he said ‘some of our guys have a bug’. Those persons were identified, and when tested on June 22, were ‘negative’. “That was great news,” Holman said.

— Between Tuesday and Friday, June 25, NC State attempted to have the roommate of the first individual tested each day to potentially test out and be able to pitch. That request was not granted; though, the individual wound up testing positive later in the week anyway.

— Given the fact that NC State was scheduled to play Vanderbilt at 1 p.m. that day, it was not considered to be a testing day. However, the individual who was in close contact with the COVID positive player was tested in hopes that he would test negative and could come out of quarantine ‘sooner, and perhaps be able to play’. However, that player tested positive for COVID-19. He was then deemed out of action. That gave NC State two confirmed positive tests.

— The same morning, NC State discovered two more players had shown symptoms consistent with COVID-19, so were proactive and sent them over to the Marriott for further testing. Those results arrived 90 minutes before the Vanderbilt game — both members of the traveling party were positive for COVID-19. That took NC State’s COVID-positive total to four. At that point, the NCAA took this matter up the chain to the Championship Medical Team to further evaluate the situation at hand, which is what created the 45-minute delay in the game’s start time. It’s worth noting the two players who tested positive that morning were unvaccinated players.

— At this point, the NCAA informed NC State that unvaccinated players would be removed from the game and only vaccinated players could play in the game. The NCAA gave NC State the option to either forfeit and try to play Saturday or play on with a limited roster. Avent and his team opted to play, though NC State sources say they proposed to the NCAA to play a doubleheader between the two teams on Saturday instead. That request was denied. At the start of the game, unvaccinated members of the Pack team were taken to the Marriott and tested. All of those unvaccinated members of the team were negative for COVID-19, including several prominent players on the roster. None of those players were able to return to the ballpark in time to enter the game.

– With NC State having four positive COVID-19 tests, the team reached ‘outbreak’ status, which then caused the NCAA to get all members of the team tested — including the vaccinated members who played in the Friday game against Vandy. We touched on how it was possible to test vaccinated players, here, a couple of days ago. NC State sources estimate that full team testing occurred around 7:30 p.m., Friday night, and that by 11 p.m., that evening, they still hadn’t gotten word on test results. There’s a lot of frustration from the NC State side of things on the lack of communication during that time frame. Shortly after that point, the results began to trickle in for each player — four players, all vaccinated — had tested positive for COVID-19, with all other players testing negative. Eight total members of NC State’s traveling party had tested positive for COVID-19.

— According to NC State sources, it was around 1 a.m., that the NCAA informed the Wolfpack they were declared a ‘no contest’ for Saturday’s game against Vanderbilt and thus their season was over. It was then that all COVID-negative players decided to make the trek over to TD Ameritrade Park for one last picture behind home plate after a somber meeting with head coach Elliott Avent and his staff. With eight positive tests and impending contact tracing, the NCAA’s point of view was that it would be impossible for NC State to finish the tournament, while also caring about the health and safety of participants. Of course, that reasoning will be hotly contested by those who saw countless sendoff and welcoming parties at different team hotels around downtown Omaha over the past two weeks.

— All COVID-negative members of the NC State traveling party returned home to Raleigh and were greeted by thousands of fans at a welcome party at Doak Field. Those members will now have to quarantine for at least seven days, including Avent, who is scheduled to report to USA Baseball on Wednesday, June 30.

— All COVID-positive members of the NC State traveling party returned home to Raleigh via a private flight from Omaha’s Eppley Airfield.

No matter your stance on this issue, it was a dreadful way for NC State’s magical season to end.

But you now have the facts. Draw your own conclusions.