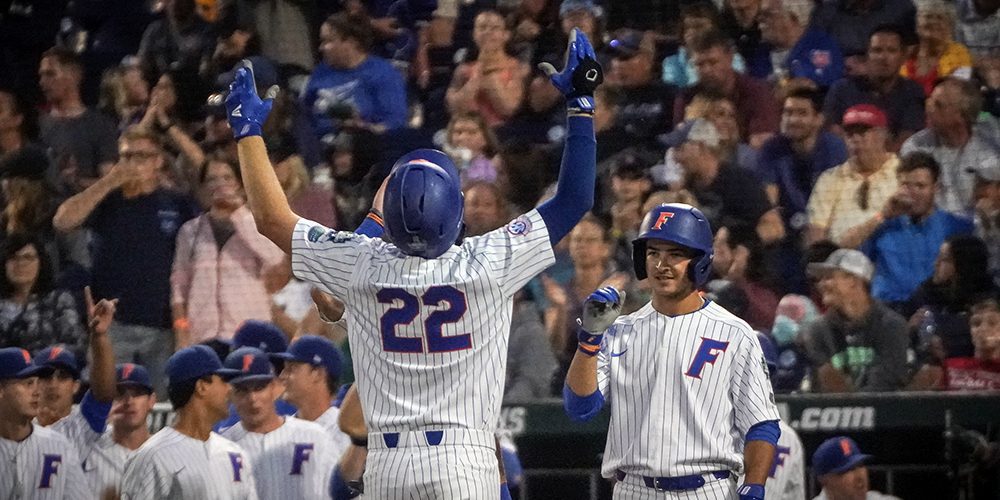 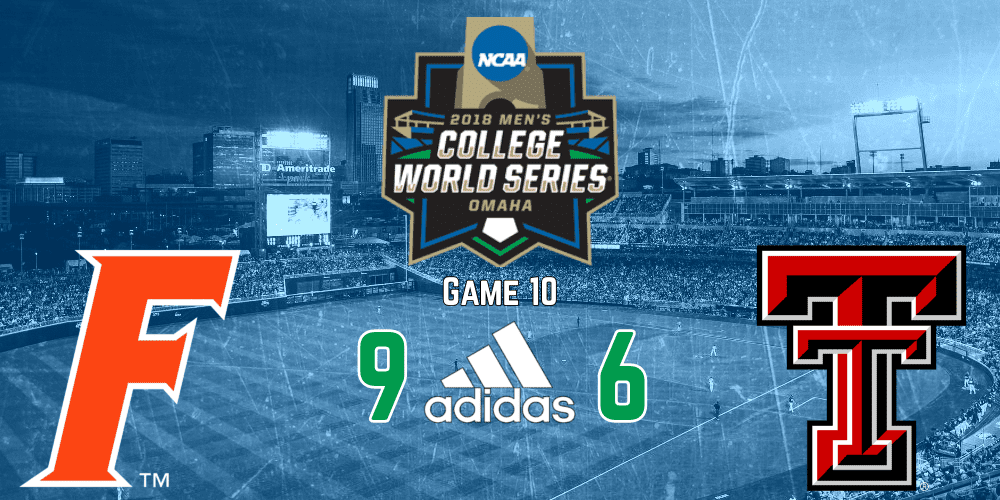 OMAHA — Four members of the everyday lineup remain from the 2016 Florida team that saw its season end with a College World Series loss to Texas Tech. The Red Raiders were the last team to eliminate the Gators from the postseason, and Thursday night the Gators returned the favor, beating Texas Tech 9-6 to reach the national semifinals for the fourth time in seven CWS trips under Kevin O’Sullivan.

Those holdovers from the 2016 lineup — Deacon Liput, Nelson Maldonado, Jonathan India and JJ Schwarz — made meaningful contributions to this win, combining for four hits and four RBIs. That quartet has played a lot of postseason games over the course of their careers, and they helped Florida maintain its poise and land some key counterpunches as Texas Tech mounted a comeback bid in the last third of the game.

Experience sure does matter on this stage, and Florida is loaded with it. But a couple freshmen with far fewer NCAA tournament games under their belts also came up huge Thursday night. First and foremost was righthander Jack Leftwich, who started and earned his first win since April 28.

O’Sullivan said after Tuesday’s win against Texas that his team was going to need a freshman like Leftwich or Tommy Mace to elevate his game and deliver six or seven strong innings of work in one of these games if the Gators were going to make a run through the losers’ bracket. Leftwich proved up to that task Thursday night, holding the Red Raiders to two runs on seven hits over 6.1 innings (the second-longest outing of his career) to improve to 5-5 on the season.

“I thought if we get five or six (innings from Leftwich) — I would be happy with five and probably ecstatic with six,” O’Sullivan said.

And early on, it looked like the Gators would be lucky to get three innings from the freshman. After a strong first inning, Leftwich ran into some control issues in the second inning, issuing a pair of walks to load the bases with one out. It was a dangerous spot for a pitching struggling with location against the nation’s second-highest scoring offense — but Leftwich escaped by getting a couple of pop-outs to strand all three baserunners. 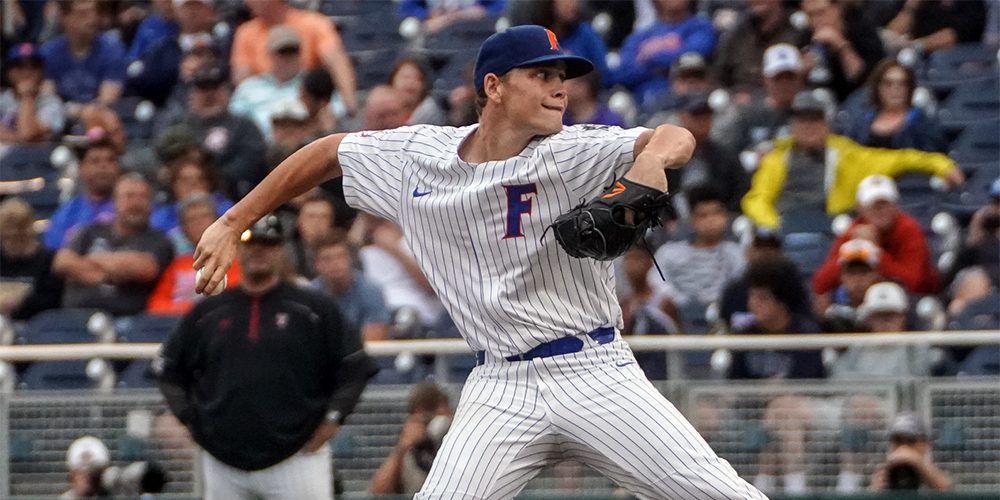 “I think the reason I was struggling was just because I was nibbling and not attacking the hitters. And I was like kind of pitching scared,” Leftwich said. “After we scored a couple of runs, I knew I had to attack the hitters and keep enough zeroes, and they were going to get themselves out. So just attack the zone.”

He was able to execute that plan effectively enough, throwing 69 of his career-high 102 pitches for strikes, resulting in 11 flyouts and just one groundout, along with five strikeouts. He elevated his 89-92 fastball effectively and let the Red Raiders get underneath it, and he mixed in his curveball and changeup enough. He also got some help from his defense in the fourth, when TTU had men at first and second with one out, and UF left fielder Austin Langworthy made a spectacular diving catch and then doubled off the runner at second base to quell the threat.

Leftwich wound up holding the explosive Tech offense scoreless through six innings before running out of gas in the seventh, by which point Florida had built a 5-0 lead.

“I think Jack got off to a really good start in the first inning and ran into some trouble there in the second, made big pitches when he needed to,” O’Sullivan said. “Thought he really settled down. To pitch in this environment, his first career start out here, I thought he handled the stage as well as you could have expected. I’m really, really proud of the way he pitched.”

Another freshman who delivered in a big way was Brady Smith, who stepped in for Jonah Girand behind the plate as the Gators tried to get a little more offense. With Schwarz limited to first base duties by a broken finger, Smith got his shot at that critical position in a do-or-die game, and he delivered solid defense and one big swing of the bat. That came in the eighth, when he smashed an RBI triple off the top of the wall in dead center field, as the Gators tacked on some crucial insurance runs.

“When you think about it, we’re in an elimination game, playing in front of who knows how many people. And I’ve got a freshman battery, and they handled it pretty darn good.”

Schwarz, a senior who will play in the national semifinals for the third time in his career, also came up huge Thursday. He struggled to find his rhythm in his first two CWS games after missing the previous three weeks with that broken finger, but Thursday he put the Gators in firm control of the game with a two-run homer in the sixth inning, making the score 5-0. It was the first CWS home run in his outstanding career.

“I definitely felt a little better, played a little more comfortable. But I think today was a good step in the right direction,” Schwarz said. “Obviously you guys could tell I wasn’t very comfortable the first couple of games. Took a lot of time off. A little rusty, but I think I’m definitely getting the hang of things again.” 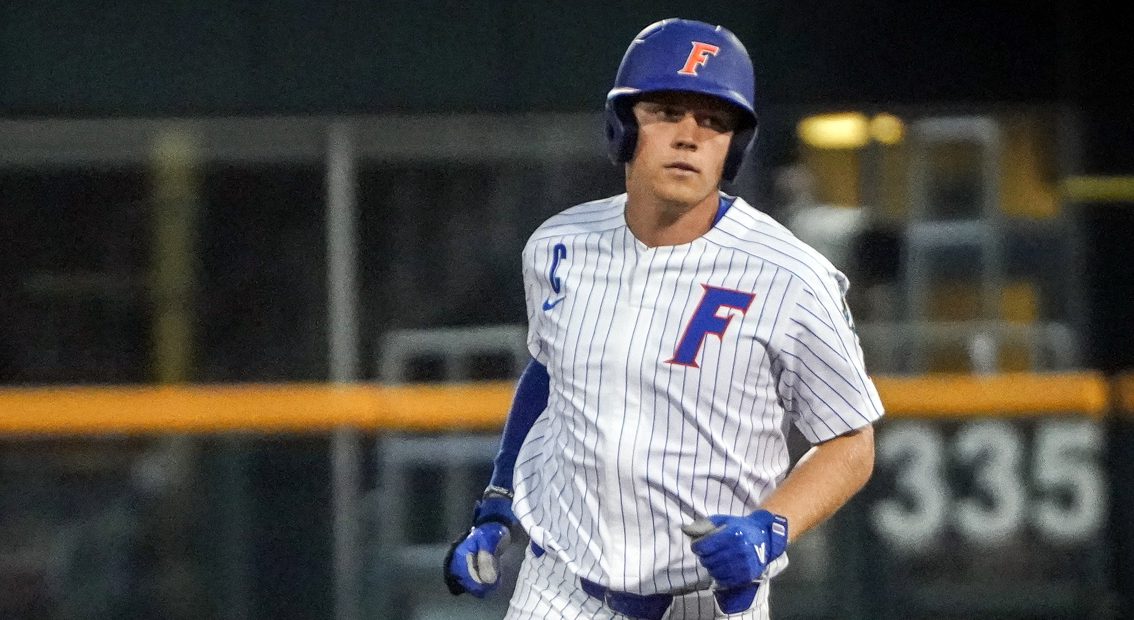 And that’s a hugely important development for the Gators, because a healthy and confident Schwarz makes an enormous difference in the heart of that order — and Florida will need all the offense it can muster against the powerful Arkansas lineup.

Of course, Texas Tech can match Arkansas for heavy firepower, and the Red Raiders never stopped coming Thursday night, even after falling behind 5-0 through six innings. But every time the Raiders rallied to claw their way back into the game, the Gators had an answer. Tech scored three runs in the bottom of the seventh and threatened to surge ahead, but another Florida freshman (lefty Jordan Butler) inherited a bases-loaded, one-out jam and stranded all three baserunners.

We’ve gotten used to seeing these kind of performances from this battle-tested Florida team over these last four years, but it’s a little different to see the Gators out-slug another high-powered offense on this stage, rather than simply shut down their opponents with premium arms, as they did during last year’s run to the national title. Florida will hope national Player of the Year Brady Singer can find a way to shut down the fearsome Arkansas lineup on Friday night, but if he can’t, it’s easy to envision this group of Gators keeping pace with the Hogs in a high-scoring affair.

“I think it was probably our best night offensively in a while, ran the bases extremely well,” O’Sullivan said. “I don’t know how many bases we stole, but we were pretty successful there. But Texas Tech was one of those teams we knew they weren’t going to go away. They hung in there with us and we knew it was going to be a nine-inning ballgame.”

Florida withstood the flurry of haymakers from Texas Tech in the late innings, and punched right back. Now it’s time for another heavyweight showdown against the Hogs.