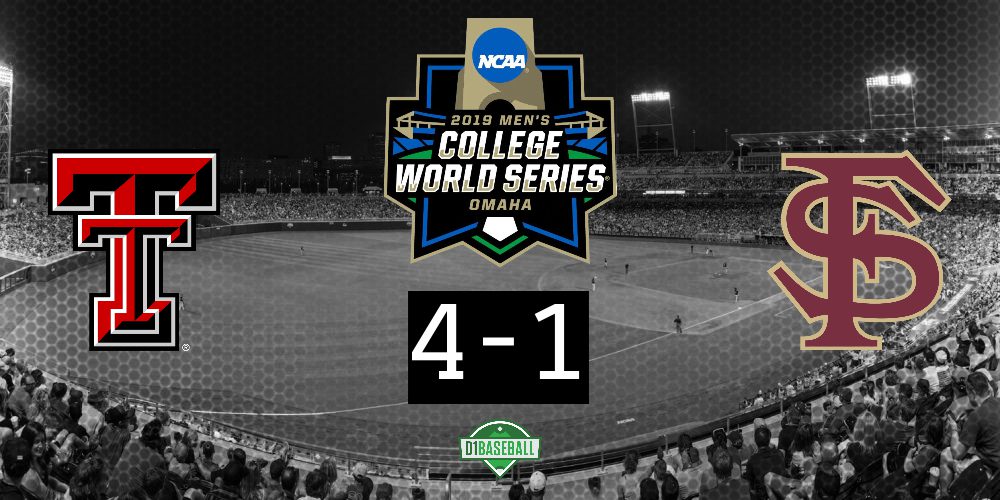 OMAHA — It was a night of remembrance about Mike Martin’s legendary career at Florida State. Lost in the mix, at least until now, was a historic night for Texas Tech.

When head coach Tim Tadlock arrived in Lubbock, Tech had no College World Series appearances. The idea of getting to Omaha seemed so distant, and the chances of winning a national title seemed like a pipe dream. But after terrific pitching performances from Bryce Bonnin and Taylor Floyd Wednesday night, Tech is now two wins away from playing for a national title after beating Martin and the Seminoles, 4-1.

“I’m just really proud of Bryce Bonnin and Taylor Floyd,” Tadlock said. “Those guys threw the ball awfully well, and kind of gave us an opportunity to hang around and score some runs and plays good baseball. Those guys really went out there and threw the ball really really good.

In the back of your mind, obviously, you’re thinking about ’11’ a little bit, and all the respect in the world for him. I love him, and just appreciate everything he’s done for college baseball.”

But while the headliner this evening was Martin, it’s worth noting the Red Raiders made some history tonight as well. Texas Tech recently won a track championship and the basketball program made huge waves under the direction of Chris Beard this past season with a trip to the Final Four. Now, the Red Raiders are national semi-finalists in baseball for the first time in program history. Whatever is in the water out on the South Plains, we all should want some of it.

It’s a new era for Texas Tech athletics, that’s for sure.

Looking to stay alive in Omaha, the Red Raiders put the weight of an elimination game on the shoulders of righthander Bryce Bonnin. Bonnin spent last season at Arkansas, where he logged plenty of innings out of the bullpen. But he hardly had a significant role for the national runner-up Razorbacks. So, he transferred out to Texas Tech and earned a waiver to play this season.

Bonnin has had his fair share of ups and downs this spring, but there’s been one constant with him — fastball velocity. Bonnin made waves in the first inning when he punched out FSU two-hole hitter Reese Albert on a 97 mph fastball. The talented righthander was impressive most of the night.

Sure, Bonnin flirted with some command issues at times. But when he showed the slightest hint of working himself into trouble, he escaped the jam. For instance, Bonnin allowed a one-out walk in the second but got a pair of strikeouts to end the frame. He also allowed a base-runner with one out in the third before getting a pair of fly outs before FSU put two runners on with two outs in the fifth before Bonnin got a ground out to end the frame. In addition to being very effective with his fastball, the talented righty also showed a quality slider with some late breaking action. He struck out seven, walked four and allowed just two hits in five innings.

“He was in and out, probably really tough to hit, probably really tough to dig in, and he’d miss a little bit, and then he’d throw one in there on the outer third or the inner third,” Tadlock said about Bonnin. “I don’t think he missed a whole lot in the middle of the plate. The slider was good. I thought Matt [Gardner] did a good job with him, getting him in the zone when he needed to, and he’s had great mound presence since the day he stepped on campus. He’s a competitor. He’s a baseball player, a former shortstop, and he wants the ball.”

Speaking of wanting the ball, with Bonnin only going five innings, the Red Raiders had to rely on the bullpen to go the rest of the way. Taylor Floyd was up to the task. Floyd certainly has plenty of experience pitching in more than an inning of work and in big situations this season, but with the season on the line, the Red Raiders wanted to ride the hot hand the rest of the way.

Floyd, as usual, didn’t disappoint. The hard-nosed righty just destroys hitters with a filthy slide, while the fastball is impressive as well. His poise and hard-nosed demeanor on the mound also is a huge asset of his. Floyd threw a whopping 75 pitches out of the pen but pitched like an absolute bulldog for the Red Raiders.

The veteran righty ran into some trouble in the sixth when FSU put a pair of runners on base with one out. However, just like Bonnin earlier in the game, Floyd buckled down and escaped the jam with a pair of strikeouts. FSU once again tried to make a run in the seventh, leading off the inning with a base-runner. But Floyd got a strikeout and a double play to end the threat. His eighth and ninth innings were relatively effortless as he kept Tech’s season and national title hopes alive with four shutout innings out of the bullpen.”

“Yeah, I felt pretty good,” Floyd said. “Everything felt pretty good tonight. I think I was walking some people in some situations, not making pitches early in innings. But I was just staying with it and being able to bear down with runners on base, I think that was most important. And just getting our guys back to the dugout with a chance to score some runs. That’s all I was trying to do.”

With the win, the Red Raiders now have the ability to hit the reset button against Michigan. Yes, the Red Raiders must beat the Wolverines twice. But they get a chance to get the first win on Friday with freshman righthander and ace Micah Dallas back on the mound. And should the Red Raiders win that game? There’s a pretty good chance Caleb Kilian would be ready to start again on Saturday.

But for tonight, at least for Tech, it was all about staying alive in Omaha and making history for the Red Raiders athletics program.

Tadlock and his coaching staff have worked wonders during their tenure in Lubbock. They’ve gotten to Omaha a few times. Now they’re guaranteed to be one of the four teams left here playing for a national title.

It was an incredible night to celebrate everything about Florida State’s Mike Martin. It’s also a night to tip your cap to Texas Tech yet again.

Two more wins and Tadlock will earn another milestone.

One win at a time.