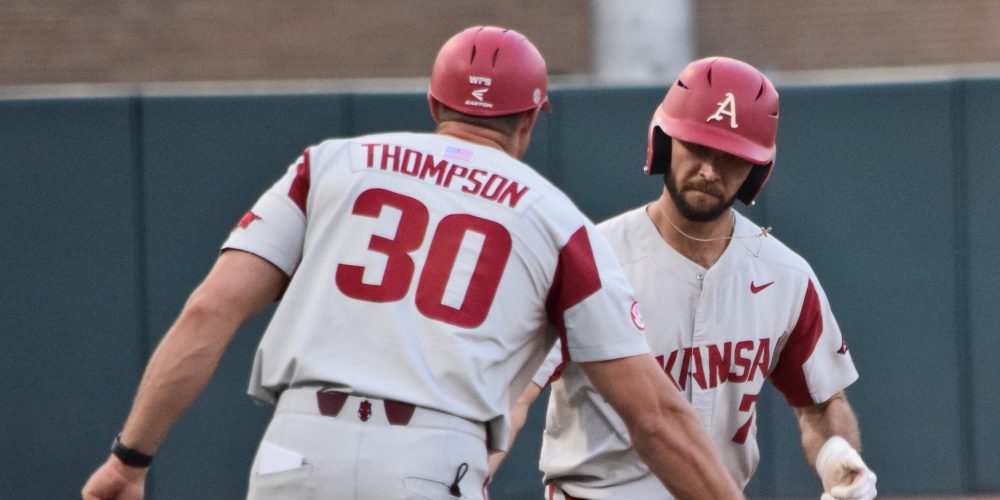 COLLEGE STATION, Texas — Dave Van Horn wasn’t sure what to expect this season.

He thought his team had a chance to be good. But, boy, did they lose some key cogs from last year’s national runner-up team — six position starters to be exact. All-American ace righthander Blaine Knight was tough to replace, and for the offense to continue its torrid pace, some guys would need to step up to help the three-headed monster of Heston Kjerstad, Casey Martin and Dominic Fletcher.

In essence, every box that needed to be checked for the Razorbacks to emulate last season’s success has systematically been checked as this season has progressed. And the Hogs continued their impressive ways Thursday night with a five home run performance and a 7-3 win over Texas A&M, which needs to win the final two games of the series to feel good about their hosting chances.

“I’m like a lot of people, you have to prove it to me,” Van Horn said. “We were playing six new starters in the field, two different conference starters on the mound, and last year’s team was just so experienced. This year’s team is loaded with guys who were with us last year but didn’t have opportunities.

“Those guys have all stepped up. They’re showing up and playing well pretty much every day,” he added. “This team isn’t scared. They have a knack to come back when we’re down and last year’s team beat you and won a lot of games, but they didn’t have to do that. This year’s team gets right back at you, and they don’t get down or get up tight. This is a fun group and you can tell they really like each other.”

From Isaiah Campbell being more consistent and dominant on the mound to the freshman duo of Connor Noland and Patrick Wicklander steadily improving in the rotation, along with the offense gradually getting better, this Arkansas team has the hallmarks of one that, yep, can win the program’s first national title.

One of the biggest additions since last season is Southeast Missouri State transfer Trevor Ezell. Ezell was one of those guys who consistently put up big numbers during his time at SEMO. But you always wondered, is he that good, or was he a product of the league he played in? Van Horn has always loved what he saw from Ezell, and when the graduate transfer received his release early last summer, the long-time Hogs skipper anointed him as the top priority on the recruiting trail. He was the perfect player to replace a departed utility guy like Carson Shaddy.

“When we were playing last year and having that long run in Omaha, I was calling him most every day. He was a big, big, get,” Van Horn said. “I told him on the phone when he decided to come here that he was our biggest recruit of the summer. I told him he might hit in the one or two-hole, but he was going to hit at the top of the lineup.”