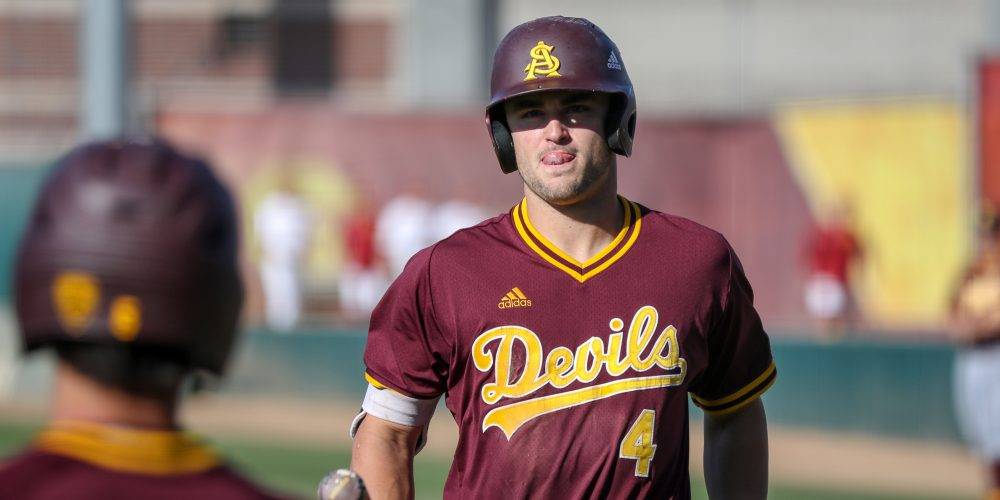 Hunter Bishop and Arizona State have a big weekend ahead. (Shotgun Spratling)

Off The Top Of Sorenson’s Head: May 10


Oh you guys are just too nice. Yes you, dear readers. You’ve all gone soft on me.

For some reason this 2019 college baseball season has been a little bit tame, relatively calm in fact. Not a ton of angst. In fact, my amount of hate mail has been very minimal so far this season. Usually I have Santa-sized bags of hate mail by this point in the season.

What do I have to do to change that? Should I write that all of your girlfriends and wives are fat and ugly? I mean I haven’t even had to go to my long-time calling card of saying “I hate all teams on the same level… except Creighton.”

You readers have been uncharacteristically nice. Guess this ain’t exactly college football is it? Ha. Man, you guys should’ve seen the rancor I got when I used to man the ESPN College Football twitter handle (@ESPNCFB) every Saturday for a couple of seasons. I got raked by some fan bases if I posted something nice about a team they were playing against. Then I got pounded by another because I posted something negative that happened in one of their games. Man, the truth hurts. And it gets ridiculous fans hacked freakin’ off.

I’m glad college baseball fans are nicer… well, usually that is. But I’m also sure your ire will get raised as we inch closer and closer to the post-season, especially when I start talking about Power Five teams who don’t deserve at-large bids in the NCAA Tournament. More on that in a bit.

First, let’s get to the matters at hand…

A few things that jumped out to me about the weekend ahead in college baseball.

– The postseason begins this weekend.
The Patriot League has concluded its regular season and now will have they top four teams pair up for a best-of three weekend. Top seeded Navy will host fourth-place Lafayette and Holy Cross will host Army, both of who finished tied at 15-10 in Patriot League play. Both series will be played Saturday and Sunday. Oddly, the Black Knights and Crusaders will play a doubleheader on Saturday and an “if-necessary” on Sunday. But the Midshipmen and Leopards are playing just one game on Saturday and then a DH on Sunday, if necessary.

Either way, it will be stunning if the Middies don’t come away with the PL title, especially since game one of each weekend would be a near-lock win with Noah Song on the bump.

– The SEC and its battles for home Regionals
I think we can all agree that Vanderbilt, Georgia, Arkansas and Mississippi State are all locks for home Regionals, unless a major tank job hits one of them. But Tennessee, Texas A&M, LSU, Auburn and Ole Miss are all bannering to play at home as well. So I’m keeping a keen eye on the Vols traveling to Florida, the Aggies going to Alabama, the Tigers playing at Arkansas, the Plainsmen hosting Georgia and the Rebels hosting Mississippi State in a rivalry weekend. Staying in the top three of each division will be a huge advantage for the postseason.