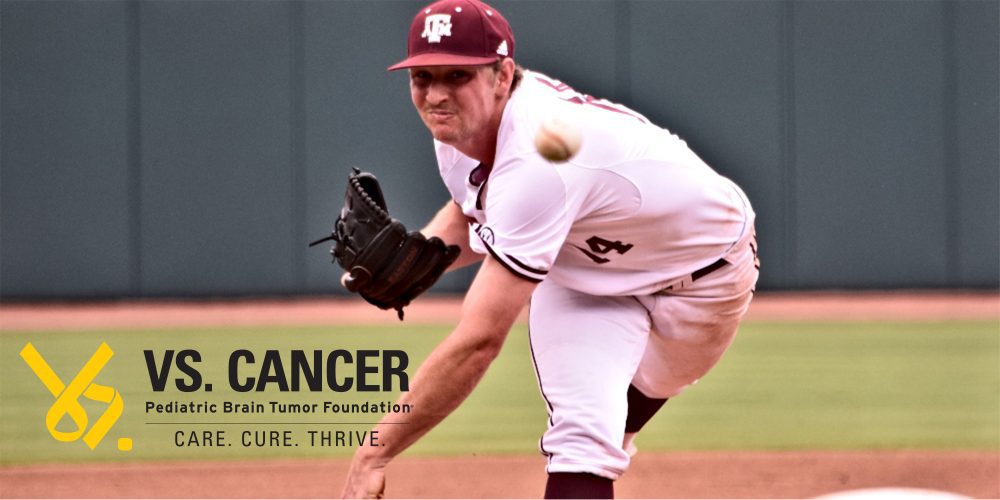 Texas A&M holds steady at No. 2 in the Vs. Cancer Top 25 for May, which lines up the top fundraisers for Vs. Cancer in college baseball

While teams from Power 5 conferences continue to dominate the top of the Vs. Cancer fundraising standings, two upstarts jump into the top five for May.

Vs. Cancer is a fundraising program of the Pediatric Brain Tumor Foundation. Teams in various sports use the Vs. Cancer platform to raise money, which goes to research and to help families dealing with cancer treatment. A former college baseball player created Vs. Cancer, and baseball remains the most important sport in its efforts.

To make more people aware of the work college baseball programs are doing for Vs. Cancer, D1Baseball brings you the Vs. Cancer Top 25. These are the top 25 fundraisers among college programs at all levels, for the current academic year. We update the results monthly, so these are the results through April. Collectively, the schools in the Top 25 have raised $231,564 for Vs. Cancer.

Several other new schools move into the rankings this month, led by Maryland, which jumps in at No. 8 after raising $9,675. Other schools new to the rankings are Trevecca Nazarene (Tenn.), Lynchburg (Va.), and Luther (Iowa).

Vs. Cancer: Born In College Baseball

In 2006, as an 18-year-old freshman baseball player at North Carolina, Chase Jones was diagnosed with a Stage IV brain tumor. His team rallied around him and raised money to support Jones and their local hospital. After that help and national research, Chase is now 10 years cancer-free.

After being successfully treated at UNC Lineberger Comprehensive Cancer Center, Jones started his own non-profit organization to raise money for pediatric cancer research and for the support of patients and families during treatment. In October 2016, Vs. Cancer became a signature fundraising campaign of the Pediatric Brain Tumor Foundation. Jones now serves on the foundation’s board.

Vs. Cancer serves as a fundraising platform for athletes in all sports, at the youth, high school, college and professional levels. But college baseball remains a primary focus, and college baseball teams are some of the most successful fundraisers. Teams host Vs. Cancer games to raise awareness among fans, and many players shave their heads to show support for the children they’re playing for. Vs. Cancer splits proceeds between programs at local hospitals and national pediatric brain tumor research.

If you don’t like where your favorite school is ranked, click on the school’s name to make a donation and move it up the rankings.

If you’d like more information on running a Vs. Cancer fundraising campaign, you can reach out to them now.