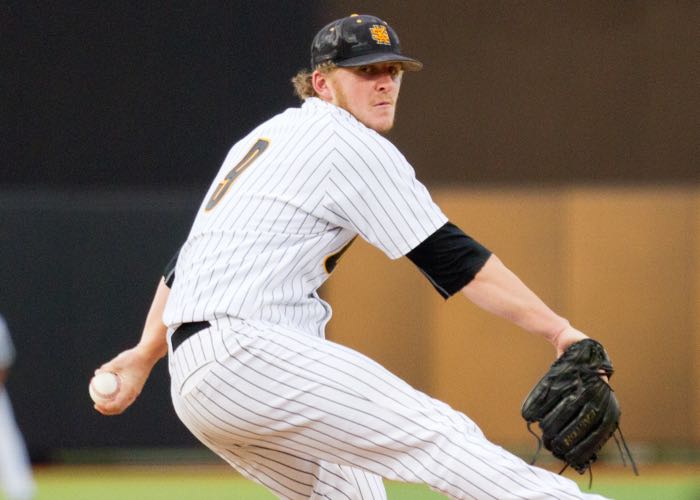 Bold indicates postseason team, and records are from 2014. Teams are listed in order of projected finish.

• Former Atlantic Sun power Mercer exited the league for the Southern Conference after finishing second in the A-Sun standings a year ago. East Tennessee State, which finished in the middle of the A-Sun pack last year, also bolted for the SoCon, leaving the Atlantic Sun as an eight-team league. Two of those teams (Kennesaw State and Florida Gulf Coast) look like clear regional-caliber clubs heading into the season, but the A-Sun’s other six returning teams finished an aggregate 68 games below .500 overall last year (133-201), dragging down the conference RPI and making the A-Sun a one-bid league. Clubs like Stetson, North Florida and Jacksonville look significantly improved, and if they can finish with winning records, this should be a multi-bid league. 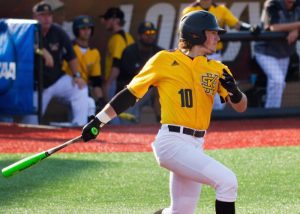 • After Kennesaw State came within two wins of reaching the College World Series in 2014, no one should be sleeping on the Owls heading into 2015. Certainly KSU will miss All-America catcher Max Pentecost (a first-round pick last year), bullpen ace Justin McCalvin (who recorded 16 saves and a 2.21 ERA) and athletic outfielder Bo Way, but this team still returns 22 letterwinners and the A-Sun’s premier weekend rotation. Pitching will be Kennesaw’s biggest strength, as RHP Jordan Hillyer and LHP Travis Bergen followed up their strong springs by earning Cape Cod League all-star honors last summer, proving they are among the nation’s best pitching duos. Tough as shoe leather, Hillyer attacks hitters with a heavy 89-92 fastball and a swing-and-miss slider with depth that he can throw in any count. Bergen is similarly competitive and fills up the strike zone with an 88-92 fastball and a 83-84 slider/cutter that serves as his out pitch. So. RHP Gabe Friese gives this outstanding rotation a third strike-thrower who commands three pitches, highlighted by a fastball that bumps 93. Freshman RHP A.J. Moore, one of the conference’s top newcomers, has a chance to become a first-round pick by the time he’s a junior, as he already flashes 94 mph heat and a power slider that reaches 86. With McCalvin and James Connell gone, the Owls will lean on a trio of lefties with good stuff to anchor their bullpen: Will Solomon, Chris Erwin and Will Lowman. Erwin is a two-way player who might also be the team’s best pure hitter, with advanced bat control and a mature all-fields approach. But Jr. OF Alex Liquori (.354/.417/.500) is the centerpiece of the lineup thanks to his combination of above-average speed and emerging pop. The league’s best prospect, slick-fielding SS Kal Simmons, teams with lightning-quick 2B Cornell Nixon to form an elite middle-infield duo, highlighting a defense that should be outstanding. The college baseball world discovered just how dangerous these Owls are when they became the nation’s hottest team down the stretch last year, winning a school-record 16 straight games en route to a school-record 40 wins and the program’s first super regional appearance. This year’s Owls could be even better.

• Florida Gulf Coast won 39 games and the A-Sun’s regular-season title last year, but the Eagles were left out of the NCAA tournament after losing to Lipscomb in the conference tournament. They return a balanced, talented roster with athleticism, hitting ability and a deep collection of quality arms. Reigning A-Sun pitcher of the year Michael Murray gives FGCU a marquee ace with uncommon command of his 88-91 fastball and three quality offspeed pitches. Veteran RHP Brady Anderson, who led the team with seven saves last year, assumes the Saturday starter job and has good late life on his 88-91 fastball along with solid depth on his 78-80 slurve. Senior Nick Deckert and freshman Devin Smeltzer give this staff two talented starting options from the left side; both have sharp power curveballs and feel for changeups, and Smeltzer can run his heater up to 93. A major key will be whether juco transfer Jordan Desguin and fifth-year senior Alex Diaz (who started 56 games as a position player last year but did not pitch) can anchor the bullpen. Both have quick arms and can reach 93 mph or a tick better. The FGCU lineup is led by Jake Noll (.367/.416/.440, 25 SB), last year’s A-Sun freshman of the year. A natural hitter with athleticism and defensive versatility, Noll will move from second base to third as a sophomore, with slick defender Matt Reardon assuming the second base job. The Eagles have plenty of team speed and should be able to push the action on the basepaths, while juniors Nick Rivera and Colton Bottomley (who had six homers apiece last year) provide some punch in the middle of the lineup.

• Eight junior-college transfers and seven freshmen infused Stetson’s roster will renewed energy in the fall, but the Hatters also have a nice core of returning veterans—they could start eight upperclassmen in the everyday lineup, including three juco transfers. Two of those transfers, 1B Will MacKenzie and toolsy CF Cory Reid, provide intriguing raw power and should help protect Jr. C Patrick Mazeika (.354/.479/.471), a physical run producer with innate feel for hitting from the left side and solid catch-and-throw skills. Another newcomer, Fr. LHP Ben Onyshko, was a 16th-round pick by the Brewers last year and features a fastball that can reach the low 90s along with advanced feel for his downer curveball and changeup. But the staff ace is So. RHP Mitchell Jordan, who dominated the New England Collegiate League last summer with a tailing fastball that reaches 92 and a tight slider. The Hatters also feature a pair of power-armed righties at the back of the bullpen in fourth-year junior Tyler Warmoth and juco transfer Walker Sheller, who both can reach 93.

• Lipscomb welcomes back the bulk of a club that finished fourth in the A-Sun last year then reached the conference tournament finals before falling to Kennesaw State. The Bisons’ leader is Sr. SS Grant Massey, who led the team in the triple-slash categories (.322/.427/.463) as well as doubles (19) and stolen bases (14) last year. He is a disciplined hitter with a knack for getting on base, but he also anchors the defense thanks to his steady hands and accurate arm. The Bisons are a fundamentally sound team who make the routine plays on defense and execute on offense, but they aren’t blessed with exceptional offensive firepower. Look for brothers Josh and Adam Lee (whose brother Ben also plays for the Bisons and whose father teaches at Lipscomb) to help Massey carry the offensive load. Soft-tossing strike-thrower Ian Martinez (9-3, 3.77), who throws an improving knuckle ball, will lead a rotation that also features an intriguing lefty in Nick Andros. Six-foot-4 senior Griffin Moore, who played first base and DH last year, has been moved to the mound and could anchor the bullpen with a fastball that can consistently hit 95, according to the coaching staff.

• North Florida ranked 12th in the nation in batting last year, but national batting champion Drew Weeks (.430) is gone. Redshirt sophomore OF Donnie Dewees isn’t a bad bet to lead the conference in hitting this year, as he ranked fifth in the Cape Cod League with a .340 average last summer while showing plus speed and good instincts on both sides of the ball. He missed all but 12 games last spring due to injury, and the Ospreys will count on him to lead a lineup that also includes a pair of formidable power hitters in Trent Higgenbothem and two-way player Corbin Olmstead, a duo that combined for 16 homers last year. Juco transfer Keith Skinner, who hit .402 last year for Seminole State JC, figures to step into the starting catcher job and could provide additional pop. On the mound, UNF is led by the Atlantic Sun’s most heralded freshman in RHP Brad Depperman, who could jump right into the Friday starter job thanks to an 89-92 fastball that touches 94 with late life, a power slider and a sharp mid-70s curve.

• After Jacksonville overhauled its roster with a strong recruiting class this fall, coaches in the region said they expect the Dolphins to be considerably better than they were in 2014, when they finished 21-33 overall. A group of quality junior-college transfers should make a huge impact. One of them, LHP Casey Kulina, led Florida juco pitchers in wins last year at Polk State (12-1) and should step right into Jacksonville’s Friday starter spot thanks to his mature mound presence and ability to throw four pitches for strikes. A second JC transfer, OF Austin Hays, ranked as the top prospect in the Florida Collegiate Summer League last year and features an intriguing blend of power, speed and arm strength from the outfield. A third transfer, 2B Jordon Gould, upgrades the middle-infield defense thanks to his smooth actions and sure hands, and he also brings a nice gap-to-gap stroke. The centerpiece of the lineup is 1B Connor Marabell (.371/.440/.539, 5 HR), who has a sweet lefthanded swing and emerging power potential. Gritty 5-foot-7 spark plug Parker Perez will help make the offense go while also playing good defense in center field and contributing off the mound. Pitching remains a question mark for the Dolphins, but they have enough speed and power to generate enough offense to keep them competitive. They also have a good closer in So. RHP Nathan Disch, who attacks hitters with an 89-92 fastball and mixes in two secondary pitches. If freshman RHP Michael Baumann (no relation to D1Baseball’s staff writer of the same superb name) can mature quickly, he could make a big difference. His velocity jumped 8 mph in the past year, and he now flashes 93 mph heat with arm-side run.

• South Carolina-Upstate and Northern Kentucky struggled mightily a year ago, going a combined 12-41. Pitching remains a question mark for the Spartans, but the lineup should be productive thanks to a nice group of four newcomers joining an experienced core of returnees. The outfield is all new, with junior-college transfers James Fowlkes (the team’s best prospect thanks to his power/speed blend) and Cody Brittain (who can also run his fastball up to 91 off the mound) joining freshman J.J. Shimko (who brings intriguing lefthanded power potential). Upstate also expects a big contribution from juco transfer 3B

Jake Beaver, another lefthanded hitter with good plate discipline. The Norse, meanwhile, figure to take plenty of lumps with a young team that includes 19 newcomers. Pitching will be a major challenge for Northern Kentucky, but the lineup has a pair of dangerous upperclassmen in Sr. CF Cole Baumi (.337/.373/.567, 7 HR) and fourth-year junior 1B Cody Kuzniczci (.286/.329/.438, 6 HR).