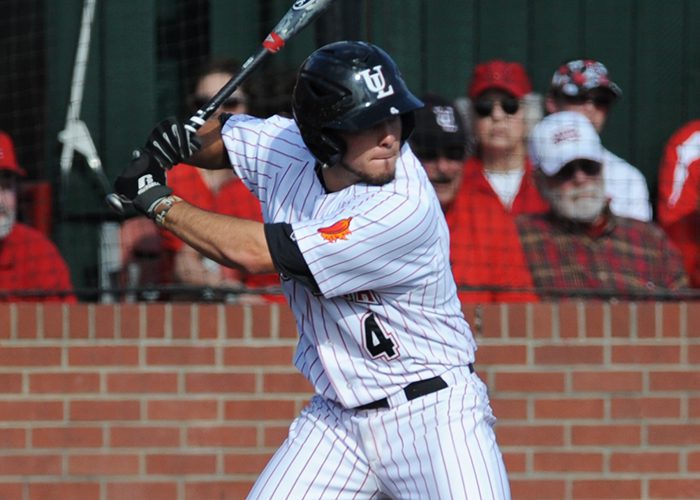 Bold indicates projected regional team, and records are from 2014. Teams are listed in order of projected finish.

Louisiana-Lafayette turned in a terrific 2014 campaign, winning the Sun Belt regular season and tournament titles en route to a Regional host and national seed. SS Blake Trahan (.355/4/49), who has smooth hands, great instincts and a good arm, is back along with 3B Tyler Girouard (.324/3/32), and 1B Greg Davis (.314/3/23).  The pitching staff lacks experience but has potential. Greg Milhorn (5-2/7.12) is back after making six starts last year. Freshmen Evan Guillory and Gunner Leger are rotation candidates along with Will Bacon. Colton Lee and Reagan Bazar (4-0/2.27) are the top relief options. Bazar is a particularly interesting pitcher to watch this season. Bazar has a premium arm with the ability to get into the upper 90s. However, command has been a concern in the past, and he must shore that up to take the next step as a prospect.

Troy slipped in 2014 and missed out on the postseason. They look to bounce back in what will be head coach Bobby Pierce’s final season before handing the reigns over to top assistant Mark Smartt. The Trojans have some weapons offensively as DH David Hall (.344/9/48), 1B Trevin Hall (.263/7/30), 2B Nick Masonia (.243/6/29), OF Clay Holcomb (.262/1/9) and OF Jo-El Bennett (.269/6/25) all return. Watch out for freshman shortstop Matt Sanders who has a chance to hit leadoff.  Troy feels their team strength should be their pitching staff.  Freshman righty Corey Childress is expected to be the first freshman pitcher starting on opening night in the Pierce era. Childress sits anywhere from 86-91 with his fastball, while also possessing good secondary offerings in a slider and changeup. Righties Lucas Brown and Grant Bennett should also be starters along with former Florida pitcher Tucker Simpson. Marc Skinner (6-1/1.52) returns as one of top closers in the south, sitting just 86-89 mph with his fastball, but possessing an improved curveball and a hard-nosed, attacking, attitude.

Georgia Southern moves over to the Sun Belt from the Southern Conference after winning an automatic bid and shocking Florida State in the opening game of the Tallahassee Regional. The Eagles return some veterans like outfielders Aaron Mizell (.309/13/53) and Kody Adams (.301/5/28), infielder Dalton Busby (.274/4/43), first baseman Ryan Cleveland (.253/6/31), and catcher Chase Griffin (.258/3/41). Missile is quite an intriguing player and prospect to watch. He’s not a big guy, but has good bat speed, power and overall, just very good makeup. Meanwhile, Busby is finally healthy and could play either position up the middle, while Griffin is a key leader, durable behind the plate, and has good overall arm strength. The pitching staff gets a boost with the return of LHP Evan Challenger who missed 2014 with Tommy John surgery. Chattahoochee Valley CC transfer RHP Chris Brown, RHP Ryan Frederick (4-1/3.88), and freshman LHP Connor Simmons are also in the rotation plans. Sidearm southpaw Jason Richman (5-1/1.20) and Tripp Sheppard (1-1/5.23) lead the bullpen. Brown is a quality juco arm to watch, sitting anywhere from 88-92 mph with his fastball during the fall, along with a good changeup and quality breaking ball. Sheppard is another physical, power arm, with the ability to get up to 92, along with improved secondary stuff.

South Alabama took a step back last season after a top 25 campaign in 2013. Mark Calvi’s club looks to be back in contention in 2015 with a more explosive offense and a deep bullpen. The staff is excited about freshman catcher Jared Barnes and JC transfer 1B Daniel Martinez. They also get OF Cole Billingsley back who was redshirted last year with an injury. Holdovers from last season include third baseman Bud Collura (.297/0/8), outfielder Cole Gleason (.333/3/33), and shortstop Drew Labounty (.237/0/21). The rotation has Kevin Hill (4-5/4.70), JC transfer lefties Shane McKinley and Joey Jones and freshman southpaw Zac McMullen. Hard throwing Justin Flores (JC transfer) and Ben Taylor (3-5/5.54) lead a deep pen. Collura and OF Garrett DeGallier both have good speed with 6.6 and 6.7’s, respectively, while the Jaguars like the defensive skill set of Labounty, who also had a good fall with the bat.

Appalachian State moves over to the Sun Belt from the SoCon and should bring an impressive offensive attack with it. Shortstop Dillon Dobson (.299/11/39) figures to be one of the league’s best players. He joins second baseman Michael Pierson (.343/7/33) in the middle infield. Newcomers Connor Leonard, Grayson Atwood, and Noah Holmes (sat out 2014 with injury) man the corners and DH. Jaylin Davis (.280/4/35) is an improving outfielder flanked by Tyler Stroup (.265/3/25) and two-way player Matt Brill (.306/4/20). The pitching staff is the question coming into the season with Jeff Spring (2-5/5.06), Dallas Devrieze (1-4/4.76), Brian Bauk (OF in 2014), and Sean Mason (1-2/6.84) as rotation options. Robert Whaley (3-1/1.98) and Taylor Thurber (1-7/4.60) are late game stalwarts. Dobson is a very good athlete with plus power potential, while Davis is a terrific athlete with plus power. He has power to all fields and continues to fine-tune an advanced approach. Davis is coming off a terrific summer for the Santa Barbara Foresters of the California Collegiate League.

Georgia State will again lean of their offense as they build more success on the mound. Two-way player Matt Rose (.312/11/34) should be the top offensive weapon along with catcher Joey Roach (.301/3/23), outfielder Ryan Blanton (.238/3/13), outfielder Trae Sweeting (.333/1/7), and infielder Caden Bailey (.283/1/26). Freshman shortstop Justin Jones has been impressive. 6-foot-7 RHP Nathan Bates (1-3/3.76) and LHP Kenny Anderson (5-5/6.27) have a chance to be a solid 1-2 punch atop the rotation. Transfer Cole Uliva and LHP Wayne Wages (0-1/7.77) are also rotation possibilities. Kevin Burgee (3-1/2.97) is a good closer and transfer Clayton Payne adds another late game option. Rose had a terrific summer at the Valley League, earning top prospect honors there. He has good power, is a terrific defender on the left side of the infield, and also possesses a strong arm. As a matter of fact, you could see Rose pitch some innings for the Panthers this spring.

Louisiana-Monroe should be improved after an 11-19 SBC season a year ago that included a mid-season coaching change. Bruce Peddie is now the head coach and has some talented transfers in first baseman Danny Springer and outfielder Nathan Pugh, who should boost the lineup. 3B Keelin Rasch (.289/4/30) , SS Kodie Tidwell (.284/1/27), and OF Justin Stawychny (.279/7/37) are the top returnees. Brandon Bell is back after Tommy John surgery to lead the rotation. Alex Hermeling (2-5/5.99), Chris Hunt (2-5/5.43), and Josh Leone (3-3/8.18). Addison Cater (Hinds CC transfer) and Trey Setzer (TJ surgery) are bullpen additions. Rasch has a lot of upside for the Warhawks. He’s coming off a strong summer at the Northwoods League, where he showcased a good arm with the ability to hit well in the middle of the lineup.

To view our Top 10 Prospects lists for the 2015 and ’16 draft classes, as well as our 5 Impact Freshmen, sign up for a D1Baseball.com subscription..