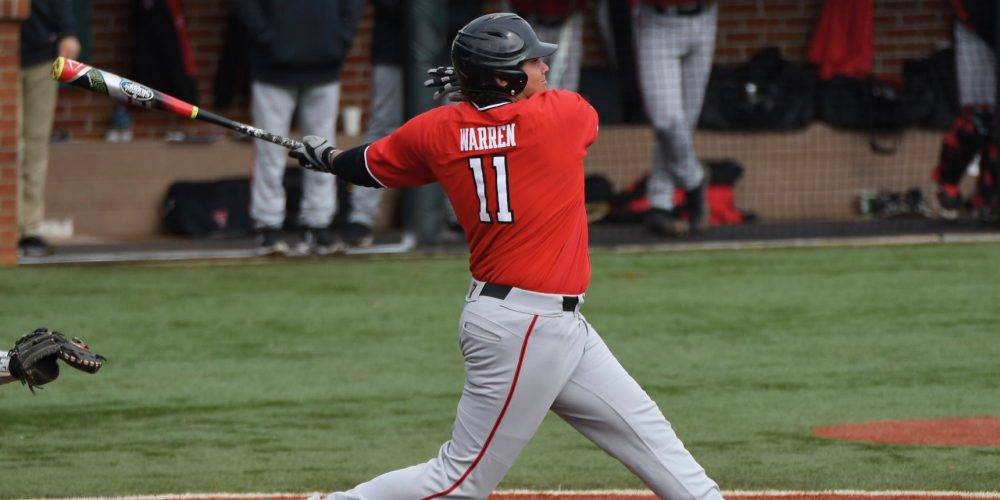 The Gators entered the weekend needing a sweep over Missouri to keep their postseason hopes alive, and they got exactly what they were looking for in a 4-3 win over the Tigers. UF’s Nick Pogue struck out six, walked one and allowed three hits in 5.1 innings, while Christian Scott was solid out of the bullpen with four strikeouts in three innings of work. UF now heads to the SEC tournament with a 13-17 league record.

The Aggies needed a series win over Arkansas to keep their hosting hopes alive, and they got it done in impressive fashion Saturday afternoon with a 6-1 triumph. A&M righthander Christian Roa struck out seven, walked one and allowed a run and five hits in six innings, while Joseph Menefee tossed two shutout frames out of the pen. Ty Coleman knocked in two runs for the Aggies. A&M really helped its hosting status this weekend but needs to keep that momentum going into the SEC tourney.

Aggie pitchers have logged 600 strikeouts for just the second time in school history.

The Hurricanes finished off the regular season in impressive fashion, taking a home series from Duke with a 5-1 triumph Saturday afternoon. Chris McMahon was terrific on the mound, striking out six and allowing just one hit in five innings, while Anthony Vilar, Raymond Gil and JP Gates each had two hits. Miami finishes ACC regular season play with 18 conference wins, which should be enough to grab a host site.

The Pack likely put itself in solid hosting shape Saturday afternoon with a dominant 11-0 win over North Carolina to take the series from their rivals. NC State’s Evan Edwards had an afternoon to remember, going 3-for-5 with two RBIs, while Patrick Bailey had two hits and two RBIs. J.T. Jarrett knocked in two runs and Devonte Brown had a two-hit performance. NC State heads to the ACC tourney with 18 conference wins.

This one's for you, Bruce. pic.twitter.com/ZERXi905NR

The Red Raiders captured yet another Big 12 Conference regular season championship with an 8-4 win over TCU. Cam Warren had a strong night at the plate, going 3-for-5 with a triple, while Braxton Fulford had two hits and four RBIs and Dylan Neuse chipped in a two-hit, two-RBI performance. Texas Tech was a national seed in last week’s projections and should stay put early next week.

The Knights had to take care of business against Houston this weekend to stay in the postseason discussion, and Greg Lovelady’s club did what they needed to do in an 11-10 extra-inning win over the Cougars. The two teams were tied at 10-10 in the bottom of the 11th before Brandon Hernandez smacked a walk-off single to win the game. UCF is still two games below .500 in the American, but it is certainly trending upward entering the American tournament.

The Chippewas had an afternoon to remember after they defeated Miami (Ohio) 10-3 to clinch the MAC regular season championship. Zach Gilles and John Sullivan each had two hits and two RBIs, while Chase Rollin also had a performance to remember. CMU’s Jordan Patty struck out four, walked one and allowed a run and five hits in 6.2 innings. The win over Miami was CMU’s 15th straight overall and 14th in a row in the MAC.

The Rattlers became the first team to punch their ticket to the NCAA tournament Saturday night with an 8-1 win over Norfolk State, this after beating the Spartans 5-4 earlier in the day. FAMU’s Kyle Coleman had a special start against NSU, striking out nine, walking one and allowing just one run and six hits in a complete game performance. This is FAMU’s second trip to the NCAA tourney, with the last coming in 2015.

So proud of this group! What an effort this week. NCAA Tournament bound!!! pic.twitter.com/Owvq4zgpKs

It might be Jeff Mercer’s first season in Bloomington, but he has made quite the first impression, beating Rutgers 13-3 Saturday afternoon to win the Big Ten regular season crown. IU starting pitcher Andrew Saalfrank struck out six, walked one and allowed three runs in six innings, while Gabe Bierman was terrific out of the pen, striking out four and allowing just two hits in three shutout innings.

Congrats to @IndianaBase players for winning the Big Ten today. Great job by @JeffMercer54 and his staff!! Special day for those players and fans.

The Seminoles are making things interesting from a postseason standpoint, getting blown out, 10-0, by Louisville Saturday afternoon to lose the series. FSU starting pitcher Conor Grady allowed four runs in an inning of work and the rest of the game didn’t go any better. Louisville’s Bobby Miller tossed six shutout frames and freshman Alex Binelas put together a two-hit, two-RBI performance. FSU will need to take care of some business at the ACC tournament to feel safe.

After taking a step back against Michigan State last weekend, the Hawkeyes needed to step up in a big way on the road against Maryland. Iowa didn’t do that, getting swept by the Terps, including a 10-8 setback on Saturday. Grant Judkins allowed four runs and three hits in three innings, while the bullpen also struggled. Iowa has now lost five straight games and is down to 95 in the RPI. In other words, the Hawkeyes now need to win the Big Ten tournament.

Scott Berry’s club suffered a big blow this weekend with a home series loss to UAB, losing 13-10 in the series finale. USM starting pitcher Cody Carroll allowed five runs and seven hits in 3.1 innings, while J.C. Keys and Mason Strickland each allowed three runs. USM is down 15 spots in the RPI to 56 and likely needs to do some work in the Conference USA tournament to reach the postseason field.

The Aztecs entered the weekend at least in the discussion for an at-large bid, but their chances took a huge hit after dropping a home series to New Mexico with a 7-4 setback. Jacob Flores allowed three runs in two innings, while UNM’s Nathaniel Garley put together an impressive performance, striking out three, walking two and allowing a run and six hits in eight innings. SDSU’s RPI is down to 66, which is a 10-spot drop from last week.