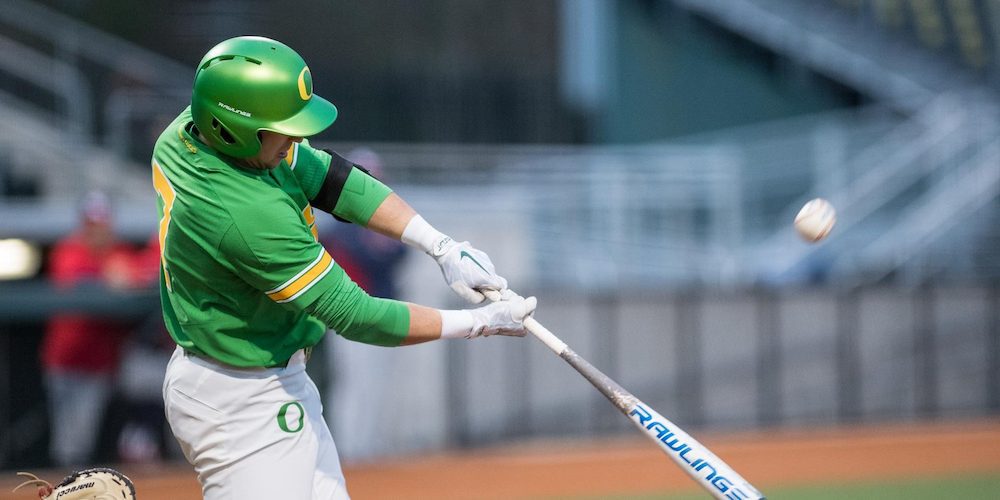 The final Opening Day of Mike Martin’s illustrious career will go down as perhaps the most memorable Opening Day of his four-decade tenure at Florida State. Three FSU pitchers combined to throw the 10th no-hitter in program history, as the Seminoles blanked Maine 11-0. First-team preseason All-American kicked it off with five hitless frames, allowing just one walk while striking out five to earn the win. Conor Grady followed with three innings (allowing one walk), and Chase Haney finished it with a hitless ninth.

Florida State secures a no-hitter in the first victory of the season. pic.twitter.com/VPLH32OrKe

“This was so much fun,” Martin said afterward. “It’s very special. The closest thing that I think we’ve come to a no-hitter on Opening Day was us getting one-hit … It was a great memory tonight.”

Parrish, who was on a soft pitch count and exited after 65 pitches, certainly appreciated being a part of the latest memorable win in Martin’s career.

“I mean, the guy’s been around baseball longer than I’ve been alive two times in a row,” Parrish said, per Seminoles.com. “For him to say that, after all he’s seen, all the great players he’s coached, it’s just something you’re going to remember for the rest of your life.”

At the Angels College Classic, Stanford ace Brendan Beck twirled a gem to outduel Ball State’s Drey Jameson in a 2-1 affair. Jameson was superb — he threw six hitless innings, allowing just one unearned run and two walks while striking out nine. Jameson attacked with power stuff, running his fastball into the mid-90s. Beck has a different style, with impeccable command of a high-80s fastball and the ability to mix four pitches effectively — which he did exceptionally well on Friday. Beck allowed just one run on four hits and no walks while striking out 11 over 6.1 innings to earn a no-decision. Stanford broke a 1-1 tie on Will Matthiessen’s RBI single in the seventh.

Fifth-ranked UCLA got a stiff test in its season opener against St. John’s, but the Bruins overcame a one-run deficit with two in the seventh to win 3-2. Chase Strumpf and Matt McLain drew bases-loaded walks to push across UCLA’s two runs in the seventh, helping the Bruins win despite mustering just five hits against preseason All-American Sean Mooney and the St. John’s bullpen. With ace Ryan Garcia sidelined by injury, UCLA sophomore righty Zach Pettway (6 IP, 3 H, 2 R, 0 ER, 0 BB, 9 K) turned in a strong start in a no-decision, and three relievers followed with one scoreless inning apiece.

When’s the last time you saw an extra-innings game with a final score of 27-11? I’m guessing never. Illinois State battled back from a seven-run deficit at Belmont to tie the score 10-10, and the two teams traded runs in the ninth to force extras. After a scoreless 10th, the Redbirds exploded for 16 runs in the 11th inning to win a wild one. Joe Butler, Tyson Hays, John Rave and Joe Aeilts each drove in three or more runs for the Redbirds, led by five RBIs apiece from Butler and Hays. Belmont contributed to its own demise by issuing 15 walks to go along with ISU’s 16 hits. The 11th was not exactly a masterpiece, as the Bruins walked seven, hit three batters and committed three errors in the frame. But at least they stranded the bases loaded.

In one of the best under-the-radar matchups between mid-major powerhouses Friday, Dallas Baptist won a crisp 3-0 duel against Kent State. Jordan Martinson dealt for the Patriots, allowing just one hit and two walks while fanning seven over six scoreless frames. Jarod Bayless followed with three innings of one-hit ball to preserve the shutout. The Patriots mustered just four hits of their own, but the pushed across a couple of unearned runs against Kent State ace Connor Wollersheim, and that proved to be enough run support for the DBU arms.

We’ll see how the rest of the weekend transpires for the Ducks, but wow, what an Opening Day for the program in a dominant 9-4 win over the No. 3 Red Raiders. UO stud starting pitcher Kenyon Yovan only went two innings against the Red Raiders, but the Ducks’ offense picked up the slack in the win, banging out 15 hits and touching up usually reliable Tech starting pitcher Caleb Kilian for six runs on six hits in 3.1 innings. Aaron Zavala had a pair of doubles and three hits to lead the way for UO, while Tanner Smith also had three this and Spencer Steer chipped in a two-hit performance. Even more impressive about this win is how aggressive Oregon was on the base paths. UO wore out the Red Raiders, swiping nine total bases with four players recording two stolen bases. It was a nice start to the season for UO, but now it must build off the Opening Day victory. Oregon hasn’t reached the NCAA Tournament since 2015, so this could be a momentum turning victory depending on how the rest of the weekend goes.

2. No Feole, No Problem for Connecticut

The Huskies are down in the Sunshine State this weekend to face Louisville in a three-game series. Well, UConn received bad news earlier this week when lefthander Mason Feole was scratched from his weekend start as he continues to battle back from some soreness. Simply put, the Huskies want him to regain his full arm strength and not put him at any risk for at least the next couple of weeks. The Huskies didn’t need him Friday afternoon in a 3-2 win over Louisville. As we mentioned in the Weekend Insider, the Huskies still entered the weekend with plenty of solid and experienced arms. Righthander Jeff Kersten has had success and was solid against the Cardinals, walking three and striking out two, while also allowing just a run on five hits in six innings. Meanwhile, UL starting pitcher Reid Detmers struck out three, walked three and allowed just four hits in five innings. It was a quiet game from an offensive standpoint, but Anthony Prato and Pat Winkel led the charge with a pair of hits each. UConn still needs to take another game this weekend to win the series , and should it do so, it would be a massive boost for the American Athletic Conference the rest of the spring.

Several programs ushered in new coaches on Friday, and while some experienced setbacks, the Hurricanes had one heck of a night to celebrate DiMare, their new skipper. The Hurricanes touched up Rutgers starting pitcher Serafino Brito for seven runs and seven hits in two innings en route to a dominant 19-3 victory. Freddy Zamora had a night to remember for the ‘Canes, smacking a home run, while also slugging a pair of doubles. Talented freshman Adrian Del Castillo also had a big night at the plate with three hits and three RBIs, while Alex Toral hit a home run and Willy Escala recorded a pair of hits and knocked in three runs. While the offense led the way in this one, righthander Evan McKendry also put together a strong performance on the mound, striking out eight, waking one and allowing three runs (two earned) on four hits in six innings. The Hurricanes should be able to take care of business against RU the rest of the weekend, while next weekend’s series at Florida will be the ultimate measuring stick for DiMare’s club.

Louisiana scuffled last season without Leger in the weekend rotation because of an injury. Well, the decorated Cajuns lefthander returned to the rotation Friday night against Texas and didn’t get much help against David Pierce’s new-look Longhorns. Leger was solid against the ‘Horns in a 3-1 setback in 10 innings, striking out four, walking two and allowing two hits in five shutout innings. He was overshadowed by Texas righthander Bryce Elder. Leading up to the season, the Longhorns appeared to be set for a weekend rotation consisting of Blair Henley, Cole Quintanilla and potentially fab freshman righty Coy Cobb. However, Elder impressed the coaching staff in January and not only earned a spot in the rotation, he snagged the ace spot. You saw why on Friday, as he dealt against the Cajuns, striking out nine, not allowing a walk and allowing just four hits in eight innings. Elder’s rise could be a huge development for the Longhorns, who are without Kody Clemens’ services this season. UT’s offense scuffled against the Cajuns, but a bright spot was Austin Todd’s performance. Todd had injury issues last season, but had three hits and two RBIs in the opener. Tonight was all about Elder, though.

The anticipation around Starkville was high leading up to Opening Day. After all, the Bulldogs had to walk around a construction zone to go to games last season. But, boy, was it worth it. MSU athletic director John Cohen and the university unveiled the grandest ballpark in college baseball, the new Dudy Noble Field, which seats north of 12,000 spectators and ends with a price tag north of $60 million. MSU showed off the new left field condos earlier this week. Let’s just say we’re pretty impressed. Well done, Bulldogs.

As for the action on the field, the local boys took care of business in a 14-3 win over Youngstown State. Junior lefthander Ethan Small shined in his season debut, striking out 11, not allowing a walk and allowing just two runs on three hits in five innings. Tanner Allen and Elijah MacNamee each hit home runs and combined for seven RBIs, while shortstop Jordan Westburg had a huge day at the plate, too, with four hits and two RBIs.

But tonight, let’s be honest, was all about the ballpark.