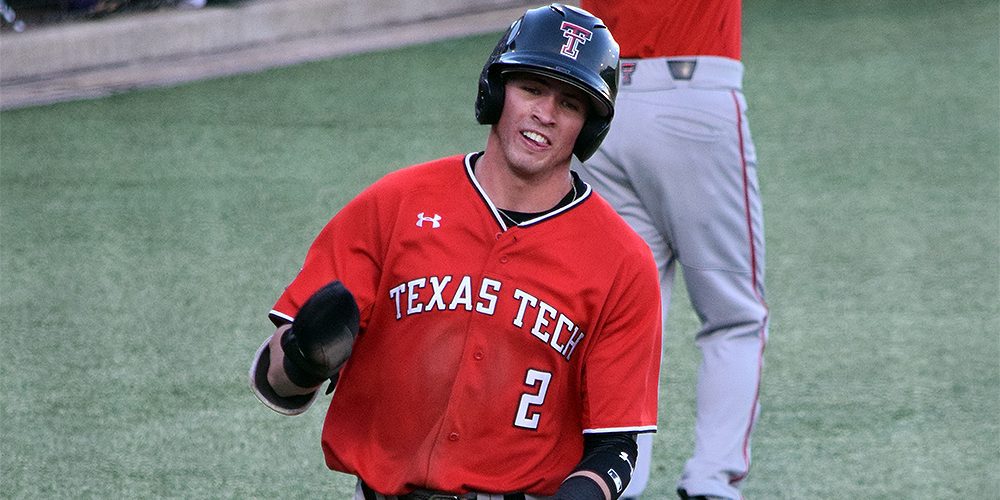 Texas righthander Blair Henley had a short outing Saturday at Louisiana, allowing four runs in just two innings of work — but the UT bullpen picked him up in a big way. Four relievers — Cole Quintanilla, Tristan Stevens, Owen Meaney and Nico O’Donnell — combined to work seven outstanding innings of relief, allowing just one unearned run in the ninth. Texas scored five runs in the second and held on for a 6-5 win to clinch the series. Three freshmen came up big for the UT offense, as Lance Ford, Eric Kennedy and Bryce Reagan each had an RBI and a run, while combining for five hits. The Cajuns figure to be major contenders in the Sun Belt, so this should prove to be a big road series win for Texas, which will go for the sweep Sunday.

Oregon State’s Bryce Fehmel has carved out quite a college career by carving up opposing lineups for three-plus years now. The senior righthander doesn’t overpower with velocity and has never come close to striking out a batter per inning, but few college pitchers are as adept at mixing speeds and locations, pitching to contact, and winning. Fehmel picked up in 2019 right where he left off in Omaha, twirling eight innings of one-hit ball in OSU’s 9-3 win against Gonzaga in Surprise, Ariz. It was vintage Fehmel: he struck out just three batters in eight innings but did not issue a walk and held the Zags to one run. It was his 27th career victory, moving him into a tie for eighth place on OSU’s all-time wins list. Adley Rutschman and Beau Philip homered in support.

Georgia Southern evened its road series at No. 22 Auburn with a 7-5 win in 13 innings. Noah Ledford (2-for-5) hit a tie-breaking solo homer in the 13th, and the Eagles tacked on another run on a wild pitch. Austin Thompson (3-for-6, 2 R, 2 RBI) paced GSU’s 12-hit attack, as the Eagles erased a four-run deficit after five innings.

In a more surprising upset, No. 18 Oklahoma State was knocked off by UT Rio Grande Valley, 5-2. UTGRV jumped out to a 4-0 lead through two innings, highlighted by a two-run homer by Oregon State transfer Andy Atwood. Trevelle Hill (5 IP, 5 H, 2 ER, 2 BB, 7 K) turned in a strong start to earn the win, and Gabe Constantine and Ryan Jackson combined for four innings of one-hit, shutout ball in relief. I wrote in the fall that strikeouts were an issue for the OSU offense — and the Cowboys fanned 16 times in Saturday’s loss.

Minnesota righty Patrick Fredrickson was as consistent as they come during his Freshman All-America 2018 campaign, going 9-0, 1.86. But Saturday he did something he’d never done at the collegiate level: he took a loss. New Mexico hung five runs on Fredrickson (just two earned) over four innings and cruised to an 11-1 win in Surprise. The UNM offense cranked out 15 hits, led by star center fielder Jared Mang (4-for-5, 4 RBI) and right fielder Tanner Baker (4-for-5, 2 RBI). Meanwhile, Nathaniel Garley (7 IP, 3 H, 1 ER, 3 BB, 6 K) and two New Mexico relievers combined on a four-hitter.

Miami first baseman Alex Toral was one of the most high-profile recruits in the country last year, and his .161/.322/.237 freshman campaign was quite a shock. But through two games in 2019, Toral already has twice as many home runs (two) as he hit all of last season. Toral went deep for the second game in a row in Miami’s 7-1 win against Rutgers Saturday, helping fellow high-profile sophomore Chris McMahon (5 IP, 3 H, 1 ER) earn the win. This year’s big-name freshmen also delivered in a big way, as Slade Cecconi and JP Gates combined to work three scoreless innings of relief, and fellow freshman Adrian Del Castillo went 2-for-5 with two runs in the cleanup spot. Miami’s underclass talent is very exciting, and if Toral can maintain his groove, he can be a major difference maker in the heart of the order.

1. Texas Tech Storms Back Against Oregon

Red Raiders fans had to be reeling after the first inning earlier today. After the Ducks dominated Tech in the series opener on Friday, they got off to a roaring start, too, on Saturday, grabbing an 8-0 lead in the top of the first and touching up Tech righthander Bryce Bonnin for six runs in just a 1/3 of an inning. However, no lead in Lubbock is safe and the Ducks found that out the hard way in a 12-11 setback.

Tech responded in the bottom of the first with three runs, while it also scored four more runs in the second inning to trim the lead to 9-7. The Red Raiders and Ducks traded blows the rest of the way before the Red Raiders grabbed the lead for good in the seventh frame with a pair of bases loaded walks and an RBI groundout. Meanwhile, the Tech bullpen stepped up down the stretch with Trey Garlett allowing just a run in 3.1 innings and Taylor Floyd tossing 2.2 shutout innings.

Braxton Fulford smacked a pair of home runs to lead the Tech offense, while Josh Jung and Gabe Holt combined for five hits and three RBIs.

This has been a fascinating series thus far. And though the Ducks were on the losing side of things on Saturday, they’re showing some serious spunk.

Well, look at that.

Choosing the pecking order of the Big Ten entering the spring wasn’t easy. After all, you could go three or four different directions with the top of the league, one of those teams in the mix being Illinois.

The Fighting Illini won their series opener on Friday before having a showdown with ranked Wake Forest and righthander Colin Peluse on Saturday. The Illini didn’t disappoint, touching Peluse for two runs in six innings, but getting to the Wake bullpen as the game progressed in a 5-2 triumph.

Cam McDonald and Zac Taylor led the charge offensively with a pair of hits, while McDonald was the headliner with two runs batted in. Meanwhile, Illinois starting pitcher Andy Fisher put together a gutsy performance, striking out seven, walking one and allowing just two runs on three hits in 5.2 innings. Sean Leland was impressive out of the pen with 2.1 shutout frames.

It might be early, but the Illini are already clicking on all cylinders.

“We came out to win,” said head coach Dan Hartleb. “Some teams may get intimidated by a certain situation, but our guys did an unbelievable job competing. We had great energy, bunch of clutch hits, and the young guys all contributed in a big big way.”

3. Upset of the day: Wright State over Ole Miss

I’m not sure Wright State beating anyone of significance is truly an upset. After all, the Raiders are consistently solid. But Wright caught everyone’s attention Saturday afternoon with a 9-5 road win over Ole Miss.

The Raiders scored seven runs in the third and fourth innings, respectively, to take charge against the Rebels. WSU’s Seth Gray was the offensive headliner in the win, smacking a two-run double in the third before hitting a two-run single in the fourth.

He was alone in the production department. Wright first baseman Kyle Casserly had two hits and two RBIs, while Zane Harris and Zach Weatherford also had productive days with two hits each.

As for the Rebels, they were on the losing side of things, but Thomas Dillard and Ryan Olenek were bright spots with both hitting their first home runs of the season.

The Bruins received bad news earlier this week when righthander Ryan Garcia was declared out for a couple of more weeks with some soreness. However, UCLA righthander Jack Ralston was more than up to the challenge in a dominant 9-0 series-clinching victory over the Johnnies. Ralston struck out seven, walked one and allowed just three hits in six shutout innings.

It was overall a strong night for the Bruins. While Ralston led the charge on the mound, the offense did their part against St. John’s pitching staff, namely starter Jeff Belge. Belge was lifted after allowing four runs on six hits in just three innings. For the Bruins, Ryan Kreidler had a big afternoon at the plate with a double, triple, two walks and an RBI, while fab freshman Matt McLain hit his first career triple. Jeremy Ydens also had a productive day with two hits and two RBIs, along with a walk.

You often find out a lot about teams by the way they handle adversity, and the Bruins passed the test in a big way this weekend against a solid Johnnies club.

“We beat a pretty good pitcher in Mooney yesterday and we beat another good pitcher today,” said UCLA head coach John Savage. “We pitched well today, played defense. You keep on learning from the previous day – win, lose, or draw – and we did a pretty good job of coming back after a tight game and separating ourselves with a four-spot early on, and then kept building off that.”

Opposing coaches have always said that things can get out of hand in a hurry in Las Cruces. Well, Texas Southern now knows that all too well. The Aggies pelted TSU pitching for 20 runs in the season opener on Friday, but that pales in comparison to what happened on Saturday.

Not only did the Aggies sweep a doubleheader from the Tigers, they outscored them 62-14 in two games. Yes, 62-14 in just two games. Simply incredible.

It was an afternoon to remember for the Aggies … not so much for Texas Southern.

POSTGAME | Interview with HC @bbgreens5 following a pair of wins in a doubleheader that saw the Aggie produce 62 runs ?#AggieUp pic.twitter.com/OpSKXsqK3U

• Army suffered a tough loss to LSU, but at least the night ended in cool fashion. The Black Knights carried a 5-3 lead over the Tigers into the ninth inning before physical freshman Cade Beloso deposited a three-run home run into the bleachers to walk-off the contest, 6-5 in LSU’s favor.

Despite the setback against the Tigers, the Black Knights were hosted for dinner by Louisiana governor John Bel Edwards. Not a bad consolation prize.

TIGERS WIN! TIGERS WIN! @cade_beloso walks it off with a three-run blast to give LSU The 6-5 win against Army! #GeauxTigers? pic.twitter.com/L2R9M1TtHF

A big thank you to Governor @JohnBelforLA ‘88 and his wife Donna for hosting us tonight after our game at LSU. pic.twitter.com/rJACfkX5en

• Oregon State hard-hitting catcher Adley Rutschman has earned rave reviews from everyone, and he put his home run swing on display for the first time this season in a dominant win over Gonzaga. Check out this swing:

First of many HR this season from the top #mlbdraft prospect in the country. Adley Rutschman (c, Oregon State Univ.). pic.twitter.com/l0tBVqTiRG