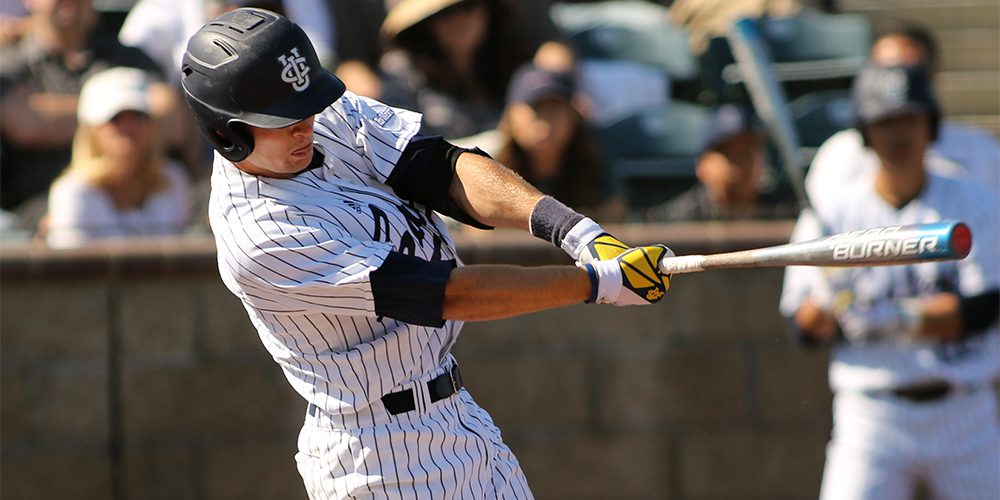 Team of the Day: UC Irvine

For the second-straight day, the Anteaters jumped on top-ranked TCU early in the contest and clinched a series win with a 6-3 triumph. UC Irvine two-hole hitter Cole Kreuter established the tone in the first inning with a two-run homer, while Adrian Damla had two hits and Keston Hiura had yet another double. On the mound, Irvine starting pitcher Cole Spear allowed just two runs on four hits in 5.1 innings. TCU got yet another rocky early start from freshman lefty Nick Lodolo. For the third-straight week, Lodolo struggled out of the gate, giving up four runs in the first inning. To his credit, he did toss four-straight zeroes after the first, but the damage was already done.

Mike Gillespie addresses his @UCIbsb Anteaters after 6-3 win over #1 TCU, their 2nd in a row over the Frogs pic.twitter.com/yNNWRDoPfg

Upset of the Day: UTSA over Texas Tech

The Red Raiders carried a 2-0 lead into the top of the ninth inning before UTSA’s Mason George smacked a base-clearing three-RBI triple to put the Roadrunners ahead of the Red Raiders 3-2. UTSA closed out Texas Tech in the bottom of the inning to get the victory. While George got the big hit for the Roadrunners, Jesse Baker and Aldo Buendia each had two hits. Tech wasted a quality start from lefty Steven Gingery, who allowed two runs in 8.2 inings, while UTSA’s Tyler Giovanoni allowed two runs on two hits in 6.1 innings.

Player of the Day: Matt Reardon, 2b, Florida Gulf Coast

The Eagles are on a roll and improved to 14-2 overall with a 13-1 win over Ohio State. And how about the afternoon Reardon had at the plate? He went 4-for-6 with two doubles, a triple and a whopping eight RBIs. For the season, Reardon is now hitting .338 with four doubles and 15 RBIs.

Texas: The Longhorns are starting to figure it out and picked up a series win over UCLA on Saturday with a 5-2 victory. Texas scored four of its five runs in the first inning and used the arm of righthander Morgan Cooper the rest of the way. Cooper put together a strong outing, striking out 10, walking four and allowing just two runs on two hits in five innings. Meanwhile, freshman third baseman Ryan Reynolds led the offensive charge with a home run, three hits and two RBIs.

Ole Miss RHP Brady Feigl: The talented righthander was rather average last weekend at the Shriners College Classic, but rose to the occasion in a 5-0 win over Furman. He struck out 10, walked one and allowed just three hits in eight innings. Ole Miss has yet to allow a run this weekend.

South Carolina: Chad Holbrook’s club bounced back nicely from that series loss to Clemson last weekend, beating Michigan State 5-2 on Saturday to clinch the series. Gamecocks righthander Wil Crowe struck out nine, walked three and allowed a run on three hits in 6.2 innings. Meanwhile, Josh Reagan was solid out of the bullpen in 2.1 innings.

LSU LHP Jared Poche: The big man from Lutcher, La., continues to get it done in impressive fashion. Poche extended his scoreless inning streak to 29 with a strong showing in a 12-5 win over Wichita State. Poche struck out three and allowed just four hits in seven shutout innings. That’s now eight hits Poche has allowed this season. On a side note, hard-hitting Greg Deichmann hit a home run for the second-straight night. We haven’t confirmed whether this one stayed in orbit or not.

Washington RHP Joe DeMers: After dropping the series opener to Indiana State, DeMers put the team on his shoulders in an 8-0 win over the Sycamores. He struck out six, walked one and allowed just five hits in a complete game shutout.

Arizona State: The Sun Devils are a young team and continue to have a see-saw approach this season. After struggling last weekend, the Devils got back to their winning ways this weekend, clinching a series win over Long Beach State with a 9-4 triumph. Zach Cerbo led the way for ASU with a home run, two hits and three RBIs, while Andrew Shaps and Carter Aldrete each had two hits in the game.

Austin Peay RHP Alex Robles: The Governors picked up a nice 4-0 shutout win over Jacksonville State with Robles leading the way. Robles struck out 11, walked one and allowed just three hits in a complete game shutout performance. He threw 94 pitches in the outing.

UNC Greensboro LHP Bryce Hensley: The Spartans 6-foot-4, 200-pound, junior lefty had a stellar start in a 6-1 win over Princeton. Hensley struck out 13, walked two and allowed a run, unearned, on three hits in eight innings.

East Carolina: After dropping the series opener to Charlotte, the Pirates stormed back in impressive fashion to take the final two games of the series, 10-7 and 3-0. The Pirates needed extra innings to beat the 49ers in the first game of the day, as Charlie Yorgen hit a walk-off there-run homer in the bottom of the 10th. Meanwhile, catcher Travis Watkins collected two hits and four RBIs. In the nightcap, lefty Jacob Wolfe set the tone for Cliff Godwin’s club, striking out four and allowing two hits in seven shutout innings, while Chris Holba tossed two shutout frames out of the pen.

Wake Forest: The Demon Deacons have been playing well since the Houston series and added yet another solid series win to their resume against NC State. The Deacs won the series opener on Friday, but dropped the first game of a doubleheader early Saturday. Wake, though, bounced back in the nightcap with a 6-5 victory. Stuart Fairchild led the Wake Forest offensive cause, going 4-for-6 with a triple, home run and two RBIs.

Florida State: The Seminoles might’ve dropped the series opener to the Eagles, but they bounced back with a vengeance by sweeping a doubleheader by scores of 11-1 and 13-0. In the first game, FSU was led at the plate by Tyler Daughtry, who went 3-for-4 with two RBIs, while in the nightcap, shortstop Taylor Walls led the way with three hits and three RBIs. Lefty Drew Parrish also had a strong start on the mound, striking out five and allowing six hits in six shutout innings. Could FSU move up to No. 1 with TCU’s series loss at UC Irvine? Stay tuned.

Not Feeling So Good

Tulane: Travis Jewett’s club was expected to be in the mix for a postseason berth this season, but that doesn’t appear to be the case unless they make some sweeping changes. The Green Wave dropped to 3-11 overall with a 5-4 loss to San Diego. The Wave has dropped the first three games of the four-game set, with starting pitcher J.P. France allowing five runs on nine hits in seven innings.

UC Santa Barbara: The Gauchos have some serious soul-searching to do on the bus ride back to Santa Barbara after dropping another ugly game to BYU, 14-8. UCSB starting pitcher Steven Ledesma allowed 10 runs on 10 hits in just 4.1 innings, while Bronson Larsen had a huge day for BYU, hitting a home run, tallying three hits and knocking in three runs.

Notre Dame: The Fighting Irish were supposed to be contenders this spring, but that doesn’t appear to be the case as they dropped to 3-10 overall in a 6-5 loss to Clemson to drop the series. ND starting pitcher Peter Solomon had a tough day on the mound, allowing five runs on four hits in two innings.

Tech's @RetroRahCooper makes a game-saving catch to help #Hokies to their first ACC win of the year. pic.twitter.com/LFyLZmovEb

And as a bonus, how about this play from Appalachian State’s Chandler Seagle?

Gonna be tough to find a better catch in @NCAACWS today than this snag from @chandlerseagle. #SCtop10 pic.twitter.com/3sUbmKOfhc