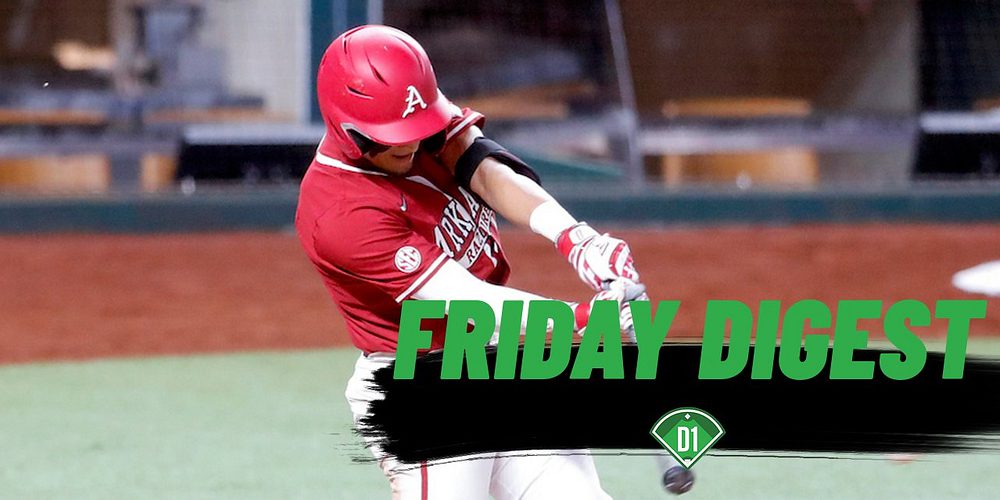 Team of the Day: Oregon

How about Mark Wasikowski’s Oregon Ducks?

Last weekend, the Ducks went on the road and did a clean sweep of UC Santa Barbara. And even after the weekend showing against the Gauchos, Waz was not shy about his team’s lack of ranking in the D1Baseball Top 25. He didn’t think they’d earned it … yet. They still had plenty to prove.

Well, the Ducks made a bold statement in the series opener against arch nemesis Oregon State, shutting out the Beavers 7-0 and leaving no doubt from the fourth inning on. UO lefthanded pitcher Robert Ahlstrom struck out 10, didn’t walk anyone and allowed three hits in seven innings, while at the plate, the Ducks touched up OSU righty Kevin Abel for five runs on six hits in 4.1 innings. Kenyon Yovan had a mammoth home run in the game, while Tanner Smith had a triple, two hits and four RBIs.

The Ducks, who have now won five-straight games, have our attention.

• Western Carolina starting pitcher Zebby Matthews struck out a career-high 12 batters, walked two and allowed a run and five hits in eight innings in a 5-0 win over St. John’s

• Texas A&M lefthanded pitcher Dustin Saenz put together yet another outstanding start in a 10-1 win over Samford. Saenz struck out 14, walked one and allowed four hits in eight shutout innings.

• Ole Miss righthanded pitcher Gunnar Hoglund is having a ridiculous season on the mound, and his prowess continued Friday night in a 10-1 win over UL Monroe. Hoglund struck out 14, walked one and allowed two hits in six shutout innings. It was a career high in strikeouts for Hoglund, and it was the most strikeouts in a single game since Drew Pomeranz recorded 16 back in 2010.

• Bradley crushed Alabama State, 18-1, behind the bat of Dan Bolt. Bolt went 4-for-4 in the game and reached base seven times. In addition to his four hits, he walked twice and was hit by pitch once. He finished the game with four RBIs.

• Houston lefthanded pitcher Robert Gasser put together a strong start yet again in a dominant 12-3 win over Texas State. Gasser, who was up to 94-95 mph last week against Texas, struck out 10, walked one and allowed a run and three hits in six innings in the win. You can read more about Gasser, here.

• Northeastern and UMass Lowell split a pair of games Friday afternoon. But the headliner for the day was NU starting pitcher Sebastian Keane in the second game. He struck out nine, didn’t walk anyone and allowed just two hits in a complete game shutout.

Upset of the Day: Jacksonville over No. 5 Florida

The Dolphins entered the day with a 3-8 overall record, but you’d never know that by their performance against Florida in a 10-9 win. JU’s offense didn’t do much against Gators righthanded pitcher Tommy Mace, but it had some success against the bullpen, and also had some help thanks to four UF errors. Ruben Someillan finished the night with three RBIs, while Cory Heffron, Tommy Joseph, Dakota Julylia and Jackson Grabsky each chipped in two-hit performances. To give an idea of how wild this game was, JU and UF combined to score eight runs in the ninth inning.

• Gonzaga picked up an impressive 13-8 win over No. 11 TCU. The Zags put together a solid 14-hit performance against Charles King and the Horned Frogs. Stephen Lund had a big night at the plate, hitting a home run and knocking in a couple of runs, while Andrew Orzel had two hits and knocked in three runs and Brett Harris chipped in a three-hit performance. In all, six Zags finished the night with multi-hit performances.

• Pittsburgh made headlines two weeks ago with a road series sweep over Florida State. We wrote about Pitt’s club, here. The Panthers took a slight step back last weekend, but they’re apparently back this weekend. Pitt was down 8-4 entering the ninth inning against No. 7 Georgia Tech before erupting for seven runs in the frame to win, 11-9. David Yanni hit an absolute bomb for Pitt in the ninth, while he finished the evening with two RBIs, along with Kyle Hess. Riley Walsh also had a strong night for the Panthers with a four-hit job.

• Arizona coach Jay Johnson isn’t going to sleep well tonight. HIs defense struggled mightily with five errors as the No. 24 Wildcats dropped a 10-9 decision to Wichita State. Ross Cadena led the Shockers offensively with two hits and three RBIs, while Arizona’s Chandler Murphy allowed eight runs (four earned) on five hits in just 3.2 innings of work. It was certainly a night to forget defensively for the Wildcats.

• Cal Poly edged out No. 6 UCLA, 5-4, after scoring a single run in the bottom of the eighth inning on Friday. Cal Poly’s Brooks Lee and Matt Lopez each had two hits and two RBIs, while Dylan Villalobos was terrific out of the bullpen with three strikeouts in two shutout innings. As for the Bruins, righthander Zach Pettway struck out four and allowed two runs and two hits in four innings.

You have my attention …

• Top-ranked Arkansas was in an absolute battle on the road against Louisiana Tech. If you read my piece on the Bulldogs yesterday, here, you know exactly why. Lane Burroughs has a strong squad. Tech actually had a 7-4 lead heading into the eighth inning before they walked a run home and Bob Moore hit a two-run single to tie the game at 7-7. Then, in the 10th inning, Arkansas shortstop Jalen Battles hit an absolute bomb, two-run home run to give the Hogs a 9-7 lead and the win. Matt Goodheart also hit a home run in the game, while Caden Wallace chipped in two hits.

• Southern Illinois continues to make history this spring, getting off to a school-record 12-0 start with a 14-5 victory over Evansville to begin Missouri Valley play. J.T. Weber had two home runs for the Salukis, while Evan Martin, Vinni Massaglia and Philip Archer also hit home runs. Five Salukis sluggers finished the night with multi-hit performances.

“Our offense can get you in multiple ways,” SIU coach Lance Rhodes said. “We don’t swing at a ton of bad pitches right now. We have some thunder from top to bottom. On a day like today when the wind is blowing out pretty good, we have some guys who can leave the yard and change the game in the blink of an eye.”

• No. 19 Texas began its home series against No. 12 South Carolina with a hard-fought, 4-1 win. Longhorns righthanded pitcher Ty Madden was solid yet again, striking out five, walking three and allowing three hits in seven innings, while for the Gamecocks, Thomas Farr put in a good night on the mound with 10 strikeouts, just one walk and a run on seven hits allowed in six innings. Zach Zubia had a double and two RBIs, while hard-hitting Wes Clarke had two hits for South Carolina.

• No. 25 Notre Dame continues to impress in ACC play, cruising past Virginia, 10-5, on Friday night. The Fighting Irish, who are now 5-2 in conference play, got a strong pair of performances from Jared Miller and Niko Kavadas, who each hit home runs in the win over the Cavaliers. Meanwhile, how about veteran pitcher Joe Sheridan out of the bullpen. He struck out seven and allowed just one hit in five shutout innings.

• Florida State might just be figuring things out. The Seminoles took a series from Virginia last weekend and opened this weekend’s series at No. 18 Virginia Tech with a 6-4 triumph. Reese Albert and Logan Lacey each hit home runs for the Seminoles, while on the mound, FSU used six pitchers to take down the Hokies.

• Indiana State gave Tennessee all it could handle two weekends ago before cruising past Florida International last weekend. Well, the Sycamores appear to be loving live in South Florida, beating No. 20 Florida Atlantic, 10-2, Friday. night to clinch a series win. Diego Gines hit a home run and knocked in three runs, while Max Wright and Brian Fuentes each finished the night with two hits. ISU starting pitcher Geremy Guerrero struck out 13, walked one and allowed a run and five hits in 7.1 innings of work. Guerrero has 28 strikeouts in his last two starts.

• No. 10 Louisville cooled off sizzling hot No. 17 Boston College, 7-3, in the series opener. UL starting pitcher Michael Kirian struck out seven, walked two and allowed six hits and three unearned runs, while Adam Elliott was outstanding out of the bullpen with five strikeouts in four shutout innings.

• Stetson began its weekend series against Alabama with a 4-2 triumph Friday night. Stetson’s Nick Durgin put together a strong start, striking out nine, walking two and allowing two runs on two hits in eight innings of work. Meanwhile, with Connor Prielipp still out of the ‘Bama weekend rotation, Tyler Ras allowed three hits and one earned run in five innings.

• No. 8 Miami used a balance of strong offense and pitching to cruise past Wake Forest, 10-0. Alejandro Rosario had a terrific start, striking out seven, walking two and allowing just one hit in seven shutout innings, while offensively, Anthony Vilar and Alex Toral each hit home runs.

• No. 3 Mississippi State recorded its fourth-straight shutout for the first time since 1909 in a 14-0 win over Eastern Michigan. Bulldogs lefthanded pitcher Christian MacLeod struck out 11, walked one and allowed just one hit in five shutout innings, while Kamren James chipped in a three-hit performance.

• Stanford is quietly off to an impressive 8-1 start after a 4-1 win over UC Irvine. Stanford righthander Brendan Beck struck out eight and allowed just two hits in 6.1 innings of work. However, he did somehow walk six batters. Offensively, Nick Brueser and Vincent Martinez each hit home runs.

• Southern Miss and Louisiana had some drama in its game with a home run, a USM hitter getting beaned in the head and more. But in the end, the Golden Eagles were indeed victorious, 13-4. Christopher Sargent, DJ Lynch and Reece Ewing each hit home runs for the Eagles, while on the mound, Hunter Stanley struck out eight in seven innings. For the Cajuns, freshman Hayden Durke had a rough start with 10 runs allowed in just 1.2 innings of work.

• Nebraska picked up a quality win over Ohio State in Minneapolis, 10-4. Cade Povich struck out 12 and allowed three runs in six innings, while Jaxon Hallmark and Max Anderson each hit home runs for the Huskers. Earlier in the day in Minny, Ohio State was blanked by Iowa with Trenton Wallace leading the way for the Hawkeyes. He struck out 10, walked two and allowed two hits in six shutout innings.

• The projected top two teams in the Southland Conference coming into the season are squaring off in Hammond, La., this weekend, and Southeastern Louisiana crushed Sam Houston State, 12-3. Will Kinzeler led the Lions on the mound with nine strikeouts and just three runs allowed in 7.1 innings, while offensively, Preston Faulkner had two doubles and a home run, along with four RBIs.

• Arizona State is now without Cooper Benson and Boyd Vander Kooi (for the season), and most recently, lefthander Erik Tolman was put on the shelf for some arm soreness for a couple of weeks. But the Devils still found a way to trounce scuffling Cal State Fullerton, 10-0, Friday night. Allbry Major led the offensive charge with a home run. As for the Titans, Tanner Bibee was lifted after allowing three runs in 3.1 innings, and Fullerton as a whole is now 4-9. Not good.