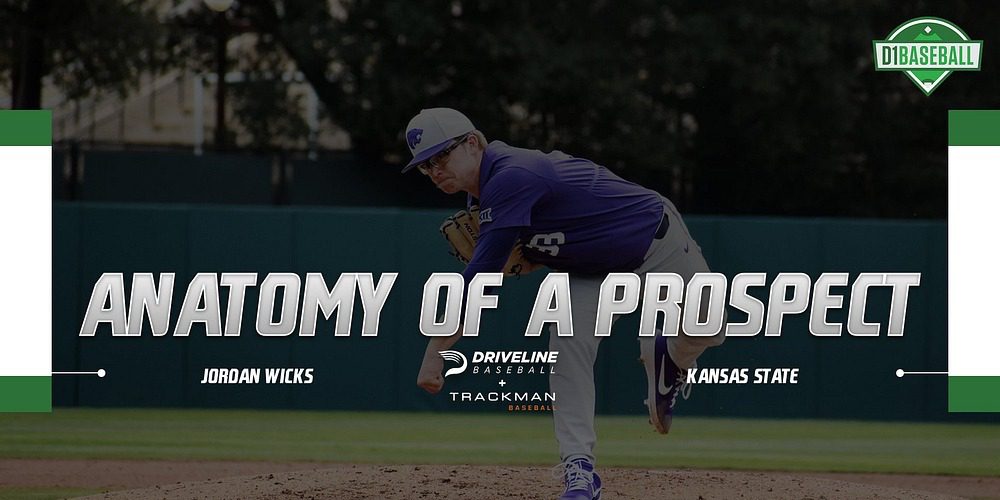 After a sterling start to an abbreviated season and subsequent domination of the Northwoods League, Kansas State’s Jordan Wicks was named D1Baseball’s Summer Breakout Prospect. Further, he has skyrocketed up prospect lists, coming in at No. 15 on the College Prospects list.

In this Driveline Player Profile, we’ll take a detailed look at what has led to Wicks’ dominance at the collegiate level:

In his first year on campus, Jordan Wicks burst onto the scene with the Wildcats, posting a quality 3.61 ERA and 3.63 FIP in 84.2 innings, while being stingy on walks and missing bats along the way.

Among Power Five pitchers who threw at least 75 innings in 2019, Wicks was 21st overall in FIP (one of only three freshmen in the Top 25) and 38th overall in K-BB%. He was also among an elite group of Power Fiver freshmen when it came to cWAR (an attempt to summarize the entirety of a player’s contribution in one catch-all number), with his value of 3.64 Wins above Replacement being topped only by Kumar Rocker and JT Ginn.

The early success that led to capturing Big 12 Freshman of the Year was just the beginning for Wicks, who got off to a torrid start this past spring, continuing to limit the base on balls while raising his K% from 23% to 27%. Unfortunately, after his fourth start, the world was put on hold due to COVID-19.

Thankfully, Wicks was able to keep the momentum from the spring season rolling into the Northwoods League, where he made quite the impression with the Rockford Rivets.

He continued to punch tickets at a high rate, while also keeping his walk rate steady. To put his K-BB% of 32% into context, the 2020 Major-League leader was Shane Bieber with 34%.

Wicks, who could have once been regarded as a “pitchability lefty”, has seemingly developed into a strikeout inducing, walk reducing machine. His deep and varied arsenal, as well as the ability to control the zone, puts him in a great position to take another step forward and solidify himself as a likely first rounder in the 2021 draft.

Early in his collegiate career, Wicks’ fastball velocity and underlying movement metrics were more indicative of a crafty collegiate lefty, rather than a near-certain first rounder. But, after being named Big 12 FOTY, he continued to put in work. He credited a focus on the lead leg block and increased long toss in between outings for a gain of a few ticks going into this past spring, taking him from sitting around 88 to living comfortably at 90.

This summer, he turned it up another notch. Wicks sat 91.5 (topping at 93.3), which would’ve placed him in the 35th percentile amongst all Major League left handers in 2020, and around average for LH starters. However, velocity isn’t the standout component to this heater’s success, as the key ingredient here is how he imparts spin onto the baseball.

With a tilt nearing 12:00 (11:13) and a spin efficiency of 96.52% (MLB LHP avg. is 11:06 and 90.2% respectively), Wicks is able to apply a great amount of backspin onto his four-seamer, resulting in above-average carry (also referred to as “lift” or “vertical break”) on the pitch (65th percentile, MLB lefties) and league average arm-side run. This puts him alongside successful company: Josh Hader, A.J. Minter, and Caleb Ferguson.

This fastball profile is one that plays exceptionally well, as batters tend to swing underneath pitches with above average carry. This gives reason to believe that Wicks could perhaps bump up his bat missing abilities even more with a focus on four-seamers in the upper-third of the strike zone, relative to the tendency to pound the knees that he showed over the summer. Regardless, this is a very productive pitch, and one that sets the tone for his entire arsenal.

A plus offering, Wicks employs use of his changeup more than ⅓ of the time. What makes this cambio a standout is how it plays off of his high carry fastball. There’s around 10 mph of velocity separation (93rd percentile among lefties) and 7.93 inches of vertical separation (right around average). This combination of attributes, along with Wicks’ conviction in the pitch, allows both the change and the fastball to play up.

What makes this pitch really unique is how it comes out of Wicks’ hand. It sits below 90% in spin efficiency (88.88%, 17th percentile), which tells us that he gets around this pitch a touch at release, making it profile more as a cut-change. Instead of getting just backspin and sidespin, there is an element of gyro spin (or “bullet spin”) here, which in turn kills the amount of vertical lift on the pitch.

Generally, changeups with a higher gyro component give pitchers a shortcut to vertical separation, coming at the expense of generating little-to-no armside movement (or “run”). Wicks’ CH, however, does not fall into this bucket because of his above average ability to kill spin and pronate (turn over) the pitch relative to MLB LHPs, placing him well above the norm in regards to run. The pitch possesses great two-plane movement, and there’s the opportunity for more if he were to decide to drop the tilt on the pitch from around 10:20 to the 9:30-10:00 range, as well as increasing efficiency.

Wicks’ breaking balls are a step behind his FB-CH combination at the present moment (being thrown just 15% of the time), but their development will play a key part in his future success.

Clearly his third best offering, the slider finds itself somewhere between a cutter and a more traditional sweeping breaking ball (3.19 inches of sweep, 3.72 inches of lift), while sitting just below 83mph (topping at 85). This is a common profile for younger LHPs, filling the role of something that moves to the gloveside.

If the velocity can tick up to around 85-87, the pitch has the potential to live at its current movement profile, as the increase in velo will add some sharpness. But, that is a tough task, and a focus on speed would likely come with an increase in lift and less sweep, making the pitch profile more along the lines of a cutter.

Another route for the pitch, and one that could possibly give Wicks a weapon against LHB, would be the sweeping slider route. Especially if he can maintain velocity on the pitch while adding gloveside movement, this would fill a fairly large hole in his arsenal.

The curveball is behind the slider in both present and projected grades. As it stands, the curve has a more slurvish shape that lacks true definition, playing more as a slower version of his SL with some additional depth.

For breaking balls, just having the propensity to spin the baseball is oftentimes half the battle. Wicks spins his curveball just a hair below 2500rpm (2426), showing that he has some feel for spin. Seeing as he comes from a higher ¾ slot and already has a four-seamer working in the opposite direction, a clear fit here would be a 12-6, downer curve. Wicks has some difficulty getting the ball to spin to his gloveside, so perhaps a profile that requires more topspin rather than sidespin would be easier for him to access. KSU’s Head Coach, Pete Hughes, has reported a “plus curve” from earlier this fall, so Wicks may have found some further adjustments.

The pitch mix here, coupled with his clear maturity and poise on the mound, is quite enticing. Wicks has shown the ability to control the strike zone with two average to plus offerings in his FB and CH, and all four of his offerings show room for further improvement.

It’s worth noting that Wicks seems to have a slight cross-fire action to his delivery – which could potentially explain his natural feel for throwing the CH and his difficulty with getting gloveside movement. While it definitely doesn’t seem to impede on his strike-throwing abilities, by cutting himself off, he could be getting “stuck” when trying to impart sidespin onto the baseball (especially as he comes from a higher arm slot).

While the breaking balls currently lag behind the other offerings that move armside, there is reason to be bullish on a quality four pitch arsenal coming from Wicks this spring. His mix compares favorably to Rays reliever Jalen Beeks, who has some added funkiness and velocity, but features a similar reliance on his backspin heavy four-seamer and changeup, mixing in a cutter/slider hybrid. This profile is also reminiscent of last year’s No. 25 overall pick, Jared Shuster, though the two differ when it comes to velocity (Shuster spiked a lot going into last season), ability to spin the baseball (Wicks has the advantage here), and strike-throwing prowess (where Wicks has a much longer track record).

After allowing just two earned runs across 46 innings this year to go along with seemingly endless strikeout numbers, Wicks has set quite a high bar for himself entering his first draft-eligible season. Reports from Manhattan have him continuing to climb in velocity, sitting 93-95 in his first fall outing. This, coupled with the rest of his mix, gives plenty of reason for excitement as we look towards the 2021 NCAA schedule.

Wicks figures to go into next summer’s draft as one of the top college lefties available. Given a full season to compete on the weekends with rotation mate Carson Seymour, he will help form a two-headed monster for a Kansas State program looking to make waves in the Big 12.