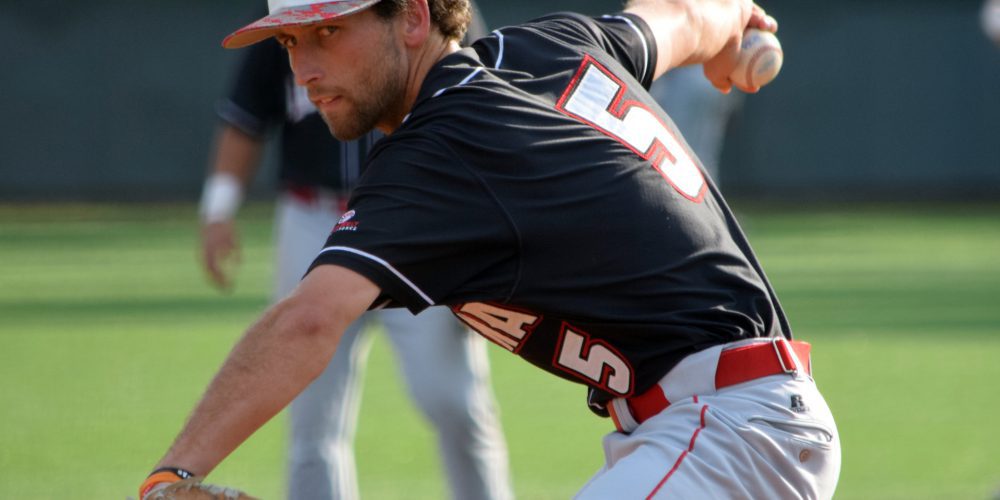 Louisiana-Lafayette is in business with Colten Lee back in the saddle. (Kendall Rogers)

LAFAYETTE, La. – There’s a lot of construction going on around the Louisiana-Lafayette campus. While long-time head coach Tony Robichaux is in the process of getting his loaded Ragin’ Cajuns ready for the 2017 season, there are other signs of progress at “The Tigue”, as the perimeter of the playing field has turned into a construction zone.

That, more than anything else, shows how far this program has come under Robichaux’s leadership. The Cajuns are in a great spot as a program and the new ballpark is expected to be one of the nation’s best when it’s all said and done.

There’s plenty of excitement for the Cajuns for a variety of reasons. In addition to the new ballpark, this is a team expected to compete for not only the Sun Belt title and a potential regional host, but one that, if we’re being honest, could end the season at the College World Series. Yep, I think they have the potential to be that good.

“I think this team looks really good. It’s got really good depth on the mound and the big thing for us will be plugging those key holes going into the spring,” Robichaux said. “I think the biggest thing I notice about this team right now is that we’re better hitters. J.T. (Jeremy Talbot) and Babs (Anthony Babineaux) have done an exceptional job with this offense. Our strike-zone awareness needed to get better. We could bunt and run last year, but we didn’t control our aggression really well. So far, from what I’m seeing this fall, we’re doing that and much more.”

The most noticeable improvement for the offense thus far is the increased power production. ULL had one of the nation’s most powerful offenses when it reached the super regional round a couple of years ago. But things have been a little different the past couple of seasons, especially last year, as the Cajuns finished the year with 45 homers as a team with just one player, Joe Robbins, finishing the campaign with double-digit homers.

Perhaps I’ll be wrong, but if first impressions mean anything, the Cajuns will take a giant leap in the power department in 2017. Steve Sensley is more seasoned, the addition of Handsome Monica and Todd Lott will help and the return of veterans Robbins and Brenn Conrad will pay huge dividends.

“I think the thing that has made us so good at the plate this fall has been our approach and just the overall plate awareness,” he said. “Our guys are just doing a tremendous job so far this fall, so we’re pretty encouraged.”

Without further ado, here are some inside notes and scoop on the Cajuns.