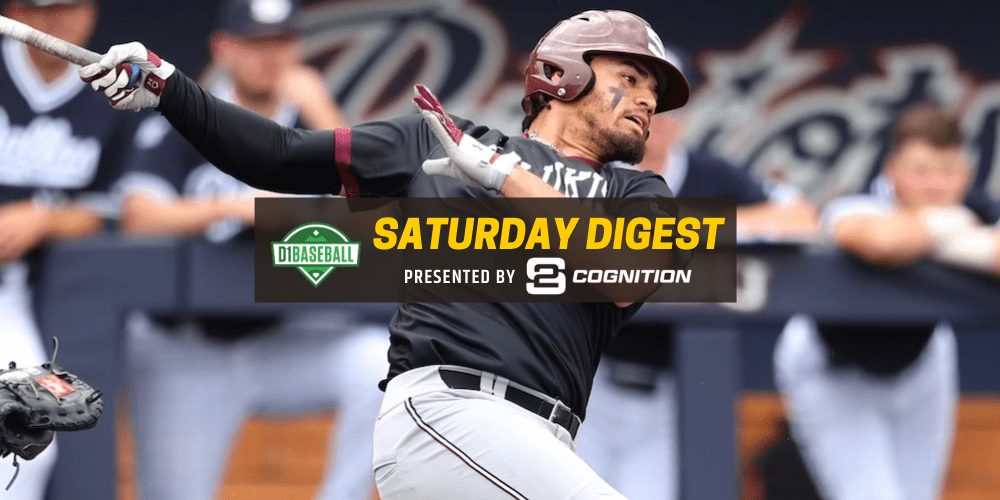 • Virginia clinched a series win over North Carolina with Brian Gursky leading the charge on the mound. He struck out nine in 5.2 innings of work, while offensively, Jake Gelof and Devin Ortiz each hit homers and the duo combined for a whopping seven RBIs. The Cavaliers bounced back nicely from a tough weekend, while the Tar Heels are now 8-12 in the ACC and need a win in the series finale.

• Texas Tech had a tough showing on the road against TCU last weekend, but it returned home to Rip Griffin Park this weekend, where it is almost unbeatable. Tech clinched a series win over West Virginia with a doubleheader sweep — 7-5 and 12-2. In the first game, Kurt Wilson had a huge home run and Easton Murrell added another homer, while in the second game, Wilson hit another home run and freshman Owen Washburn added a home run. Righty Brandon Birdsell also turned in a top notch pitching performance with nine strikeouts and no earned runs allowed in eight innings.

• I thought Notre Dame would return home to South Bend and respond well from last weekend’s series loss to Duke, and that hunch proved correct Saturday as the Fighting Irish secured a series win over Wake Forest with a 21-3 triumph. Brady Gumpf, David LaManna, Jack Brannigan and Zack Prajzner each hit home runs in the win, with LaManna leading the way with five RBIs. How dominant have the Irish been so far this weekend? They’ve outscored the Demon Deacons 29-6 the first two contests.

• Georgia’s pitching staff had a poor showing against Texas A&M in a home series loss last weekend, but that was without All-American righthanded pitcher Jonathan Cannon. Cannon returned this weekend, and the Bulldogs immediately righted the ship on the mound. The Bulldogs clinched a series win over Alabama with a 3-0 triumph on Saturday. Cannon returned to the mound and tossed five perfect innings with six strikeouts before reaching 66 pitches and being lifted from the game. What an encouraging start and weekend for Scott Stricklin’s club moving forward.

• Southern Illinois (28-10) handed Dallas Baptist its second-straight Missouri Valley Conference series loss on the heels of DBU announcing it was headed to Conference USA next season. SIU scored three runs in the first inning and didn’t look back the rest of the way. Kaeber Rog had a massive day for SIU with two homers and three RBIs, while J.T. Weber added a home run and a double. SIU now sits two full games ahead of DBU in the MVC standings entering the series finale.

• This series win is noteworthy because of how it has transpired. We’re of course talking about Virginia Tech, who clinched a series win over Boston College with a 6-1 triumph on Saturday. There’s been so much talk about Tech’s offensive lineup, but how about the pitching staff? They’ve allowed one run in two games, and on Saturday, Dru Hackenberg was terrific, striking out seven, walking two and allowing a run on six hits in seven innings of work.

• Much like Virginia Tech, much of the discussion about Tennessee has centered around the offense, but the weekend rotation is shining. That trend has continued this weekend at Florida as the Volunteers clinched a series win over the Gators with a 3-0 triumph. UT righthander Blade Tidwell was up to 97-98 mph with his fastball and struck out five in 4.2 innings, while Camden Sewell was terrific out of the pen with three strikeouts in 4.1 shutout innings. Tennessee equaled the best start in SEC history with Saturday’s win.

• Yeah, that Miami lull didn’t last long. The Hurricanes hit the road last weekend and ran into an absolute buzz saw against Virginia Tech. They responded Friday night with a close win over Pittsburgh before erupting offensively with 17 runs on 15 hits in a 17-2 series-clinching win on Saturday. Renzo Gonzalez and Jacob Burke each hit home runs for the ‘Canes, while Max Romero had a double and knocked in three runs. Though it will get overshadowed by the night the ‘Canes had at the plate, Karson Ligon returned to normal with eight strikeouts, two walks and allowed just a run on four hits in eight innings.

• Ranked Georgia Southern passed yet another stiff test this weekend with a road series win over South Alabama — clinching the series on Saturday with a 7-4 triumph. Noah Ledford hit a triple and knocked in two runs in the game, while first baseman Jason Swan had two hits and three RBIs. Ben Johnson was terrific out of the bullpen for the Eagles, striking out four in 2.1 perfect frames. GSU, which was a regional host in our latest postseason projections earlier this week, is up to 2 in the RPI.

• Color me a fan of Maryland’s toughness. The Terrapins hit the road this weekend to face red-hot Illinois. And it would’ve been easy for the entire weekend to snowball after losing 19-1 in the opener. However, the Terps responded Saturday with a doubleheader sweep and 20 runs scored in two games. Five Terps hit homers in the first game, and Luke Shliger and Chris Alleyne combined to knock in seven runs. In the second game, Maxwell Costes led the offensive charge with a double and a home run.

• Here comes Matt Deggs and Louisiana. The Cajuns put together another solid performance on Saturday to clinch a series win over Georgia State and have now won five-straight series (South Alabama, Georgia Southern, Arkansas State, UL Monroe, Georgia State). In Saturday’s 6-3 win over the Panthers, Jacob Schultz was terrific, striking out six, walking two and allowing just two runs in a complete game performance. The Cajuns were led at the plate by Carson Roccaforte. And as a whole, they’re up eight spots in the RPI over the past week.

• Wofford has flexed its muscles against Mercer so far this weekend, clinching a road series win on Saturday with a 5-0 triumph. Josh Vitus gave the Terriers a strong start, allowing just three hits in five shutout innings of work. Meanwhile, Nolen Hester chipped in a three-hit performance. With the two wins over Mercer this weekend, Wofford’s RPI is up to an insane 12. Read more about Wofford’s win, here.

• Rutgers entered the weekend red-hot, but Iowa extinguished the Scarlet Knights in a hurry this weekend, clinching a series win over RU on Saturday with a dominant 12-2 win. Connor Schultz gave the Hawkeyes a dominant start for the second-straight day, striking out six and walking one in eight innings, while offensively, Sam Petersen had three hits and three RBIs. Iowa’s RPI is up more than 15 points so far this weekend.

• Mississippi State is still the king of the Ole Miss-MSU rivalry for another season (USM would have a bone to pick about running the actual state). The Bulldogs had a 6-4 lead in the bottom of the ninth until Ole Miss shortstop Jacob Gonzalez hit a two-run home run to force extra innings. After a quiet 10th inning, MSU’s Brad Cumbest hit a solo home run in the 11th to essentially win the game. Bulldogs freshman slugger Hunter Hines had a big day at the plate, hitting a home run and knocking in three runs, while RJ Yeager hit another home run for Chris Lemonis’ club. Both teams still have work to do to make the postseason, but MSU is in a better spot now.

• NC State scored six runs in its final two at bats to defeat Louisville 15-10 to force a decisive series finale on Sunday. Gino Groover, Josh Hood, J.T. Jarrett, Payton Green, and Jacob Cozart all hit home runs in the win, while Groover, Jarrett (2) and Green also hit doubles in the win. Jarrett had a massive day at the plate with six RBIs.

• Texas A&M caught everyone’s attention last weekend with a road series win over Georgia. That continued Friday night as the Aggies beat Arkansas with Nathan Dettmer and Jacob Palisch leading the way. Well, Arkansas’ pitching staff had the final say Saturday in a 3-1 road win. Arkansas freshman lefty Hagen Smith struggled with his command, but the bullpen did a phenomenal job with Zack Morris allowing one hit in three innings, Evan Taylor striking out two in 1.2 innings and Brady Tygart closing it out with a clean ninth. Brady Slavens led the Arkansas offense with a pair of homers early in the game.

• Washington State has been giving Oregon all kinds of fits this weekend. The Cougars almost won the series opener, and did win on Saturday, 10-8 to even up the series. Bryce Matthews, Jacob McKeon, Collin Montez, and Kyle Russell each hit home runs for the Cougars — McKeon also hit a double. UO starting pitcher Jace Stoffal, who had been hampered with an injury for a while, allowed five runs in 2.1 innings.

• Just a day after getting pummeled on the road by Oklahoma State, TCU didn’t flinch in Saturday’s game — a 6-4 win. The Frogs got off to a hot start in the game with all six runs scoring in the first three frames, as Oklahoma State starting pitcher Victor Mederos allowed five runs on six hits in two innings. Offensively for the Frogs, Tommy Sacco and Luke Boyers hit home runs, while in the bullpen, guess who — Luke Savage — was terrific yet again, tossing 2.2 shutout innings.

• Just a day after getting no-hit at home, Kentucky showed toughness by responding with a 3-2 win over Vanderbilt on Saturday. UK starting pitcher Zack Lee struck out four and allowed two runs in five innings of work, while Tyler Guilfoil was outstanding out of the bullpen with five strikeouts and just one hit allowed in four shutout frames. The series finale is huge for both teams, especially Kentucky, which is flirting with the prospect of falling to 6-12 in the SEC.

• This might be one of the more bizarre performances I’ve ever seen. So, Siena’s Ben Seiler finished the night with 19 strikeouts and just three walks in nine innings of work. However, not only did the Saints lose 6-5 to Niagara in extra innings, Seiler allowed five runs (two earned) on eight hits. Still, 19 strikeouts is ridiculous, so props to him for that.

• Texas State outfielder John Wuthrich had an insane day at the plate as the Bobcats took down Little Rock at home, 30-4. Yep, that is not a misprint. It was 30-4. Wuthrich finished the afternoon with two home runs, while Cade Manning and Payton Lewis each hit homers as well for the Bobcats.

• Jackson State head coach Omar Johnson earned his 500th career win on Saturday in a 5-0 win over Alabama State to even the series. Nikelle Galatas put together a strong start for the Tigers, striking out five and allowing a run in 5.2 innings of work.

• Ball State head coach Rich Maloney reached win No. 900 on Saturday as the Cardinals swept a doubleheader from Northern Illinois, and did so while scoring 19 runs in the two games.