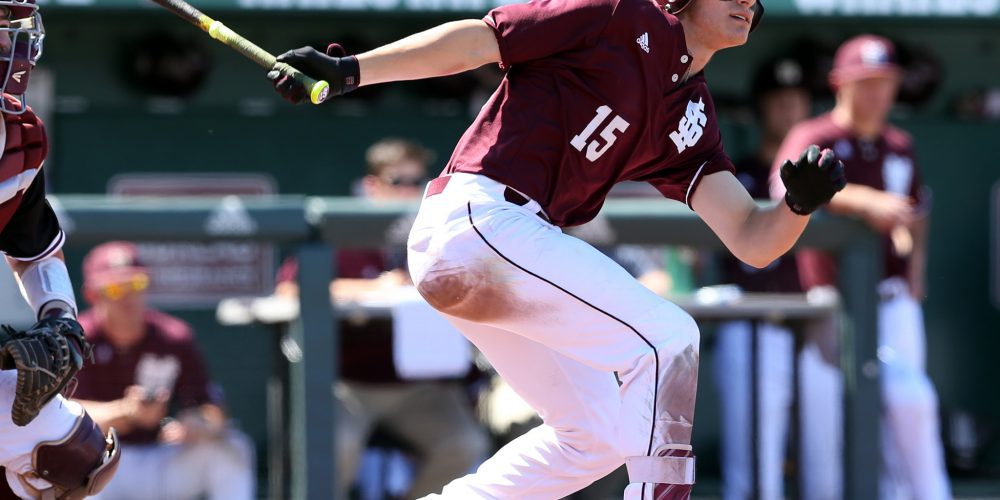 Most Exciting Player: Jake Mangum, of, Mississippi State. The freshman sensation plays with abundant energy, has an innate feel for his barrel and makes things happen with his speed.

Best Defensive Player: Timmy Richards, ss, Cal State Fullerton. Shortstops don’t get much more sure-handed than Richards, who makes all the routine plays and many plays that are far from routine.

Best Pitcher: Dakota Hudson, rhp, Mississippi State. Hudson is a slam-dunk first-round pick with some of the best pure stuff in the nation, highlighted by a mid-90s fastball and a devastating cutter.

X-Factor: Joey Lucchesi, lhp, Southeast Missouri State. The physical southpaw ranks second in the nation in strikeouts, and if he can bounce back strong from a heavy workload in the OVC tournament, he’s got a chance to beat MSU and turn this regional on its head.

Best Starting Rotation: Cal State Fullerton. It’s tough to pick against MSU’s rotation, but the Titans lead the nation in ERA and WHIP, and their strike-throwing trio of Connor Seabold, John Gavin and Colton Eastman is just rock-solid.

Best Bullpen: Cal State Fullerton. Chad Hockin and Dylan Prohoroff have explosive stuff, and Scott Serigstad’s breaking ball is just nasty, giving the Titans an edge against anyone in the late innings.

Best Offensive Team: Southeast Missouri State. Sure, the numbers are inflated by the lesser competition in the Ohio Valley Conference, but the numbers are just too loud to ignore; the Redhawks are the nation’s eighth-highest scoring team, and their deep lineup features power, speed and players who hit for average.

Best Defensive Team: Cal State Fullerton. The Titans rank 21st in the nation with a .977 fielding percentage; they rarely beat themselves with mental mistakes on defense.

No. 1 Seed Win Probability (1-10): 5. Mississippi State is the most complete team in this regional, and it is certainly the favorite — but the Bulldogs got a tough draw that should make for a compelling weekend in Starkville. SEMO is one of the best No. 4 seeds in the tournament, Fullerton is an elite run prevention outfit, and Louisiana Tech had a solid case for earning a No. 2 seed after its strong finish.

After an injury-ravaged 24-30 season in 2015, Mississippi State generated a lot of positive buzz from scouts in the fall, and the Bulldogs entered the season ranked 15th in the D1Baseball Top 25. They more than lived up to that billing, winning road series at Florida and Vandy plus home sets against LSU and Ole Miss en route to a 21-9 SEC record and a regular-season conference championship. That earned MSU its first-ever national seed. The Mississippi State underwent a radical transformation, jumping from 161st in the nation in batting and 157th in scoring a year ago to 15th in batting (.312) and 51st in scoring (third in the SEC). A major reason for the turnaround was the infusion of talent provided by a banner recruiting class; MSU’s top three hitters are all newcomers: speedy freshman sensation Jake Mangum (.423/.475/.533) and physical juco transfers Nathaniel Lowe (.355/.427/.509, 5 HR, 20 2B) and Jack Kruger (.353/.442/.558, 7 HR, 18 2B).