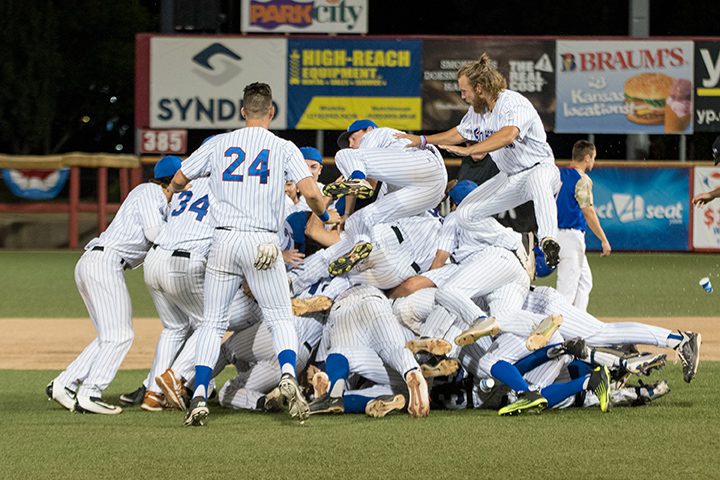 For college sports fans, incredibly specific memories are not only a way to recall the highs and lows of fandom, but they also serve as a membership card for their groups.

College baseball fans, for example, can simply say “Coastal,” “Warren Morris” or “gorilla ball” to recall three different College World Series. If you can name the years and champions associated with those terms, you can walk past the velvet rope into the Rosenblatt Lounge. (If you can’t, we have the answers at the bottom.)

Homefield Apparel understands this passion — because that’s what got the company going. Connor Hitchcock, who founded Homefield with his wife Christa, is a lifelong Indiana fan and was outraged by the outcome of the 2015 Pinstripe Bowl.

Sure, 99 percent of America doesn’t recall the 44-41 overtime thriller that saw Duke outlast Indiana at Yankee Stadium. But Indiana football fans remember it as one more heartbreak, after a field-goal attempt that would have tied the game went over the right upright and was ruled no-good.

“I just remember being so upset at that kick — which was definitely good — being called no-good,” Connor Hitchcock said in an interview with The Athletic last year. “But since we are so conditioned to that pain, we can make a joke of it really fast.”

Hitchcock already had a t-shirt screen-printing operation that functioned as a side business, so he printed a silhouette of Indiana and four words: The Kick Was Good. He sold hundreds of shirts to Hoosiers fans, and the seed of an idea started to grow.

Hitchcock finally decided to leave his day job in August 2018, and he and Christa went all in on Homefield Apparel. They used quality materials and interesting design, but they carved out a niche by focusing on smaller colleges. They felt those schools were underserved, but they also had a more practical consideration: Licensing the names and images from the smaller schools was cheaper than going after the schools that are household names.

The company saw solid growth in 2019, particularly during football season, and looked forward to a huge 2020. Like everyone else, though, they had to adapt when the pandemic hit.

Homefield adjusted and made a production of rolling out new schools, largely mid-majors, in what it called Big New Saturday. Tulane was the first school, and the announcement was a huge hit. As subsequent announcements built momentum, larger schools came calling. By the end of the year, Alabama, Auburn and Florida State had signed on, among others, with each announcement building on the one before.

Homefield heads into 2021 by continuing to add new schools, but keeping the focus on the things that make the brand stand out.

The first thing that jumps out with Homefield’s designs is the vintage look. The authenticity is no accident; Homefield researches each school and unearths real (often forgotten) designs from the past. Tulane’s retro Green Wave shirt, for example, features the logo known as the Angry Wave that first appeared in 1963, and it was the best-selling item of 2020.

Homefield also uses high-quality materials, such as ring-spun cotton, the separate its products from the standard issue t-shirt or sweatshirt.

Because Homefield Apparel has always looked beyond the nation’s biggest schools, its offerings include a number of schools that you wouldn’t expect to find on the average sports apparel site. That includes schools with strong baseball traditions, like Rice and UC Irvine.

Homefield also features some baseball-specific designs, like Vanderbilt’s VandyBoys hoodie (there’s a t-shirt as well) and the Tulane Baseball Tee. And even though it isn’t baseball-specific, you should check out the Radford shirt honoring former mascot Rowdy, just because.

Now the key term for college baseball fans is D1FIFTEEN, the promo code that will get you 15% off your Homefield Apparel order this weekend only!